Is it a vision for a new, more sophisticated app for New Yorkers to pay tickets and request assistance from the city? Or is it an assemblage of leftover slides from some corporate motivational speaker’s PowerPoint presentation?

With several intertwined criminal investigations into his administration, political nonprofits and 2013 campaign underway, Mayor Bill de Blasio sat down with Huffington Post founder Arianna Huffington for a half-hour chat about his just-launched “Digital Playbook.” Rather than talk about any of the ongoing scandals, he instead described a broad vision of increasing municipal responsiveness to the city populace, without divulging what such a system might look like or how it would function.

“We want the information that people need to address the challenges of their everyday lives to be much more accessible. We want them to be able to question and push government to be better. We want them to be able to raise concerns and ideas to government in a much more genuine and effective matter. And we want government to think differently. That it’s our obligation to be in a constant dialogue with our people,” he said, before referring the audience to the website. “You cannot fight the problems of yesterday only with the tools of yesterday. You need the tools of today.”

But the website is even fuzzier on the details than the mayor, presenting a 12-step program of ambiguously uplifting mottos, reminiscent of the one Alcoholics Anonymous made famous. “Make Services Accessible,” “Communicate Simply,” “Reach Out to Residents,” “Test With Residents,” “Organize Around Needs,” “Build City Capacity,” Build On What Works,” “Tie Services & Neighborhoods,” “Create Standards,” “Design For Mobile,” “Engage Private Partners” and “Be Accountable & Transparent.”

The site invites visitors to “Download the Principles and Strategies,” which converts the page into a PDF.

To illustrate his ideas, the mayor whipped out a “Strategy Deck” of cards he said he had disseminated to city employees, filled with helpful tips like “Make services available to all New Yorkers of all capabilities and language preferences,” “Communicate simply and clearly in all languages,” and “Reach out to New Yorkers and invite them to use city services.”

“We’re actually thinking strategically in all of our elements of government,” he said.

Ms. Huffington, for her part, offered helpful prompts about how the Playbook “seems to fit very well into your ‘Tale of Two Cities’ philosophy” and inviting him to “complain” about something he doesn’t like.

Amid the hazy, upbeat talk of replacing “unyielding and unhelpful” bureaucracy with a “response culture and a reporting culture,” the specter of the ongoing fiascos—whether the mayor’s nonprofits fundraised off entities with business before the city, whether his office allowed a developer tied to a consultant close to him to get out of a restrictive deed, whether he violated state campaign finance rules while trying to turn the GOP State Senate blue—briefly seemed to arise again.

“It’s easy to get a little…saddened by what we see in the headlines,” he said, a dour expression passing over his face, before he rapidly shifted subjects. “Somebody could have a great idea in Istanbul, and then we can implement it the next year here.”

About 20 minutes into the talk, it seemed the Playbook might in fact be the drawing boards of an as-yet undeveloped app to replace the 311 system, and a plan to make more city forms available on the Internet. The mayor seemed to suggest a program that would let New Yorkers upload their personal data into a single system that would allow them to interact with all facets of local government, from fines and fees to education to housing.

“If you have to pay a bill to the City of New York, or you have to apply for a service, and your information is now plugged into our system, what about this wild idea? You should only have to do that once. You should only have to give your core profile once, and it should then be held across all agencies,” he said to applause. “All of these pieces are about increased access, greater equality, not leaving any group of people or any neighborhood out of the equation. They all synergize. So we see this effort as connecting and elevating all those other pieces.”

But for now, it seems the Playbook is meant to guide people providing services in the city, rather than serving as a tool for everyday New Yorkers, although the book remains short on actual policy proposals. In response to a thread of Tweets from reporters trying to figure out exactly what the Playbook would do, Chief Digital Officer Jessica Singleton sought to clear it up.

“[W]e feel it’s important to develop this in the open. Today started conversation (1/2),” she tweeted, “with mayor’s first visit to a hub for #civictech in NYC to engage that community directly. (2/2)” 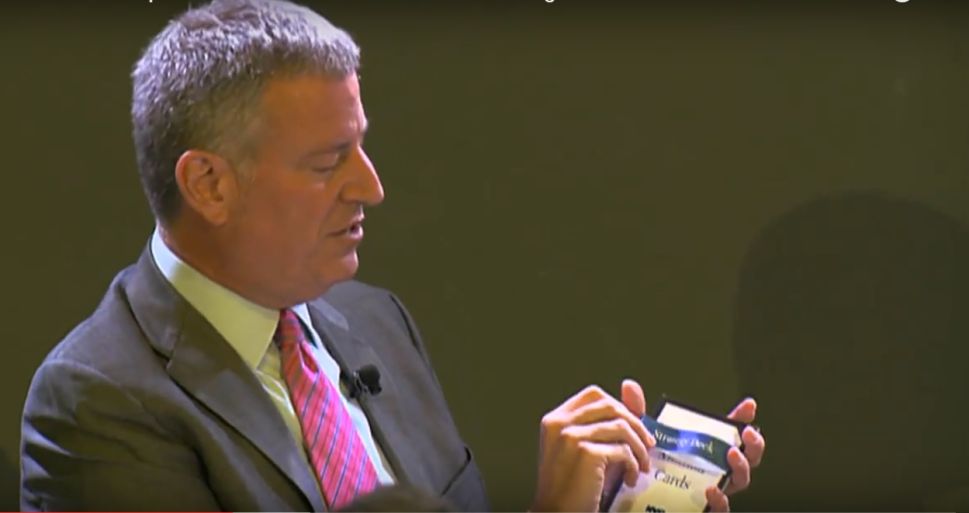