Mayor Bill de Blasio dueled Republican lawmakers in Albany today as he beseeched the state to renew and extend mayoral control of city schools—and as several criminal investigations, including one into his anti-GOP fundraising, threaten to engulf his administration.

The liberal Democrat insisted to the State Senate, which Republicans control through a narrow majority, on the importance of keeping the local education system routed through Gracie Mansion. One of the concurrent probes into the mayor and his team concerns his efforts to get developers and unions to donate to Democratic county committees across the state, which in turn funneled money into Democratic State Senate contenders.

An attorney for the state Board of Elections—an appointee of Gov. Andrew Cuomo, archenemy to Mr. de Blasio and ally of the GOP State Senate leadership—labeled the effort a “willful and flagrant” attempt to flout limits on donations to individual candidates, an assessment Mr. de Blasio has disputed.

“Convince me. Convince me why I should vote for mayoral control, with all the allegations that are going on in your office and your administration,” demanded Senator Terence Murphy, who holds a potential swing seat in the Hudson Valley. “Why I should vote for mayoral control, and why I can trust you to make sure we give the 1.1 million kids in New York City the opportunity to succeed, and make sure the [state outlay of] $9 billion gets spread out evenly.”

Mr. Murphy defeated Democrat Justin Wagner, a beneficiary of the mayor’s fund drive, in 2014, and filed one of the complaints with the BOE that has now morphed into an investigation. Like many GOP legislators, Mr. Murphy argued two years ago that Democratic dominance of the State Senate would result in Mr. de Blasio running Albany—and has already indicated he will campaign on that message again.

Forced to return to Albany to beg again, Mr. de Blasio today asked the Senate to extend the program until 2023.

“If there is such a thing as consensus in New York City, it’s on mayoral control,” he said, noting the support it has received from an array of business and education interests. He also argued it created accountability by leaving the mayor solely responsible for the school system.

State Senator John DeFrancisco, the deputy majority leader and recognized head of the party’s conservative wing, dug into the contract and raises Mr. de Blasio approved with the United Federation of Teachers in 2014. The UFT is one of the groups that gave to the mayor’s controversial now-defunct political non-profits, which worked to promote his agenda, and have snagged the attention of corruption-busting U.S. Attorney Preet Bharara.

In particular, the legislator inquired into the lump sum payments granted to teachers who worked without a contract between 2009 and 2015 under the Bloomberg administration. The contract gave educators retroactive raises for each year in that period, and arranges for the city to disburse the back pay periodically—the math of which was unclear and apparently disconcerting to the state senator.

“If there’s something that’s done while there’s mayoral control, maybe that could change somebody’s mind that maybe you’re not as fiscally sound as you may think you are,” Mr. DeFrancico said. “Since we’re sending so much money out every year at the state, I think it’s a relevant issue.”

Mr. de Blasio was unable to provide the specifics Mr. DeFrancisco requested, but he argued the contract got thoroughly vetted before its approval and allowed for large public savings on healthcare plans

“When that contract was agreed upon, I think it was May 2014, it got an immense amount of scrutiny—from rating agencies, from fiscal monitors, from all levels of government,” he said. “I don’t think there’s any local government in the country that goes through more scrutiny than we do.”

But the tone of the hearing was otherwise civil. Senator Carl Marcellino of Long Island, who chairs the committee, is a retired New York City school teacher who praised Schools Chancellor Fariña today and called mayoral control “integral” to the education system. 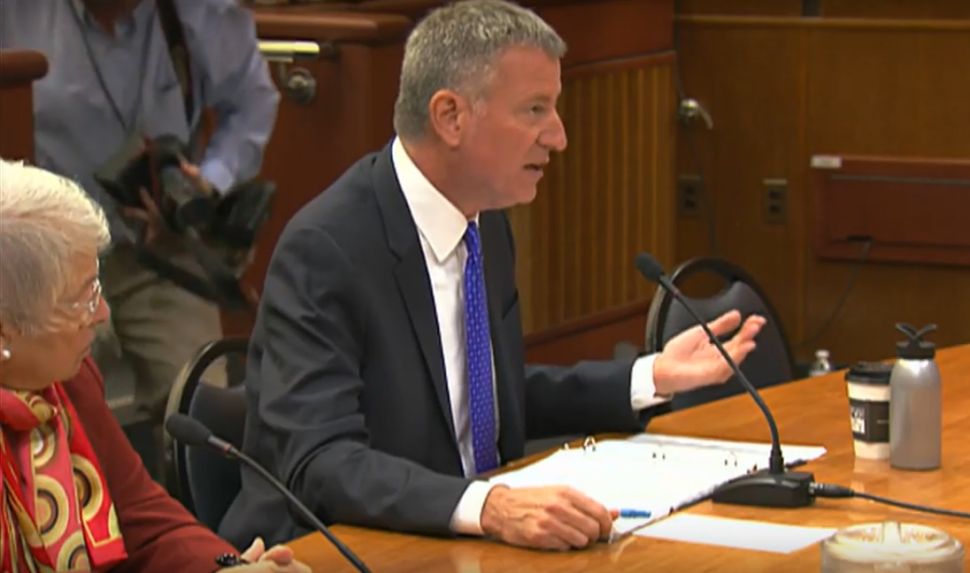