A candidate for a Manhattan State Senate is a former top lobbyist for ex-Mayor Michael Bloomberg and the one-time executive director of the pro-charter school group StudentsFirstNY—but you wouldn’t know it from his campaign literature.

Micah Lasher pushed Mr. Bloomberg’s agenda in Albany from 2010 until 2012, when he got the gig heading up the newly formed New York chapter of StudentsFirst, a national organization that advocates expanding charter schools and eliminating teacher tenure. Now he wants to return to the capital by taking over State Senator Adriano Espaillat’s job representing the Upper West Side, Inwood and Washington Heights—but a large new promotional piece he released in the district contains nary a reference to Mr. Bloomberg nor StudentsFirst.

“In November, Democrats have a great chance, maybe the best in decades, to take control of the State Senate,” the 11-by-16 inch foldout reads. “Micah Lasher is running for State Senate to make sure a new Democratic majority makes New York what it should be—a progressive model for the nation, especially on issues of social and economic justice.”

The piece devotes several paragraphs to Mr. Lasher’s work as chief-of-staff to state Attorney General Eric Schneiderman, a post he has occupied since 2013. It also alludes to his time as “an aide” to Congressman Jerrold Nadler, a job Mr. Lasher held so long ago that he hasn’t bothered to put it on his LinkedIn profile. It does mention once that “Micah’s government experience also includes work as Director of State Legislative Affairs for New York City,” but does not in any way describe who he worked for or what his duties entailed.

The foldout also includes commitments to “support our public schools” and to “close the $4.4 billion annual gap in funding owed by the state to public schools”—a figure apparently derived from the Court of Appeals’ 2003 Campagn for Fiscal Equity, Inc. v. State decision, which ruled Albany had shortchanged the city billions in education funds. Ironically, Mr. Lasher’s main opponent in the Democratic primary, former City Councilman Robert Jackson, was one of the two co-founders of the Campaign for Fiscal equity.

The flyer also features adulatory quotes about the candidate from both Mr. Schneiderman and Mr. Nadler, though none from Mr. Bloomberg nor the StudentsFirstNY board.

“Our campaign literature focuses on Micah’s service in government and what his priorities would be in a Democratic State Senate,” said spokeswoman Ilana Maier, noting the brochure does not mention his years of work as a founding partner in SKDKnickerbocker, one of the state’s top Democratic consulting firms.

Ms. Maier also jabbed at Mr. Jackson for his time as president of the Restaurant Action Alliance, which opposed the city’s styrofoam ban, and his work as a registered lobbyist for the Dart Container Corporation.

Mr. Lasher has already secured endorsements from Councilmen Mark Levine and Ydanis Rodriguez, top lieutenants to Mr. Espaillat. He told the Daily News he would abandon his bid for State Senate if Mr. Espaillat should fail in his third attempt to replace retiring Congressman Charles Rangel, indicating he may be running as a placeholder.

Mr. Schneiderman held the Manhattan State Senate seat from 1999 until 2011, when he won the attorney general’s office and Mr. Espaillat succeeded him. Sources told the Observer the two remain friendly. 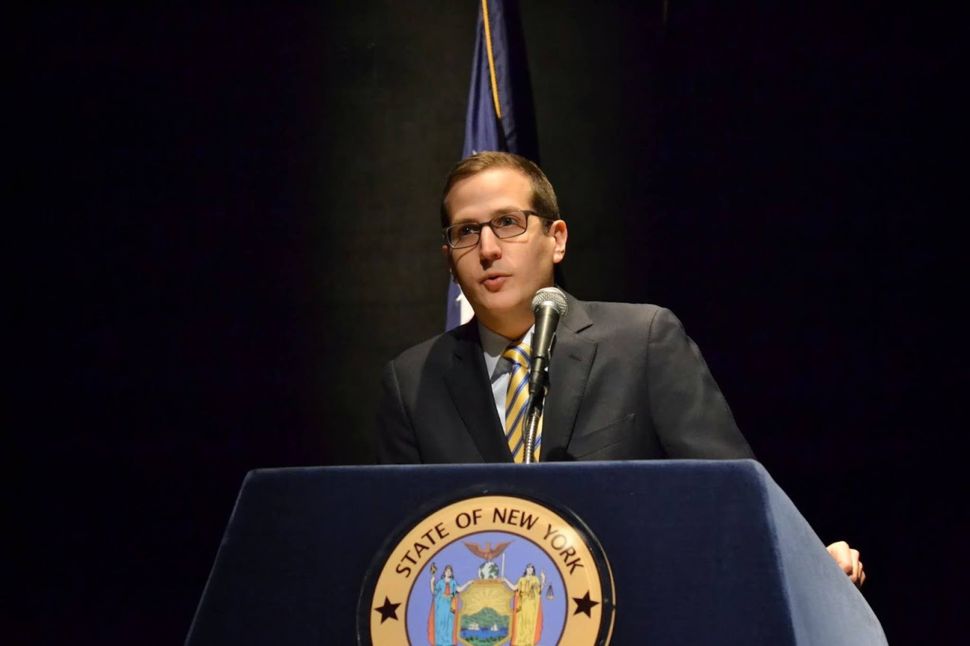