BLACKWOOD — Following narrow defeats in Indiana and West Virginia to Bernie Sanders of Vermont, former Secretary of State Hillary Clinton appeared in South Jersey on Wednesday to rally the troops ahead of New Jersey’s June 7 primary. Though Sanders’ victories this month will offer him a narrow chance at cutting into the one-time first lady’s 94 percent share of the delegates needed to win the nomination, Clinton treated her own nomination as a foregone conclusion at the Camden County Community College auditorium.

Clinton’s appearance in Camden County comes after two Sanders rallies in New Jersey earlier this week, and days before husband Bill Clinton and daughter Chelsea Clinton make appearances in the state on Friday. The latest Monmouth University poll of Democratic New Jersey voters shows Clinton with a lead of 60 percent to Sanders’ 32.

The only opponent Clinton went after that afternoon was presumptive Republican nominee Donald Trump, who she derided as a “loose cannon” with “a tax plan written by a billionaire for billionaires.” Though Clinton also attacked Trump for his volatility and short temper, calling the real estate mogul and former reality star a potential liability for the country’s diplomatic standing, Clinton’s remarks centered on that tax plan and her own plan to create middle and working-class jobs.

“He want stop spend $3 trillion — that’s with a ’T’ – $3 trillion in tax cuts for people like him who make over a million dollars,” Clinton said. “That is $100,000 every month for multi-millionaires. Now to put that in perspective, $3 trillion is enough money to make Social Security and Medicare solvent for the next 75 years.

“It’s enough money to put millions of Americans to work to repair and modernize all of our country’s infrastructure.”

If Sanders got any recognition from Clinton at all during her South Jersey appearance, it was in the laundry list of progressive economic policy issues that she rattled off from the podium. Though she stopped short of promising single-payer healthcare or universally tuition-free public colleges, Sanders’ signature issues of college affordability and expanded access to healthcare got plenty of play in her remarks.

But Trump was the focus as Clinton invoked her experience as the state Senator for New York during September 11 and painted the Republican’s candidacy as feared or disrespected by U.S. allies.

“There’s a lot of concern around the world about his candidacy,” Clinton said of Trump. “Everybody in the world is listening, and that can cause all kinds of complications, even conflicts, if what they hear sounds reckless or unpredictable.”

Quoting Abraham Lincoln, Clinton painted Trump as divisive to both the country and his part and said her campaign would not be addressing Trump’s personal attacks. Earlier this week, Trump called Clinton an “unbelievably nasty, mean enabler” of husband Bill Clinton’s famous infidelity, and called Clinton’s alleged attempts to discredit women who accused the president of harassment “disgraceful.”

“A house divided against itself cannot stand,” she said. “I am not going to respond to the insults and the attacks coming from Donald Trump in this campaign. He can say whatever he wants to say about me personally. I will stand up and fight for and speak out for every American that he attacks and insults.” 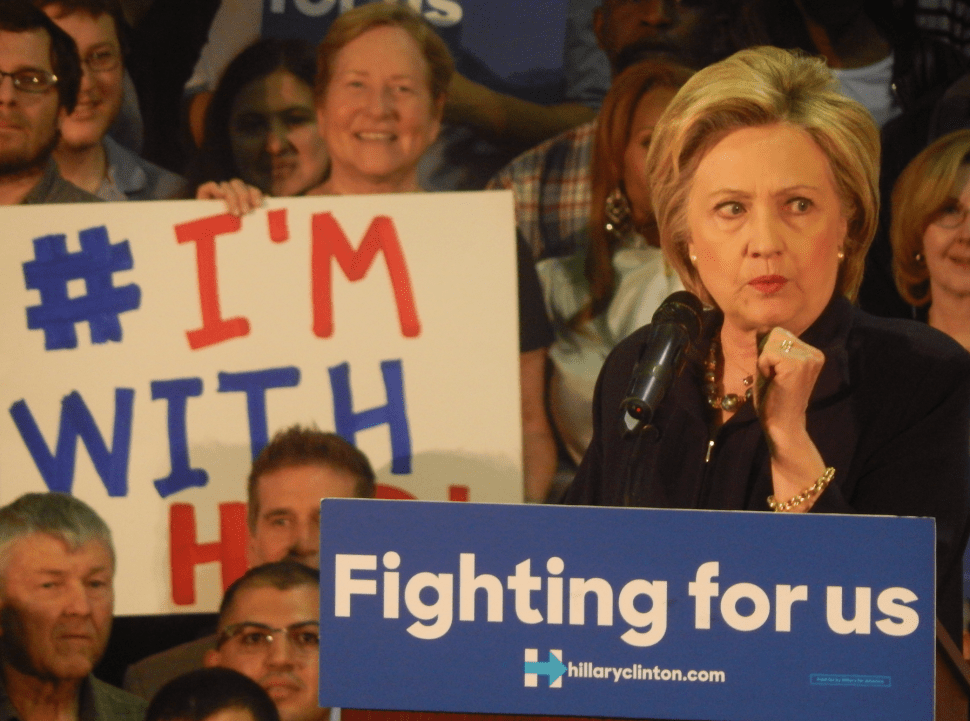