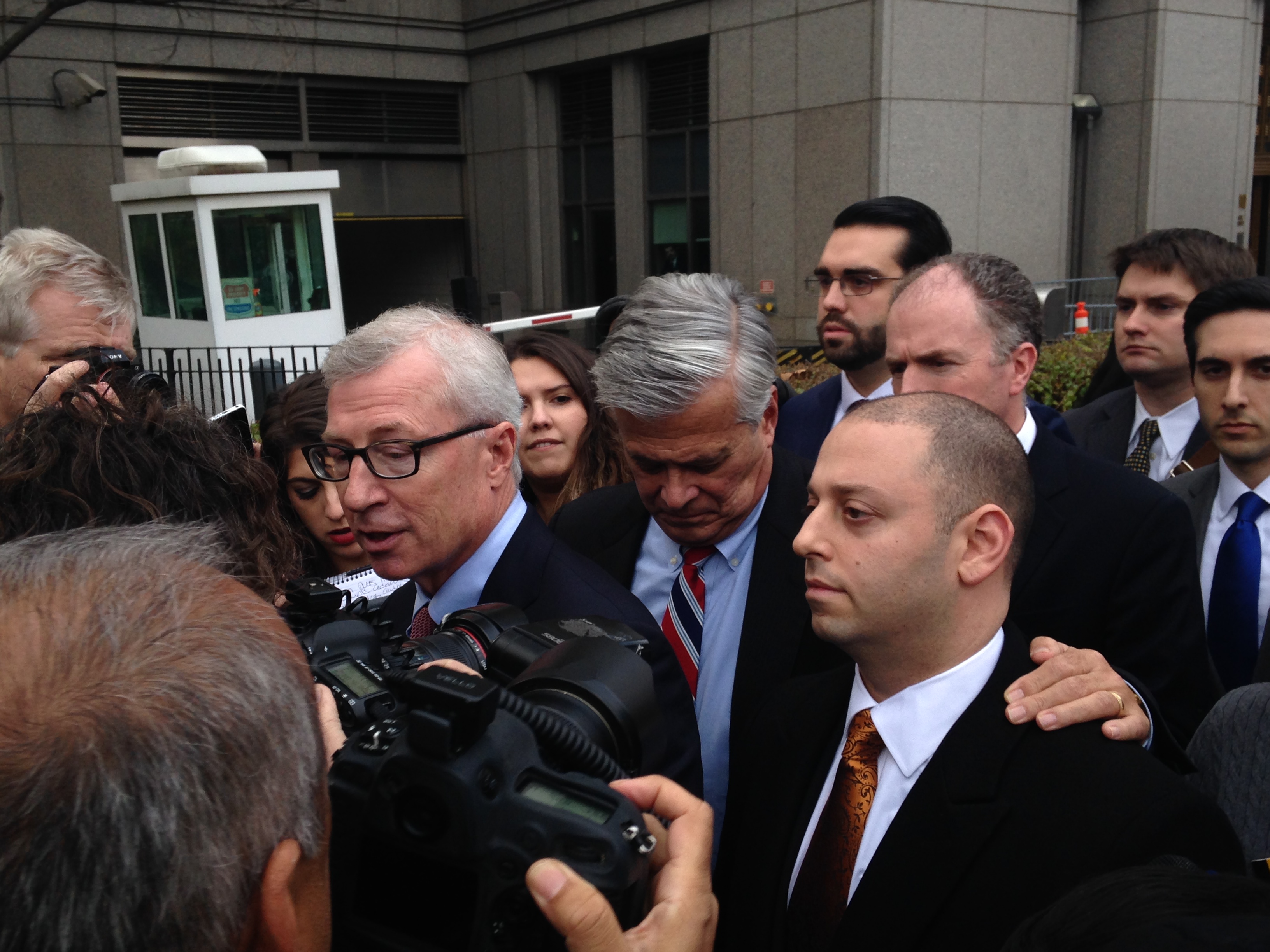 For the second time in two weeks, a man who was once among the most powerful politicians in New York State has been sentenced to prison.

Dean Skelos, the former Senate Republican Leader who was convicted of using his powerful position to land his son Adam Skelos no-show jobs and other perks, was sentenced to five years in prison by Judge Kimba Wood in a federal courthouse in downtown Manhattan today. His son Adam, who was caught on wiretaps physically threatening people over business deals, was sentenced to more than seven years.

“You sent a message that you, one of the three most powerful politicians in New York State, were in some measure corrupt,” Judge Wood told the elder Mr. Skelos.

The sentencing comes the week after former Assembly Leader Sheldon Silver, a Democrat, was sentenced to 12 years in prison in a separate corruption case. Together, Silver and Skelos were two of Albany’s “three men in a room”—a troika, made up of the state’s top two legislators and its governor, that hammers out the state’s budget and other major priorities, mainly behind closed doors.

The former Senate leader told the judge it was “heartbreaking” to stand beside his son for sentencing today, and that he’d tried to protect Adam all his life.

“Somewhere along the way my judgement became clouded,” Skelos said. “Somehow, I let things go off the rails and for that I apologize to Adam.”

Judge Wood seemed to agree, saying that Skelos had a long history of valuable public service, but opted to commit crimes rather than use his vast personal network to find his son a legitimate job.

“You began to ignore what I would call your moral compass,” Judge Wood said.

Mr. Silver’s fall from grace was in some ways more high profile—he’d led the Assembly for decades, while power of the Senate was often in flux—but Skelos’s tumble was perhaps more embarrassing thanks to the heavy use of frequently unflattering wiretapped conversations between Skelos and his son at trial.

Those wiretaps were a major part of the sentencing discussion today. “Your cynicism in abusing your power has been exposed in your own words,” Judge Wood noted.

In sentencing Adam Skelos, Judge Wood noted his use of tactics normally left to professional criminals—including “bullying” and “your predilection for threatening serious bodily harm to those who stand in your way,” in one case threatening to “bash in” the head of a man.

“You appeared to have no moral compass,” she told him, later calling his conduct “appalling.”

The younger Skelos spoke about having to sit through listening to wiretaps that detailed him cheating on his wife (who has now divorced him), threatening people with physical harm and calling Gov. Andrew Cuomo a “pussy.”

“It was hard for me to sit through this case and come face-to-face with the person I was,” he said.

“I know you are all upset with me and rightfully so,” Adam Skelos said. “I just hope that one day you can forgive me and accept me back into this family.”

The drama didn’t end in the courtroom. After the sentencing, the father and soon duo walked out of the court house without taking questions.

As the media swarmed around them, a young man in a blue suit began shoving camera people. When a reporter from the Daily News confronted the young man, he grabbed her wrist and took her cell phone out of her hand, before throwing it across the street. A group of press followed the young man, identified on social media by several reporters as a nephew of Dean Skelos, for a block until he went inside another court building with police and the reporter whose phone he’d tossed.

The trial had focused on three different schemes to extort companies with business before the state into helping his wayward son. In the first, he leaned on luxury developer Glenwood Management to find his son a job, while the company was looking to pass real estate bills in Albany. The company set him up with a one-time payment from a title insurance firm and then with a job at Abtech, a wastewater treatment start-up.

The Abtech job led to the second scheme, prosecutors said: Mr. Skelos then pressured Nassau County to speed up payments to Abtech and support funding for projects that might boost the company, and set up meetings between Abtech and state officials to talk about fracking, which also would have benefited his son’s business.

In a third scheme, prosecutors said Mr. Skelos pushed a medical liability coverage provider into giving his son a job—only for Adam Skelos to rarely show up at work and threaten his boss when he was confronted about his absences.

The younger Mr. Skelos used “burner” cell phones to talk to his dad in an effort to avoid being wiretapped. “You can’t talk normally because it’s like fucking Preet Bharara is listening to every fucking phone call,” Adam Skelos said during one phone call, while Mr. Bharara’s office was indeed listening.

The indictments, trials and convictions of the Skelos and Silver, brought by U.S. Attorney Preet Bharara sent shockwaves through Albany and forced the Senate and Assembly to replace their top leaders last year. It also cast a pall over the deal-making that defines Albany politics, and slowed down the adoption of the budget and resolutions to expiring legislation like rent control. 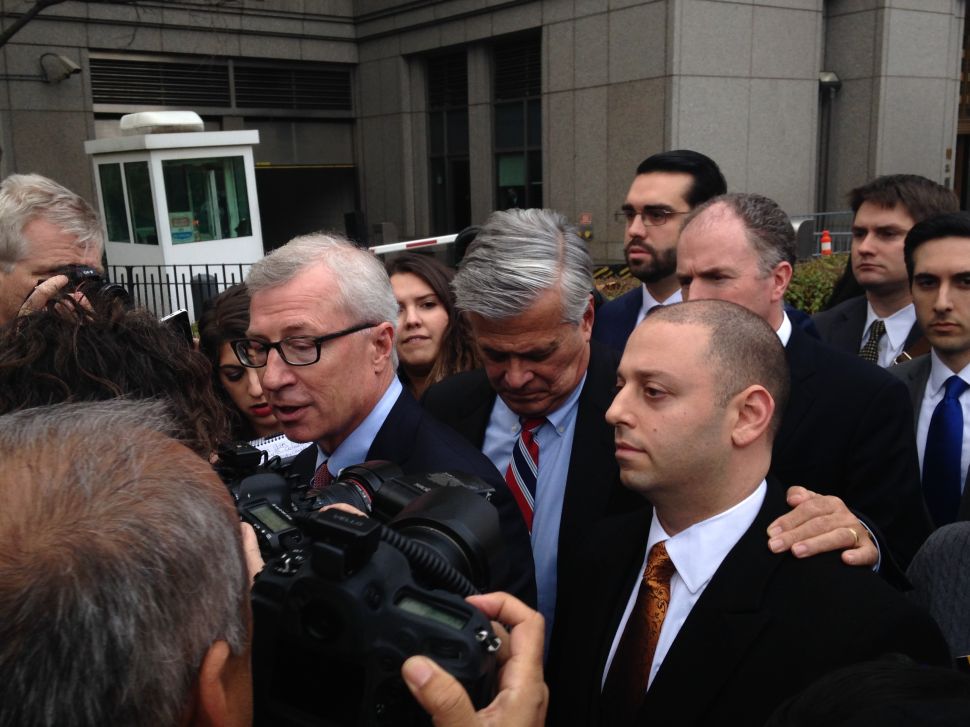