Two weeks ago, The New York Times ran a story about Ukrainian pop-diva Jamala beating her Russian pop-foe during the Eurovision pop-song contest with the song “1944” in which she hinted at the tragic deportation of the Crimean Tartars from Crimea 72 years ago. While the whole world was celebrating Jamala’s victory over Russia just last week—who remembers her name today? Jamala is all but forgotten.

That’s because there’s a new young female celebrity in the spotlight so far as Ukraine is concerned: Nadia Savchenko. The Ukrainian pilot, released from a Russian prison last week, has made Jamala a thing of the past.

Ms. Savchenko is back in Ukraine, with both Ukrainian and Russian political junkies agreeing on one thing: This is political reality TV in the making. Ms. Savchenko will inevitably prove to be somewhat different from her well-crafted image created by Ukrainian propaganda.

The Ukrainian political class is holding its breath.

“It’s not going to be boring,” wrote one Ukrainian journalist on her blog. “Fuck, for the first time in two years I will go to cover the Rada next Tuesday!”

That’s because, next Tuesday, Nadia Savchenko, fresh from two years in Russian jail, will head into work at the Ukrainian Parliament. The first thing Ms. Savchenko plans to do as deputy at the Rada? Remove her own picture from the podium—an emaciated face captioned “Freedom to Nadia. One for all and all for one.”

She is a Ukrainian hero, of course, but the interest in her first steps as a political figure is more due to the fact that Nadia Savchenko—in flesh and blood—is not the icon created by anti-Russian sentiment and a lot of PR.

Ms. Savchenko broke the rules even before she made her first step back onto Ukrainian soil after two long years in captivity. While aboard President Poroshenko’s personal plane that was sent to retrieve her from Russia, she burst into the cockpit, exclaiming:  “I have to see it when we cross the border into Ukraine! Oh! Thunderstorm! Kharkov! Let’s fly to Chuguev!”

In the meantime, an excited and loyal crowd of reporters waited for her in the Kiev airport. To their surprise, the energetic Ms. Savchenko didn’t look at all like the famously emaciated poster displayed in the Ukrainian Parliament. Quite the opposite was true: she looked visibly well fed.

Nadia Savchenko sent a second shock to the welcoming crowd of reporters as she walked barefoot across the runway—no, her new shoes were not tight, she said. She just wanted to feel the concrete of the tarmac on her bare feet. “Ukrainian land heals” she explained the next day.

Surrounded by reporters, Ms. Savchenko began yelling, ordering them to move back and respect her space. “I was jailed for two years! I am not used to people! Do not touch me! If everybody would want to shake my hand there will be nothing left of me!”

She thanked everybody for her release, but refused to answer some questions, responding to one reporter: “You don’t like the question about what you do with your husband in bed, do you?”

She continued, declaring triumphantly, “I am ready to give my life once again for Ukraine on the battlefield!” Ms. Savchenko’s first speech on Ukrainian soil is worth watching, even if you do not understand the language.

Savchenko was happy, excited and unrestrained. Her first wish was to drink two liters of vodka.

“It’s very bad for everyone [in the corrupt Ukrainian political class] when their heroes are [struggling to] stay alive! But we are alive and we will stay alive!” That was the ominous message to a Ukrainian political establishment sick and tired of armed-to-the-teeth heroes of Maidan and the anti-terrorist operation roaming the streets of Kiev.

She publicly humiliated the leader of the Fatherland party Yulia Timoshenko, declining her welcome-home hug. “We are not close enough with each other,” she said to Mrs. Timoshenko, refusing to accept a beautiful bouquet of flowers. The Fatherland party made Ms. Savchenko its celebrity member since the beginning of her captivity, electing her into the Ukrainian Rada in-absentia.

Ms. Savchenko was happy, excited and unrestrained. Her first wish was to drink two liters of vodka.

Shortly after landing, she was taken to the Ukrainian President Poroshenko, from whom she received a Medal of Gold Star. She thanked her mother and sister, her brothers-in-arms, the people of Ukraine and of all the world, but pointedly avoided thanking Mr. Poroshenko or anyone else of the officialdom of Ukraine.

“Ukraine above everything!” ended her speech.

She then went home, to the regular Kiev 16-story apartment building in the sleeping quarters of the city, where her neighbors still remember little Nadia running around with a toy gun playing war games with local boys.

After eating her mother’s borshch, she made her first announcement to the world via Facebook: “For now, I can state only this: I am not going to give up on my habit to kill the Russkies. Glory to Ukraine!” (Her sister later denied Ms. Savchenko having the Facebook account.)

The next day, on her way to meet the press, Ms. Savchenko jumped into a fountain in the center of Kiev.

The two-hour press conference was entertaining.

Ms. Savchenko drank bottle after bottle of mineral (reminding the world of her promise to consume a lot of vodka the night before), wiped her nose with her thumbs every five minutes and shared her thoughts on the variety of questions she was asked—not only from the Ukrainian press and Russian opposition media, but also British, Georgian, German and Polish representatives.

She did not restrain herself. These are her most revealing answers:

Yes, she is ready to be president. “Let’s put it this way,” she said, “Ukrainians, if you need me to become your President, OK, I will be your President.”

By Ms. Savchenko, Crimea will be returned to Ukraine either through diplomacy or right after WWIII begins. She felt like the second option is the more realistic one.

“How to return Crimea? I have a feeling that probably there will be a World War Three. If there is a war, Crimea will come back. If not through war, then Crimea maybe will be returned through international law, explaining to people that they made mistakes. Maybe not to these people, who made them [mistakes], but perhaps their descendants will accept this mistake and will improve it [through repentance].”

Ms. Savchenko was adamant about going to the Ukrainian Parliament Rada, as a deputy to serve her country. “I will go to the Rada in two days,” she assured reporters, although she admitted that she knew only two social institutions so far in her life: army and jail.

And despite the cold shoulder she gave Ms. Timoshenko, Ms. Savchenko will never desert the Fatherland party. “If I don’t feel comfortable with my colleagues, then we will talk [about it] and we will be change ourselves,” she said. These words must have sent shivers down the spine of Yulia Timoshenko, the party leader.

‘Those who love Ukraine must be ready to change themselves for Ukraine.’

She called Russia a “sneaky neighbor,” and Russia’s president much worse.

“Since today I can speak freely, without political correctness… [Putin] is a very unpleasant person—[both] physically and on the inside. I don’t want to use the classic term, but I will use it anyway today: Putin is a Dickface.” (Until recently this was the popular insult used in Ukraine for the Russian president. It’s not used much lately, but Ms. Savchenko, being in jail, still lives in the past.) “My nickname was ‘Bullet,'” she continued. “I will tell you that when people get nicknames, they stick, because they [the people and their nicknames] fit. But if not to use such a term, there is also the word ‘nit.’  There is a louse and there is a nit. So far, I see Putin as a nit.”

Ms. Savchenko’s political platform is simple: Use only Ukrainian language and allow only Ukrainian TV. The program can be reduced to one sentence only: “We are building Ukraine by Ukrainians for Ukrainians. Those who love Ukraine must be ready to change themselves for Ukraine.” By voluntarily not speaking Russian or watching Russian TV channels “We will have everything Ukrainian.”

She is ready to talk with separatists on prisoner exchange and peace, but there will be no tradeoffs on principles. If necessary, peace will be achieved through war.

Russian politicians have called Ms. Savchenko a land mine ready to explode.

“Politically, she is not Russia’s problem anymore,” Russian parliamentarian Aleksey Pushkov said on Twitter, “but Poroshenko’s problem. Now it’s his turn to watch this land mine.”

The leader of Donetsk separatists, Aleksandr Zakharchenko, promised to shoot Ms. Savchenko on the spot if she arrives to the separatists’ region for negotiations. “Kiev wants Savchenko dead,” he said bluntly. “She will be killed [by Kiev] and then they will blame separatists for her death… If Savchenko comes to the front line, we will shoot her on the spot. So when they start blaming us for her death, we will have a reason to be offended.”

It has been already made public to the Ukrainians that President Poroshenko plans to send Ms. Savchenko on a long voyage to Europe. In addition to her spot in Rada, she was also appointed a member of the Ukrainian delegation to the European Parliament while in Russian jail. During her press conference, Ms. Savchenko promised to visit each and every country that pressed Russia for her release to personally thank their peoples. According to her agreement with President Poroshenko, her mission starts in the middle of June. 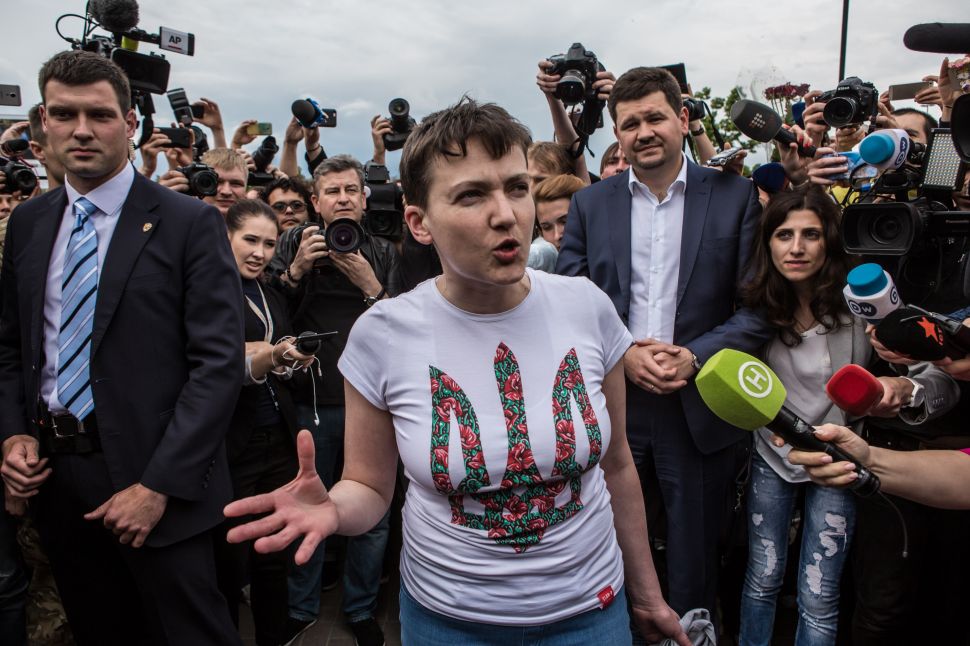