I was about to dig into a $9 vegetarian slider on the Frieze art fair’s chilly patio when a mysterious text popped up on my phone.

“Meet us up front at 2:45” it said, from an unknown number. It took me a minute to remember that I was meeting the Los Angeles artist David Horvitz to discuss his new project for the fair. That was just enough time to inhale my mini burger, question my life’s purpose, and check out a few jazzy paintings before the long trek back to the north side of the tent.

Once there, I reconvened with the helpful PR woman I’d met earlier, who then escorted me to where Mr. Horvitz was finishing up another interview. We exchanged pleasantries before all deciding it was time to go back into the tent and look for “him or her.”

The mystery person we’re looking for is actually an art piece—a professional pickpocket (or more accurately, a “slight-of-hand expert”) that the artist hired to secretly accost fair visitors. But the catch? Instead of taking valuables from Frieze guests, Mr. or Ms. X will be gifting them small sculptures designed by Mr. Horvitz in an edition of 1000.

A silly and kind gesture, though one shrouded in mystery.

“I saw him over here about ten minutes ago,” said Mr. Horvitz, as our eyes darted around the massively crowded fair. After some brief discussion as to strategy (should you move to find a moving target or stand still?), we set off to look for the mystery gifter that Mr. Horvitz had scarcely met himself.

“I interviewed three people and tested them all,” he said about the sculpture-dropper. “This one was the best.”

Mr. Horvitz is said to specialize in projects that “subvert standardized systems and patterns of circulation,” and unlike many conceptual artworks that are often paired with catchphrases that don’t match their outward presentations, I actually felt as if this piece had altered my perception of the fair format almost instantly.

I was no longer considering artworks. I suddenly found myself regarding the various people at the fair: “Was that guy stalking that older lady? The woman in the baseball hat looks very shifty. That older gentleman sidles up very well,” I thought.

But I also engaged with the tent space in a completely different way. We tried to strategize about good areas for sneaking into people’s bags or pockets. Maybe we should try the restaurants. They had a lot of bustle, but also a lot of potential witnesses. The rest areas? People there seem pretty dazed, perfect Marks. The aisles? Tight spaces that seemed perfect for the bump-and-drop.

After about 15 minutes, we ran into another PR woman who was working with Mr. Horvitz. She dipped into her purse to give me her card and Lo! There was a sculpture inside. “I got one!” She screamed into her massive, wide open bag. “I actually do remember someone bumping me, but turned and saw a friend and thought it was her.”

This doubled my already thick layers of suspicion. “Was I being played by Frieze?” I thought.

“It seems like this is staged,” said Mr. Horvitz with a laugh, “but I swear that was a random drop.” It turns out, this person is likely dropping around 250 sculptures a day at the fair, so his story could check out. At this point, we’d been walking around for a half hour looking for this person. Then, suddenly, a text.

“I saw the pickpocket!!!” it said. It was from my art advisor friend who was near the north entrance—where we had started. “He was trying to leave one w/ a lady but kept chickening out lol” said a second text.

OK, so we knew two things now: It was a man and he was careful.

We headed back in that general direction, and then after a full hour of hunting, Mr. Horvitz spotted him. “Okay” he said quietly as he back pedaled to the nearest wall. “He’s over there.”

I looked at a gentleman whose head appeared to be on a swivel, with, hands down, the most active eyes at the fair (a place meant for constant viewing, mind you). I followed him on my own for a bit, trying to be inconspicuous, while studying him. He was always clutching something while observing the crowd. He had the feel of a pro athlete. I noticed his wide view and his precision focus (he studied one woman’s purse with the intensity of a hitter watching a moving curveball before almost making a drop).

He pulled out though, reconsidering the drop, and then slid around a wall toward the bathrooms. I bumped into a dealer I knew and said hello—and just like that—he was gone.

I gave Mr. Horvitz my recap and he seemed pleased. We agreed not to reveal much about said gentleman or the palm-sized sculptures (for the sake of the piece and the brave pickpocket), but if you go to Frieze this week, bring your big pockets, totes and beach bags. And don’t worry if you get jostled a bit in the aisles. 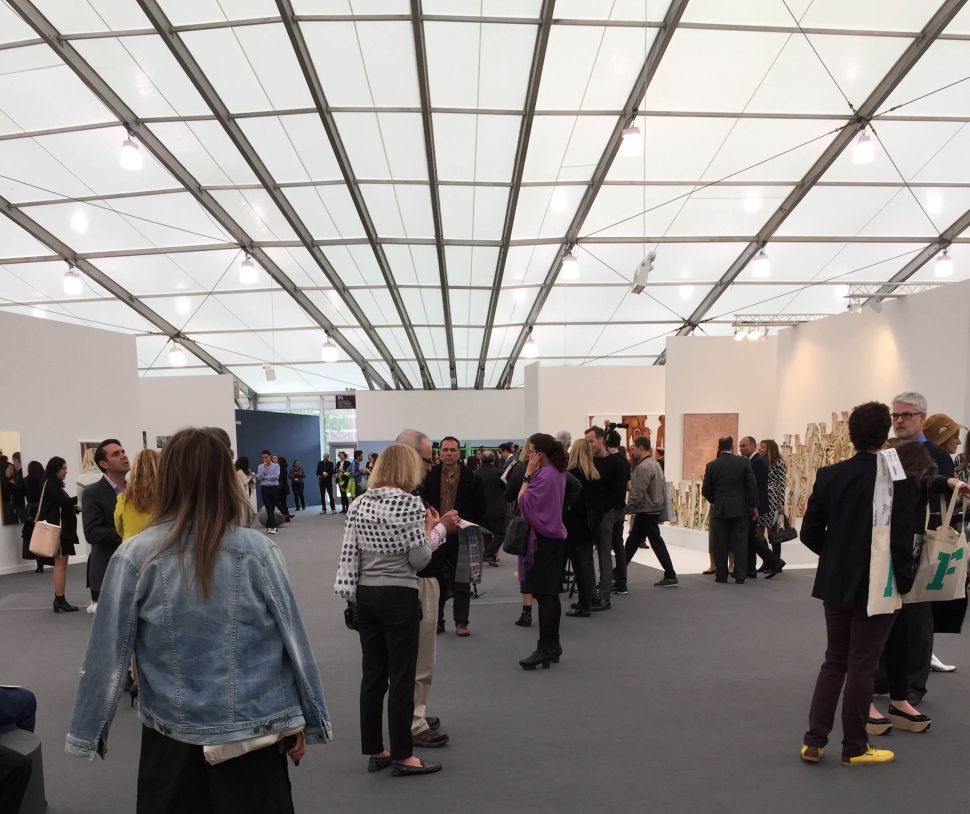