We’re not going to lie, it was real hard to get to Frieze New York. But it was well worth it. After an hour long taxi ride to Randall’s Island—a narrow, forgotten slip of land between Manhattan and Queens that most New Yorkers don’t even know exists—we arrived at a snaking white tent with a giant baby-shaped balloon floating over its entrance. The airborne infant was an artwork by American artist Alex Da Corte and a harbinger of the whimsical and wild works we’d find inside.

Frieze has hit its groove in its fifth year in the U.S., and even gotten a little weird. The transplanted British art fair showcased bigger and more ambitious projects than ever before, some of which included robotic dogs, live donkeys and mimes. One artist’s work was just to stock his booth with cases of the meal supplement Soylent, which were handed out to fairgoers for free.

But the talk of the town was Gagosian Gallery’s booth, showing works by YBA bad boy Damien Hirst for the first time since he split with the megadealer in 2012. Mr. Hirst is now reunited with the gallery and a sampling of his greatest hits are being shown at the fair. But one among them, a wooly sheep preserved in a tank of formaldehyde aptly titled Black Sheep with Golden Horns, was of particular interest to fairgoers following reports that the artist’s sculptures are prone to leaking toxic fumes.

“People have been asking me about it all day,” said Gagosian dealer Ken Maxwell. “But, that was a specific case,” he said, referring to the works shown at the Tate Modern in 2012 that sparked concern.

A recent article In the scientific journal Analytical Methods found that high levels of carcinogenic gas were emitted from the sculptures, though not enough to be considered harmful to the public. According to Mr. Maxwell and two spokespeople for the gallery, all the formaldehyde works are in working order. Another representative (how many flacks does one gallery need?) said the gallery has an air monitoring system installed in its booth at the fair.

“It’s not unlike a bronze sculpture that’s been put outside and collects patina,” said Ken Maxwell of Gagosian Gallery. “Works have to be kept up.” Such challenges come with the territory of using new and unconventional media, he said.

“Collectors that buy this know what they’re getting into,” said Mr. Maxwell. “People aren’t passing out—everyone at Frieze isn’t going to sleep.”

In a statement sent to the Observer by email, a spokesperson for Science Ltd (the company that works with Mr. Hirst on his formaldehyde sculptures) said: “We do regular testing and our experts tell us that at the levels reported your eyes would be streaming and you would be in serious physical discomfort. No such complaints were made to us during the show—or at any other sites featuring the formaldehyde works. We don’t believe any risk was posed to the public.”

A woman interrupted our chat with Mr. Maxwell and said, “Are you talking about the formaldehyde works? Forget about it! My friend Stevie Cohen, who bought the shark, I went over there and when I left I was sick for two days, and it was from the fumes,” she said. (We assume “Stevie” to be hedge fund billionaire Steve Cohen, the confirmed owner of Mr. Hirst’s 13-foot preserved tiger shark, titled The Physical Impossibility of Death in the Mind of Someone Living. In 2006, the piece had to be repaired after it began to disintegrate.)

Perhaps the sight of a dead shark was the real cause of her illness? “No, it was the fumes,” she said. The gallery would not disclose the price of the formaldehyde sculpture, nor the status of its sale.

But the pickled sheep wasn’t the only oddity we encountered. Artist Sean Raspet, who happens to be a consultant for the Los Angeles-based startup company that makes Soylent, filled Societe Berlin’s booth with refrigerators full of the soy-based drink. “I drink it all the time,” a representative for Soylent told the Observer. “It tastes like milk after cereal.” While we opted to take one and save it for later, fairgoers flocked to the booth to grab a bottle as an alternative to the pricey and crowded food vendors.

Stand out, fantastical moments came elsewhere from Victoria Miro’s booth, who was showcasing Japanese artist Yayoi Kusama’s tendril sculptures springing up from the floor. Dozens of dolls made of burlap and cloth by Jos de Gruyter and Harald Thys lined a wall inside Gavin Brown’s Enterprise for their project I Piccoli Pupazzi Sporchi di Pruppa (The Small Dirty Puppets from Pruppa). Heather Phillipson’s kinetic sculptures of dogs with wagging tails and animated faces dotted the fair.

Artist Katherine Bernhardt proved one of the most colorful spectacles of the day. She was asked to curate Canada’s booth and she chose to fill it with several of her own paintings, and works by friends such as Elizabeth Ferry, Katie Stout and Elisabeth Kley. To top it all off, she lined the floor with vibrant Moroccan rugs. Meanwhile, Andrea Rosen had not one but two spooky installations: a work by Hayden Dunham which featured a black pool of liquid spewing rolling white fog, and a room-sized work by David Altmejd that included a series of grotesque and lifelike heads.

As for celebrities, we didn’t see Leonardo DiCaprio ourselves, but were assured he was there (somewhere), and shown photographic evidence on a friend’s iPhone. In the blurry photos, the Oscar-winner appeared to be accompanied by actor Adrien Brody and a curiously dressed Tony Shafrazi, clad in a beanie and oversized jeans. We also spied auctioneer Simon de Pury in bright orange sneakers and Russian collector Dasha Zhukova somewhere in the crowd.

Another unforgettable big attraction on preview day also prominently featured wildlife—this time alive. A restaging of Italian artist Maurizio Cattelan’s first New York show was simply comprised of a donkey and a chandelier in a room. Visitors stood in line to enter in small groups, and inside a donkey named Sir Gabriel napped standing up, and occasionally rolled in a hay pile on the floor.

“Smells better than the Hirst booth!” one visitor announced, as he gave a quick glance to the donkey and swiftly left the room. 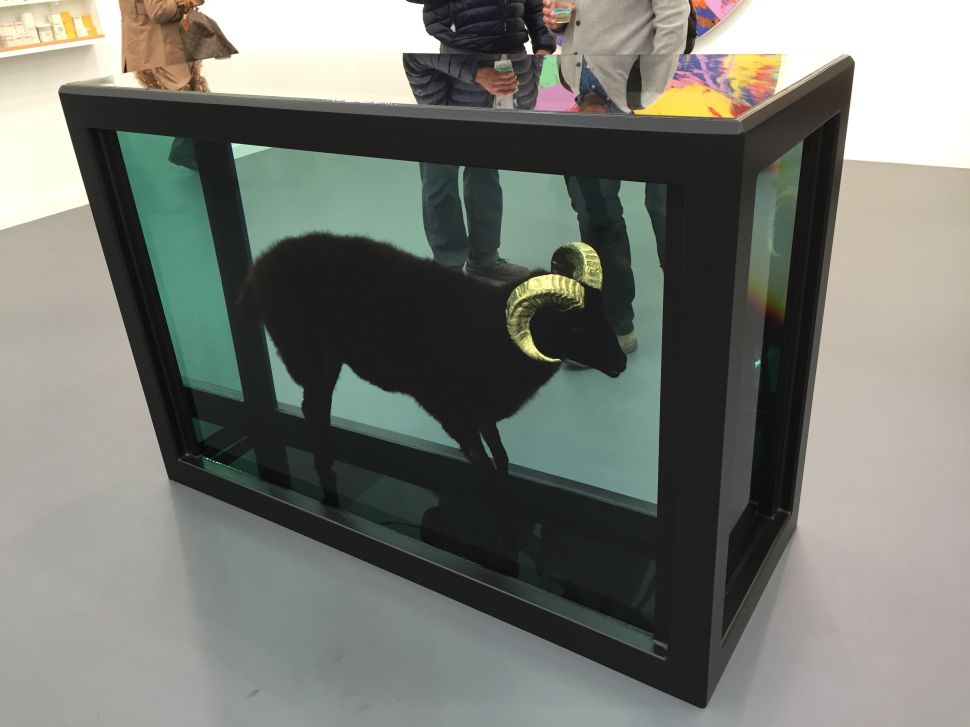