Like a cheap, drunken night at a Braavosi brothel, Game of Thrones usually leaves us with far more questions than answers. Each week, we’re going to take a deeper look into every single Q HBO’s fantasy mega-hit needs to A. Next up: Jon-gods, Towers of Joy, and Christmas morning for Ramsay Bolton.

What’s next for our living, breathing Jon Snow?

“They think you’re some kind of god,” we hear in this week’s preview, which could either be Tormund speaking to Jon or any human being with functioning eyes speaking to Kit Harington (haha, sorry Arya).

The Wildlings are a suspicious lot, partially because they’ve actually seen the danger posed by the White Walkers and also because they roll with straight giants. So the idea of someone who was definitely dead a minute ago–even someone they respect enough to slam grown men into walls over–rising from his slab like the world’s prettiest Frankenstein monster is going to freak them out something fierce. And the person who brought him back in the first place, Melisandre, isn’t exactly best buds with the Wildlings considering she set their king on fire.

As for Jon himself…who can say it’s even Jon? In season three’s “Kissed by Fire,” which in hindsight is looking more and more like the most pivotal episode of Game of Thrones‘ run, Beric Dondarrion tells Arya he loses a little piece of himself every time Thoros of Myr brings him back from the dead. What parts of Jon are missing? His sweet sword skills? His memory of cave boners? The Westerosi social skills that kept him from wearing a man-bun?

Either way, I’m pretty sure we can agree Jon’s first move should be waltzing into Alliser Thorne’s cell, so we can see Olly quite literally shit his britches.

What’s beginning? What’s ending? Who are these people?

Thanks to Bran and his Three-Eyed Flux Capacitor we’ve once again gone back in time, to the Tower of Joy. (You get a glimpse of the tower behind Dayne, as he draws two swords like a stone-cold badass) Elsewhere, Robert Baratheon is busy taking the Mad King Aerys Targaryen off the Iron Throne but this particular altercation is far more personal. Allegedly, Aerys’ son Rhaegar kidnapped Ned’s sister Lyanna and hid her away in this tower, leaving Arthur Dayne, Ser Oswell Whent, and Lord Commander Gerold Hightower as guards. Ned shows up, pissed right the heck off, with Howland Reed, Lord Willam Dustin, Ethan Glover, Martyn Cassel, Theo Wull, and Ser Mark Ryswell. There’s a massive fight, and everyone dies. Everyone, but Ned and Howland Reed.

And that’s just the beginning of the intrigue, people. After the fight, Ned and Howland rush to the top of the tower to find Lyanna dying in a bloody bed. Her last words: “Promise me, Ned.” Promise her…what? Well, a theory that is 99.9% a fact at this point is Lyanna’s bed was blood-covered because she just gave birth to a baby boy, a boy she makes Ned promise to claim as his own bastard. And as we know babies are known to take long naps, but this baby just woke up:

Yesir, Jon Snow is the love child of Lyanna Stark and Rhaegar Targaryen, making him both ICE and FIRE. Is Bran about to learn his brother’s true heritage? This would make him only one of three people to know the truth; him, Ned Stark, and Howland Reed. Oh, and who is Bran literally chilling with North of the Wall? Meera Reed, Howland’s eldest child.

Now it ends? No, Ned, we’re just getting started.

What is Ramsay Bolton’s “gift”?

Pretty much any gift that can make Ramsay Bolton smile like a damn child on Christmas morning is going to be unpleasant. Dude just stabbed his father in the heart and fed his mother-in-law to a pack of dogs. If the gift is something gross, let’s at least make it a lamp made out of human skin so we can actually see what’s happening in Winterfell.

But no, talk of the town is that the gift isn’t so much a “what,” as it is a “who,” that the bearded man up there is an Umber and he’s presenting to Ramsay none other than the long-lost Rickon Stark. The last time we saw Rickon, he was off with Osha to the home of Jon Umber, who was tight with the Starks back in the day. Unfortunately, since then Jon Umber and roughly 90 percent of the Stark family have been killed, and allegiances in the North aren’t what they used to be. Almost as if the Umbers took an oath, brought it to this episode entitled “Oathbreaker,” and broke it.

What is about to happen to these poor, innocent children?

As far as King’s Landing is concerned, I’m far more interested in what Cersei and my boy Ser Robert Strong are up to. Update: Ser Robert Strong is still super tall and mute as hell. As for Cersei, we hear her spitting “If someone is planning on making our losses their gains, I want to hear it.” A quick list of people currently planning to make the Lannisters losses their gains: 1) Dorne 2) Tyrion Lannister 3) A whole fleet of Greyjoy pirates 4) High Sparrow 5) Ramsay Bolton 6) Some, if not all, of the dragons in the world.

Which might sound overwhelming, but then you remember the quick fix to pretty much all these problems: 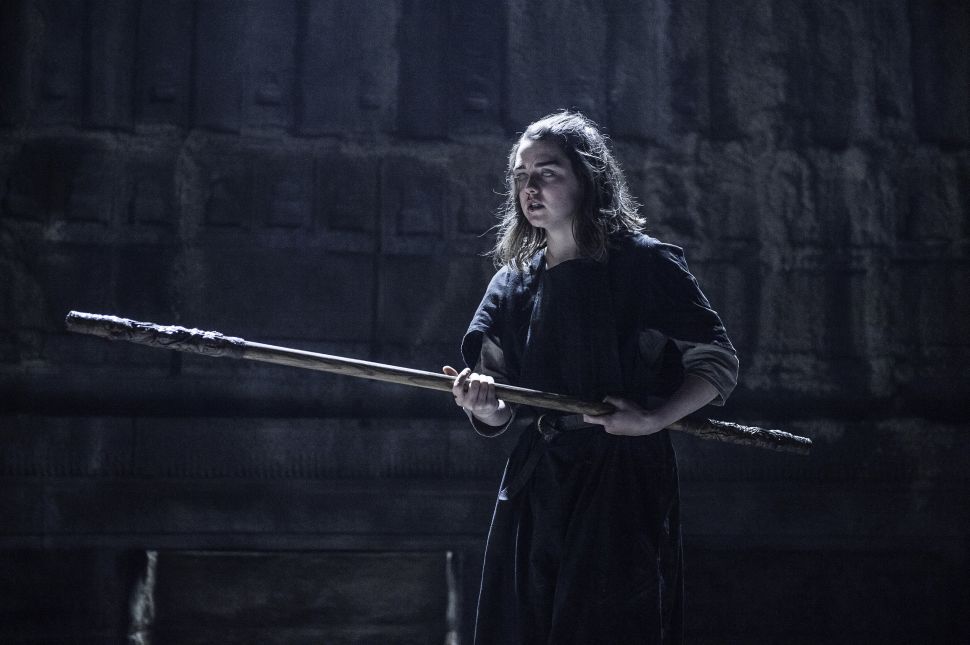 Filed Under: TV, Game of Thrones