Like a cheap, drunken night at a Braavosi brothel, Game of Thrones usually leaves us with far more questions than answers. Each week, we’re going to take a deeper look into every single Q HBO’s fantasy mega-hit needs to A. Next up: Sansa’s Dream Team, Little Fingers, and A Good Day to Die Hard (Because of Greyscale)

Where is the Dream Team arriving so stoically?

Castle Black, which is quite incredible, since according to this Winterfell is 605 miles away from The Wall. It’s incredible how fast you can travel when fueled by nothing but Ramsay Bolton terror and the legitimate possibility of literally freezing your ass off.

Unfortunately, Sansa, Brienne and Pod headed North with the intent of finding a safe haven and a familiar face in Jon Snow. Super-duper-double unfortunately, what they will actually find includes, but is not limited to: A 14-year-old boy hanging from a noose, a 400-year-old witch that one time gave birth to a demon baby, an entire race of people that Sansa’s family spent generations slaughtering, a giant, and the knowledge they are now the first line of defense against the ancient race of wizard snowmen slowly lumbering south with their army of blue-eyed corpses.

Oh, plus the recently resurrected Jon Snow, who against all odds actually returned from the dead even mopier than before. This is going to be an even more awkward family reunion than the Lannisters, a family whose tree goes in an actual flat circle because of all the incest.

What does Littlefinger want?

Honestly, at any given point it’s impossible to decide what Littlefinger wants. To keep a Lannister off the Iron Throne? To get Sansa to safety? To pick an accent and, you know, just stick with it?

This is the first glimpse we get of Petyr Baelish in season six, presumably because he was off concocting ass-backwards schemes that will somehow work out in his favor. Here, he’s telling little Lord Robert Arryn, whose cape game is still stronger than his actual body, the news of Sansa’s escape from Winterfell. I’m not quite sure the tactical advantage of telling Robert this because A) Robert’s bones are made up of the shells of baby dinosaur eggs and B) They are roughly 4 bajillion miles (as the crow flies) away from Sansa, the Boltons, and Winterfell.

Is it too late now to say sorry?

For Theon’s sister Yara, apparently the answer is yes. To be fair, the last time Theon and Asha were in the same room Theon was locked in a dog cage and refusing Yara’s rescue attempts. Also to be fair, though, Yara forgetting about the time in season one where she sort of tricked Theon into almost having sex with her.

There’s a lot of pent up aggression here, is what I’m saying.

Like Sansa, Theon is arriving at his destination at pretty much the worst time possible. His father is dead, recently thrown off a rope bridge that honestly he would’ve fallen off by himself eventually, and his insane, possibly-a-sorcerer Uncle Euron is running the show. There is also about to be a Kingsmoot, which in Pike terms is basically the US presidential election except it’s run by pirates and decided by who has the biggest treasure chest and can shout the loudest. So actually it’s exactly like the US presidential election.

Are Margaery and the High Sparrow about to become BFFs?

Hard to tell. Margaery is in a way worse spot than Cersei. Cersei’s pretty much good. Cersei’s like “Oh I choose trial by combat also my champion is Jason Voorhees wearing armor.” But Margaery, who is being accused of basically the same crimes as Cersei, doesn’t have that luxury. I mean, who’s going to fight for her? Loras? Loras is an okay choice. Loras Tyrell is like the Floyd Mayweather to Ser Gregor Clegane’s Mike Tyson. Sure, Loras is super crafty, but Robert Strong is going to straight up smash your face.

The more interesting thing here is that the idea of Margaery’s public confession is bringing together the Lannisters and the Tyrells. The Tyrells don’t want this course of action because it would just be a PR nightmare, oh my goodness. And Cersei doesn’t want this because if 90 percent of King’s Landing confessed anything it would probably somehow make Cersei look bad. Cersei has a lot of skeletons in her closet. Well, at least the skeletons Qyburn hasn’t taken into the basement yet.

The solution? I say strap some armor on to Tommen, tell him there’s a chance he’ll never have any of that sweet marriage night sex again, and have him fight in Margaery’s trial by combat.

Can these two put their boners away long enough to save Daenerys? 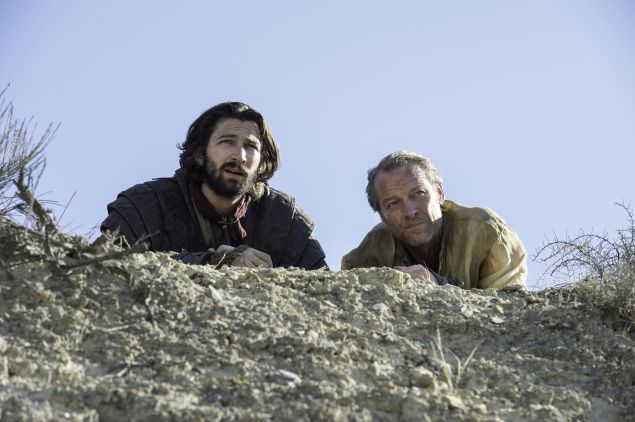 Game of Thrones has really squandered the opportunity for the buddy-cop spinoff that is the tale of Daario and Jorah, Dany Rescue Squad. So far, all we’ve really gotten is this conversation:

Jorah [slowly dying of Greyscale]: “I think Daenerys is like, the best queen.”

Daario: “Haha, no, it’s me that thinks Danaerys is the best queen times infinity.”

Jorah: “I saved her from poison once.”

But no, it looks like this week these two go full Lethal Weapon on some old, retired Dothraki widows in order to save Dany from a life of passive-aggressively sitting around a fire pit waiting to die. Which is cool, whatever, but there’s also that DRAGON flying around somewhere, which the Dothraki would probably find more intimidating than “two sweaty dudes, one of which has an incurable disease.” 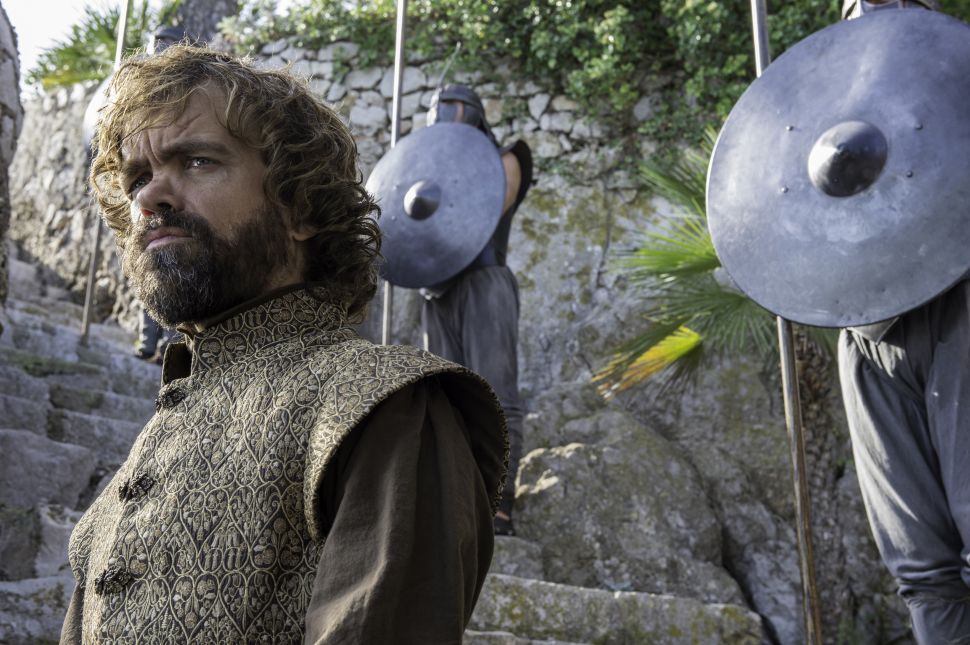