Like a cheap, drunken night at a Braavosi brothel, Game of Thrones usually leaves us with far more questions than answers. Each week, we’re going to take a deeper look into every single Q HBO’s fantasy mega-hit needs to A. Next up: Some heat for your cold hands, a long walk home, and the possibility of Daenerys Targararyen doing something logical.

We gonna’ need some mittens for these COLD HANDS?

Despite Hodor’s sacrificial door-stopping last week being, in pure literary terms, “courageous as balls,” Bran and Meera Reed aren’t out of the deep, snowy woods yet. As you (probably can’t) see in that super-dark GIF up there, Meera is still desperately dragging the sack of potatoes known as Brandon Stark away from an entire army of unstoppable zombies. “I’m so sorry,” she says, which Bran does not hear because he is still dreaming about the time his dad got advice on the Winterfell playground.

Keep in mind, minus Craster’s Keep, Hardhome, and a few pockets of Thenn’s just bone-munching around, the land north of the Wall is an desolate, icy hellhole that extends miles and miles without civilization, depending on how civilized you find Grumkins and Snarks (Note: You will NOT find Grumkins and Snarks civilized). So just because they got out of the Three-Eyed Raven’s Treehouse, does not mean they have anywhere to go. In the books, Bran and Meera (and Jojen, before a corpse killed him) found themselves in a similar situation before a savior arrived astride what could only be called, in pure literary terms, “a big-ass elk.”

Out of all the mysteries debated over inside George RR Martin’s novels, Coldhands is one we know the least about. Basically, this dude shows up out of nowhere riding a moose, hides his face behind a handkerchief at all times, smells like”dead meat, dry blood, a faint whiff of rot. And cold. Cold all over” according to Summer. To be fair, replace “moose” with “New York City bus” and you have most of my morning commute. Nevertheless, Coldhands escorts Bran and Co. to the Three-Eyed Ravens cave, and doesn’t even try and eat them or anything along the way. However, he can’t actually go inside the cave because, as a Child of the Forest helpfully explains, “[White Walkers] killed him long ago.” Bran, being Bran, does not ask a follow-up question.

So, who is Coldhands? A whole lot of theories points to Winterfell’s resident Cool Uncle, Benjen Stark, who has been M.I.A since season one. The White Walker’s ability to bring the dead back to life would explain how Benjen could die and come back as Coldhands, but NOT why he’s lucid enough to steer a 730 pound antler-beast through a blizzard.

How awkward is the Tarly family reunion?

Remember that time you brought your girlfriend over to meet your parents but TOTALLY SPACED on telling them she used to live in a shack in the woods with her father that was also her husband? Haha…high school, man.

Gilly’s less-than-spectacular past isn’t the only reason Sam returning to Horn Hill makes for uncomfortable dinner side-eye. His father, Randyll Tarly, is in the running for “least chill dude in Westeros,” jumping ahead a few spots in the polls ever since Balon Greyjoy and Stannis Baratheon died. Randyll essentially forced Sam into the Night’s Watch by sword-point for the same reason the show Friday Night Tykes exists. It doesn’t help that Sam’s brother, Dickon Tarly, puts the “dick” in his own name / is everything Randyll Tarly wants in a son.

But hey, look at Sam has done since leaving home! He shows up with a pretty new girlfriend, a baby that, for all Randyll knows, Sam made through sex, and the ball-swagger of being one of three people alive to kill a White Walker.

What shenanigans are about to ensue during Margaery’s Walk of Atonement?

Jaime Lannister, who in that GIF has never looked more like Prince Charming from Shrek 2, rides up with a damn army behind him to the steps of the Great Sept of Baelor seemingly just as Margaery was about to begin her long walk home (A far less unpleasant experience than 199o’s The Long Walk Home, starring Oprah Winfrey).

“Show them what we do to our enemies,” Cersei spits in the preview. We should probably ignore the fact that, so far, what the Lannisters do to their enemies is “let them murder our family members.”

Bad timing, too, because Tommen looks to be getting kind of chummy with the High Sparrow. Take that into account, plus the fact Margaery’s brother is still locked up in a cell somewhere, multiple that by a Lannister cousin, Lancel, being a highly-devoted member of the Faith Militant, and then subtract everything by Sir Gregor Clegane showing up and doing this but to like, 50 different people.

Is Daenerys FINALLY headed back to Westeros?

Supplemental question: Shut up, Daario. “Now that Old-Balls McGreyscale is gone, did I mention how pretty your hair looks, oh conqueror queen of my loins?”

But no, it’s Daenerys’ reply I’m interested in: “I take what is mine.” Yeah, since Tyrion is stuck being the only person with a penis in a room with three dudes and a woman, Dany will probably have to make a quick pit-stop in Meereen. Plus, all those slaves she freed, or whatever. BUT, Game of Thrones has slowly been hinting that Dany is newly-focused, newly-energized, and newly-reminded that FIVE seasons ago she wanted to take back the Iron Throne so bad, she walked into an inferno and hatched three dragons. That mission is…pretty much why this story exists in the first place. It all centers back around to Dany, who herself is busy circling a city in the desert where 99 percent of the population wants to cut her head off.

Daario may be a bucket of hair clippings and forehead grease collected on the floor of a barbershop, but he has a point. You’re a conqueror, Daenerys. Go conquer places we care about! 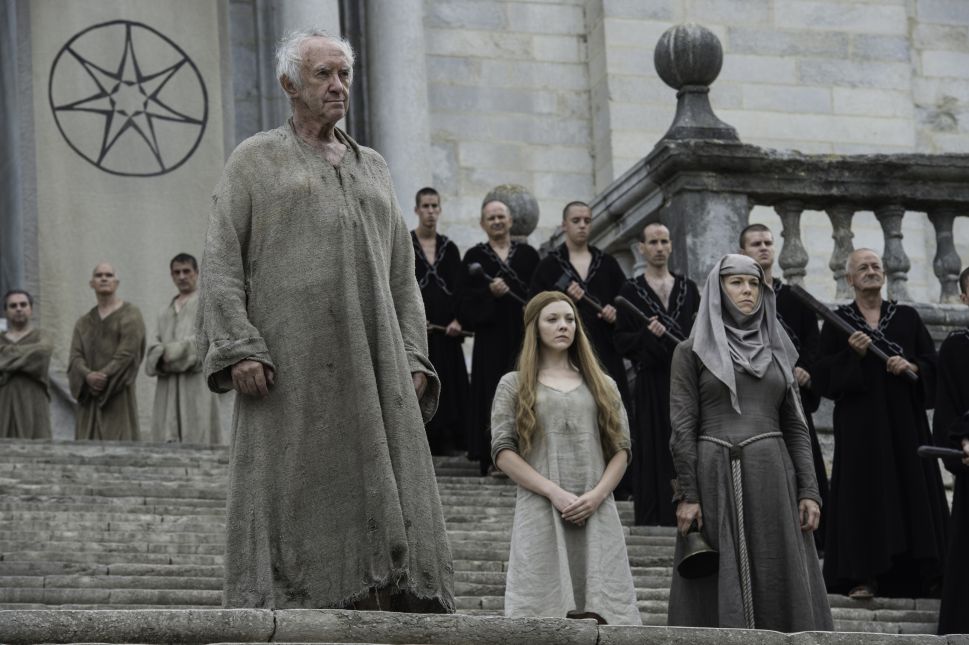