Today, HBO released a number of new images from Game of Thrones’ upcoming installment, “Oathbreaker.” There’s an interesting shot of Tyrion, as you can see above, and a closer look at Daenerys’ journey through Vaes Dothrak, and also OH MY GOD NO, CHILDREN, STAY AWAY FROM QYBURN.

A quick history of Qyburn, a character who in no circumstances should be left in a room full of children: He’s a maester, or, WAS a maester, before all his buds back in Oldtown were like “Qyburn please stop cutting up dead bodies” and SPOILERS Qyburn did not stop cutting up dead bodies. In fact, cutting them up was just the beginning of some unimaginable pet-projects. A quote, from Season 5: “The Citadel stripped me of [my maester’s chain]. They found some of my experiments…too bold.”

Too bold for the maesters, yes, but not for Cersei Lannister, who got a hulking, undead bodyguard out of the deal. But before Ser Robert Strong was smashing skulls out in King’s Landing, he was a twitchy mound of meat lying on a slab in Qyburn’s Frankenstein lab underneath the Red Keep.

Which brings us full, horrifying circle because that lab is now filled with young, innocent children and this mad scientist is eyeing them the way Robert Baratheon would eye a prostitute covered in roast chicken.

There are two possible scenarios where this doesn’t turn into an alt-universe episode of Bill Nye the Science Guy where Bill Nye has been replaced with Ed Gein. For one, Cersei officially appointed Qyburn Master of Whisperers, since Varys is in Meereen babysitting dragons. Varys, at this point, was well known for utilizing a vast network of “Little Birds” to gain secret information. And who better to serve as little, snooping informants than a group of children? Maybe Qyburn is just taking his promotion really seriously, and we’re looking at something as innocent as a job interview.

Or, alternatively, not that. Game of Thrones never goes for the pleasant route, and it’s far more likely Qyburn is simply a terrifying human who enjoys conducting affronts to God in his laboratory, and these children will soon be mindless, undead agents of all things stabby and terrible. Which…might be helpful pretty soon. After all, Qyburn DID spend at least a little time in Oldtown, the oldest city in Westeros, which means it isn’t impossible he’s privy to info on, of all things, the White Walkers. As we know, the White Walkers are lumbering toward the Wall, dragging thousands of blue-eyed corpses behind them in preparation for the battle to end all battles. Light vs. Dark, Cold vs. Heat, Ice vs. Fire, Good vs. Evil and, maybe, thanks to Qyburn, Zombie Children vs…. 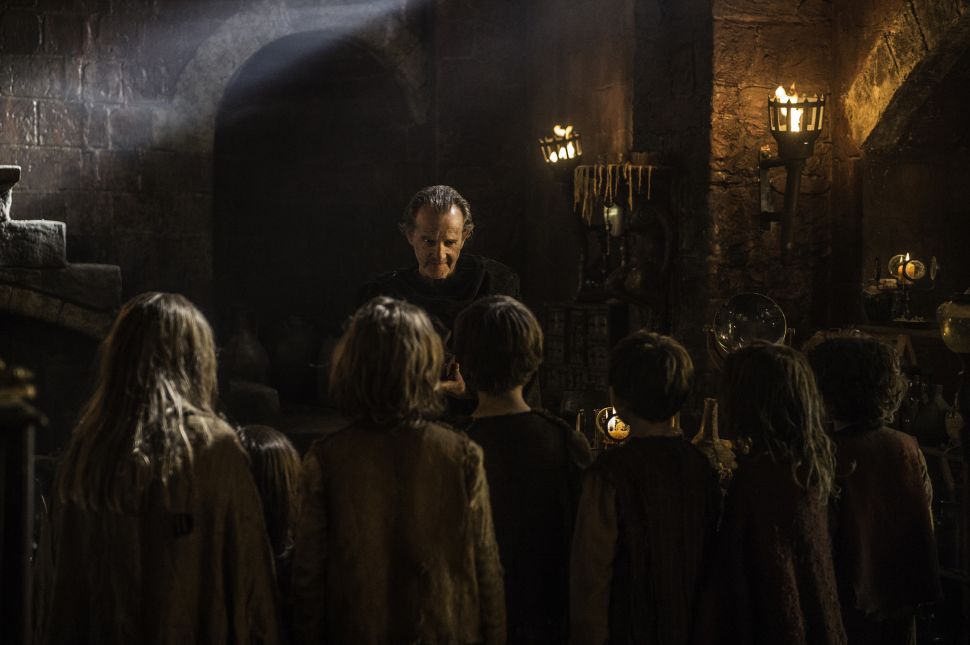