Running for president this year, after her abortive 2008 effort against Barack Obama, has not worked out quite as planned for Hillary Clinton. This was supposed to be her year, at long last. After enduring a quarter-century on the national stage—including tough years by the side of her gifted but scandal-prone husband—2016 finally lined up as Ms. Clinton’s best shot at moving back into the White House, this time with her in the Oval Office.

That outcome is looking less likely by the day. First, Hillary can’t manage to finish off Senator Bernie Sanders, despite his far-left politics that until recently resided quietly on the fringe of the Democratic party. They are fringe no more, and Bernie’s sincerity and authenticity offer an appealing contrast to the often awkward and stilted Ms. Clinton. This summer’s Democratic convention in Philadelphia, where Mr. Sanders will show up with legions of adoring fans who display a passion altogether lacking in the ranks of Team Clinton, promises to be quite a show—maybe even a madhouse.

Then there’s the troubling matter of EmailGate, the long-running scandal that this column has covered in great detail. That Ms. Clinton and her senior staff misused email during her tenure as secretary of state has long been crystal-clear. Refusing to use government email for government work was a violation of policy, while Team Clinton’s routing of said emails through a private server, then putting classified information on it—including above top secret information from the Intelligence Community—looks like a violation of several federal laws.

Early denials from the Clinton camp tried to make the entire matter go away, insisting there was no “there” there. Once that folded in the face of massive evidence that something indeed had gone very awry with Secretary Clinton’s emails at Foggy Bottom, the excuses shifted to ones familiar to those who experienced the 1990s. Everybody does it. It’s not really a big deal. Above all, this is politically motivated. These false accusations are the machinations of a Vast Right Wing Conspiracy.

Such dodges held for months among Hillary fans, aided by parts of the mainstream media which, long accustomed to running interference for the Clintons, continued to do so, attempting to muddy waters that to those familiar with laws and regulations on the handling of classified materials are actually decidedly clear.

That all fell apart yesterday with the release of the long-anticipated State Department Inspector General’s special report on how Foggy Bottom handles email records and cybersecurity. A shoe has dropped for Team Clinton—a very big shoe—and there will be no going back now.

It can charitably be termed scathing, and it leaves no doubt that Team Clinton has lied flagrantly to the public about EmailGate for more than a year.

The Office of the Inspector General at State, as in all federal departments, exists to ferret out internal fraud, waste and illegalities. However, State had no real IG boss from 2009 to 2013, with an acting director heading up the office. Neither Barack Obama nor Hillary Clinton were in any hurry to find a permanent director for State’s IG shop. Now we know why.

The State IG report, weighing in at over 80 pages, is crammed full of bureaucratese yet paints an indelible and detailed portrait of things going very wrong at Foggy Bottom—especially under Hillary Clinton. It can charitably be termed scathing, and it leaves no doubt that Team Clinton has lied flagrantly to the public about EmailGate for more than a year.

That the State Department’s IT systems were a mess for years was hardly a secret, and the IG report makes painfully clear that State has had a difficult time transitioning into the electronic age. Several recent secretaries of state used email in a manner that would be judged inadequate, and perhaps improper, by today’s standards, including Colin Powell and Condoleezza Rice, who served under President George W. Bush.

That said, only Hillary Clinton simply refused to use government email for government work—she repeatedly denied requests from State security and IT to use state.gov email—and she systematically dodged federal regulations on electronic communications and records preservation by setting up her private email server of bathroom infamy. Damningly, while several former secretaries of state cooperated with the IG in this important investigation, Ms. Clinton refused to.

As secretary of state, Ms. Clinton attempted a novel experiment of trying to avoid using any information systems that create records that can be subject to the Freedom of Information Act. The IG report includes painful details, including how she flatly refused to use state.gov email for anything, ever, citing privacy grounds. State IT was concerned because Ms. Clinton’s work emails—all being sent via her clintonmail.com address—were winding up in the spam folders of State officials. Important information was not getting where it needed to go. She needed to use official email for official business. Except she refused.

What was so important, so sensitive that Hillary had to dodge FOIA altogether? Clearly protecting her private life—whatever that might be—was valued more highly by Ms. Clinton than actually heading the Department of State.

Then we have the repeating warnings from State officials about the incredibly vulnerable nature of her ramshackle private email system from any cybersecurity perspective. These, too, were blown off by Ms. Clinton and her staff, despite several hacking efforts that staffers were aware of. Guccifer, the Romanian hacker who illegally accessed Ms. Clinton’s email during her tour at Foggy Bottom, has just pleaded guilty, and there can be little doubt that hackers more adept than he penetrated Hillary’s communications.

The FBI is investigating this case as political corruption—not just for mishandling of classified information.

Any foreign intelligence service worth its salt would have had no trouble accessing Ms. Clinton’s emails, particularly when they were unencrypted, as this column has explained in detail. Yet Hillary was more worried about the American public finding out about what she was up to via FOIA than what foreign spy services and hackers might see in her email.

What she was seeking to hide so ardently remains one of the big unanswered questions in EmailGate. Hints may be found in the recent announcement that Virginia Governor Terry McAuliffe, the former head of the Democratic National Committee and a longtime Clinton intimate, is under FBI investigation for financial misdeeds, specifically dirty money coming from China. In fact, Mr. McAulliffe invited one of his Beijing benefactors over to Ms. Clinton’s house in 2013. Not long after, Chinese investors donated $2 million to the Clinton Foundation.

That an illegal pay-for-play-scheme, with donations to the Clinton Foundation being rewarded by political favors from Hillary Clinton—who when she was secretary of state had an enormous ability to grant favors to foreign bidders—existed at the heart of EmailGate has been widely suspected, and we know the FBI is investigating this case as political corruption, not just for mishandling of classified information. That certainly would be something Ms. Clinton would not have wanted the public to find out about via FOIA.

As is their wont, Hillary’s loyal defenders are denouncing the State IG report as yet another “nothingburger,” adding with customary conspiratorial flair: “there are some real questions about the impartiality of the IG.” In this take, we are supposed to believe that the head of State’s IG office, appointed by President Obama, is a clandestine GOP operative.

Such escapism masquerading as hot takes won’t work anymore. Even The Washington Post, hardly a member of the VRWC, has conceded that EmailGate is a certifiably big deal, and “badly complicates Clinton’s past explanations about the server.” Its editors went further, issuing a blistering statement castigating Ms. Clinton’s “inexcusable, willful disregard of the rules.” They minced no words: “Ms. Clinton had plenty of warnings to use official government communications methods, so as to make sure that her records were properly preserved and to minimize cybersecurity risks. She ignored them.”

Although Post editors were at pains to state that Ms. Clinton had not broken any laws with her gross negligence at Foggy Bottom, the issue remains open. The FBI is investigating that complex matter now. As this column has previously reported, Hillary’s “unclassified” emails included above top secret information about undercover CIA operatives serving overseas as well as extremely sensitive NSA reports about Sudan—all information from special access programs that’s supposed to be tightly guarded.

What sort of impact those compromises will have on the investigation into EmailGate remains to be seen. We won’t know until the FBI submits its findings to the Department of Justice, probably this summer, with a recommendation to prosecute (or not). The key figure in this whole matter is Patrick Kennedy, a longtime Clinton protégé and State’s undersecretary for management (hence his nickname, “M”), who oversaw the department’s IT and security offices. Mr. Kennedy is widely believed to have enabled Hillary’s irregularities—and apparent illegalities—with email and ran internal interference for her when questions became loud and frequent. The FBI will want to unravel this all.

Hints are now emerging that Ms. Clinton’s neglect of basic security may have damaged more than her political reputation. A new report suggests several U.S. counterterrorism operations went awry thanks to Hillary’s slipshod communications security. This serious accusation is unsubstantiated yet plausible, given how easy it would have been for foreign spies to access Ms. Clinton’s email—as well as how much classified information she and her staff routinely put in “unclassified” emails. Counterintelligence officers will be investigating EmailGate for years, searching for clues about clandestine operations that went wrong, possibly due to Hillary’s IT misdeeds at Foggy Bottom.

For now, Team Clinton has plenty of problems to deal with. Their proffered excuses—that everybody does it, it’s no big deal, it’s just a fake scandal ginned up by the VRWC—have been blown apart by the State Department itself. If Hillary wants to be our next president, she needs to come up with better answers to what she was doing with her email—and why.

So far, Bernie Sanders has treated EmailGate with kid gloves, refusing to go after Ms. Clinton with gusto on the issue. Donald Trump will show no such reticence. What the State IG has revealed plays directly into Mr. Trump’s #CrookedHillary narrative. Large swathes of the public have never liked the Clintonian view that rules are for little people—not Bill and Hillary or their friends. Ms. Clinton’s misconduct as our nation’s top diplomat, including compromising our national security in order to hide her private deals, raises serious questions about her fitness as commander-in-chief. We can be sure The Donald will ask them. 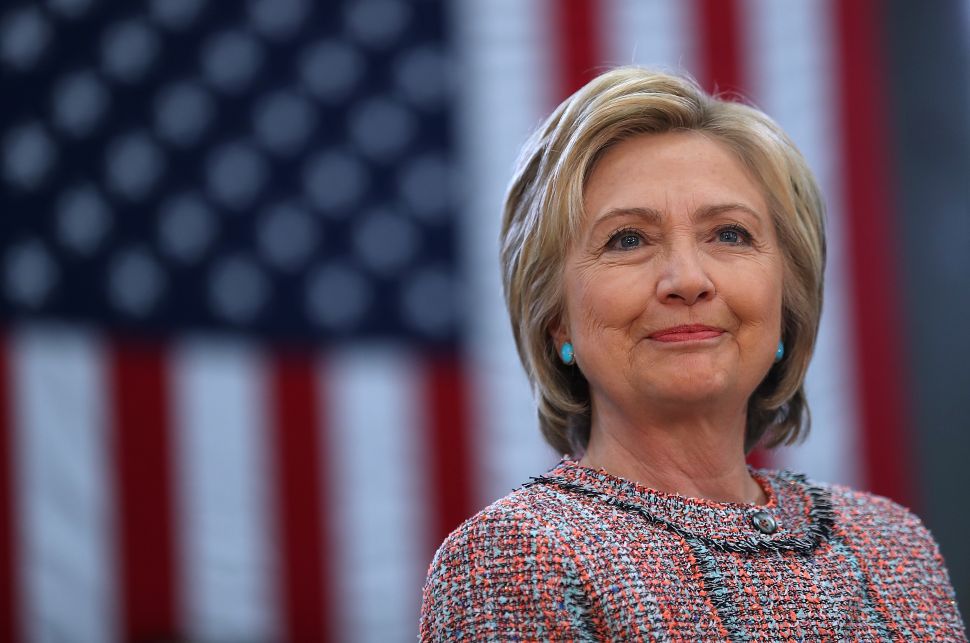