Cape Canaveral, FL—SpaceX has brought back the first-stage of its recovered Falcon 9 rocket to Kennedy Space Center following the vehicle’s successful mission to deliver a Japanese Satellite to orbit and its remarkable sea landing after an arduous trip back to Earth.

Following the precision touchdown, SpaceX’s drone ship was navigated back to the seaport carrying the vertically standing rocket and was docked among the giant cruise liners that frequent the Cape. The Falcon 9 was then loaded horizontally onto a flatbed truck with more wheels to count and began a slow drive from the dock through the entrance of Cape Canaveral Air Force Station. SpaceX personnel and a few members of the media stood just a few feet away from the larger-than-life launch vehicle.

You can immediately see the extreme cosmetic damage caused by its fiery re-entry into Earth’s atmosphere on the rocket’s hull. All 9 of the Merlin liquid oxygen-burning engines that are built in-house at SpaceX seem to have remained attached to the business-end of the rocket but are covered by official company booties. The Falcon 9 will now join a growing family of recovered SpaceX rockets at Kennedy Space Center where initial damage assessments will be performed.

This Falcon 9 is the third of SpaceX’s rockets to successfully return to Earth following a mission but the first to do so from a geostationary transfer orbit—far beyond the International Space Station. This distance requires plenty of fuel and leads to a hotter-than-usual return trip home. Because of this, SpaceX was doubtful it would safely land on the “Of Course I Still Love You” ship parked off the Florida coast.

“The first-stage of the rocket will be subject to extreme velocities and re-entry heating,” said SpaceX in a press release. “Making a successful landing unlikely”

SpaceX personnel working at Cape Canaveral along with the media watched in surprise via a live-stream as the Falcon 9 touched down at sea and SpaceX staffers at the company’s headquarters in Hawthorne, California erupted in celebration.

In a tweet just minutes after the unexpected landing, CEO Elon Musk said SpaceX “May need to increase storage size of hangar.” He’s referring to the company’s brand new hangar at Launch Complex 39A at NASA’S Kennedy Space Center. The historic site has seen the launch of Apollo missions to the Moon and more recently, launches of the Space Shuttle.

Before the Falcon 9 was rolled into the hangar last Saturday, the facility was occupied by the first Falcon 9 to return to Earth by landing on ground at Cape Canaveral and the first Falcon 9 to land on the autonomous drone ship. The first will be shipped to Hawthorne and put on display while the second may be the first candidate for an engine re-firing. After all, SpaceX is bringing home these rockets in hopes of using them again.

As for the hangar’s new 156-foot tall occupant, it seems like it will be staying put for now. “Most recent rocket took maximum damage, due to very high entry velocity,” said Elon Musk in a tweet. “Will be our life leader for ground tests to confirm others are good.”  While the rocket may never fly again, it will help inform future missions and be used to determine whether re-flying these Falcons are actually feasible.

Elon Musk is committed to the idea that reusable rockets are the key to humanity becoming a spacefaring civilization. After a Falcon 9 touched down for the first time on SpaceX’s drone ship following a supply run to the ISS in April, Musk gleefully told the Observer during a surprise press conference that he will unveil his “crazy” plans to build a city on Mars very soon. SpaceX also tweeted a tease of those plans that include the successor to the Falcon 9, the Falcon Heavy, which will make its public debut later this fall. 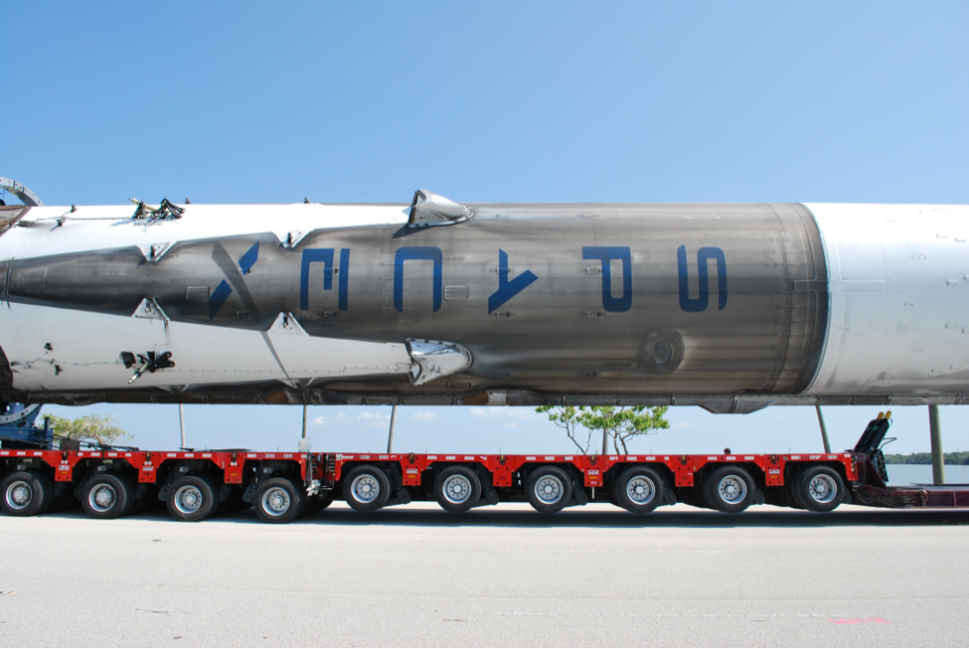