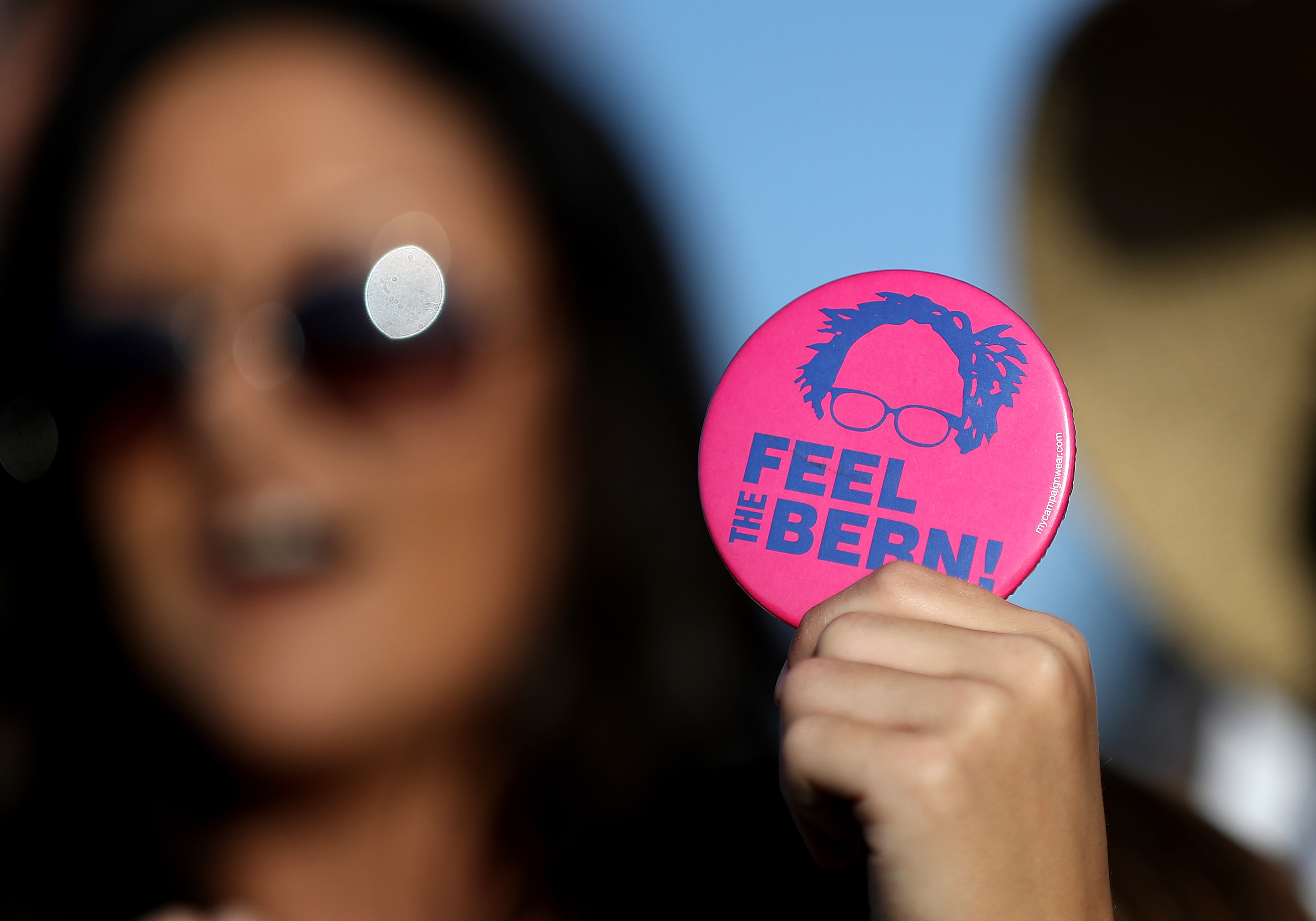 A supporter of democratic presidential candidate Sen. Bernie Sanders holds a campaign button during a campaign rally at Waterfront Park on May 18, 2016 in Vallejo, California. (Photo: Justin Sullivan/Getty Images)

Senator Bernie Sanders does not give the appearance of being a hopelessly stupid man, so one has to believe he understands he is not going to be the Democratic Party’s nominee for president this year.

The numbers make this fact clear to any objective observer. Even to overtake his rival Hillary Clinton just among elected delegates, Mr. Sanders would have to win more than 68 percent of all remaining delegates to be decided in June. With the exception of his home state of Vermont, where Mr. Sanders holds demigod status, he has surpassed 60 percent of the vote in only one other primary state, neighboring New Hampshire, where he earned slightly less than 61 percent.

Yes, Mr. Sanders has won several states by margins exceeding 68 percent, but with the aforementioned exception of Vermont, all of these larger victories have come in low-turnout caucuses, which traditionally tend to be dominated by the party’s left wing. There are only two caucuses left on the Democratic calendar, taking place in the Virgin Islands on June 4 and North Dakota on June 7. Those two contests combine for a total of 35 delegates. In the remaining primary contests taking place between June 5 and June 14, there is no way a competitive contest is going to result in Mr. Sanders picking up 68 percent of the remaining 896 elected delegates. It’s not going to happen. And it must be noted here that none of these calculations take the so-called “superdelegates” into account. Mr. Sanders is hopelessly behind Ms. Clinton in elected delegates, even without considering the superdelegates.

Yet, Mr. Sanders and his campaign continue to hold out false hope to his passionate supporters, many of whom are very young and lacking experience in politics. Few of these inexperienced supporters understand the rarity of what Mr. Sanders would need to accomplish to win. At this level, in a truly competitive nominating contest, for one candidate to run off a string of 70-30 victories in the final weeks of the primaries and caucuses is unheard of, and in the two largest states remaining (California and New Jersey, which combine for 601 delegates), Mr. Sanders is trailing in virtually all polling. Even if he does win one or both of these delegate-rich states (with California being a likelier target than New Jersey), it won’t be by two-to-one margins.

So when one cuts through all the glowing promises and recognizes that Mr. Sanders cannot win the nomination unless Ms. Clinton dies, gets indicted or loses her mind, the only logical question to ask is why Mr. Sanders and his surrogates continue to mislead his supporters about his prospects.

If we accept the premise that Mr. Sanders is not a stupid man, there is only one logical answer to that question: He wants to do as well as he can in the upcoming contests to maximize his leverage over Ms. Clinton and the Democratic Party going forward.

Admitting defeat would dampen his supporters’ enthusiasm. Few people line up to vote for a candidate who has already conceded, as we have seen in the primary results on the Republican side since Ted Cruz and John Kasich suspended their campaigns. In order to enter the Philadelphia convention this July with the maximum number of delegates and the maximum number of votes, Mr. Sanders has to keep pretending he can actually win the nomination.

There are concrete steps Ms. Clinton and the Democratic Party could take to assuage some of the pressing concerns of Sanders backers.

If Mr. Sanders enters the convention armed with something in excess of 12 million votes—and polling showing that perhaps as many as a third of his voters might not support Ms. Clinton in the fall—he will head into Philadelphia with a considerable degree of leverage. Four million votes, considerable numbers of which may be located in strategic states where Mr. Sanders has performed well (such as Michigan, Minnesota and Wisconsin, all key components of the Democrats’ “Blue Wall” in the Electoral College), can make the difference in the November election.

At this point, Ms. Clinton, her team and her supporters cannot be blamed for being irritated with Mr. Sanders, his team and his supporters, who have pummeled her mercilessly and have very likely made her job harder in November. But they must put this irritation aside and recognize that the millions of votes Mr. Sanders has won are crucial to her prospects. It may be unfair that Mr. Sanders, who has won three million fewer votes, holds so many cards, but life and politics are not fair. He does hold these cards, and the Clinton camp must sideline whatever personal feelings they might have and do everything possible to see that those cards end up in her hand this fall.

Hal Ginsberg, the progressive host of The Hal Ginsberg Morning Show on Radio Monterey and a passionate Sanders supporter, suggests there are several things Ms. Clinton should do to convince skeptical Bernie voters to transfer their allegiance to her in the fall. Mr. Ginsberg, who admits Mr. Sanders cannot win the nomination and is reluctantly supporting Ms. Clinton in November, says she must demonstrate a commitment to moving the political ball leftward and not just maintaining the status quo.

Mr. Ginsberg says independent voters perceive both parties as “tools of big government and business elites.” He warns that it would be a mistake for Ms. Clinton to let presumptive Republican nominee Donald Trump outflank her on trade issues, health care coverage and infrastructure issues, which would not endear her to Sanders backers.

“Under these circumstances, the last thing Clinton should do is hew to a cautious, centrist approach,” Mr. Ginsberg said. “Such a course will estrange potential young voters who feel little or no allegiance to the Democratic Party. It will also do nothing to stanch the flow of more conservative independents to Trump, since his populist rhetoric is in tune with their belief that both parties are conspiring against them.”

Mr. Ginsberg suggests Ms. Clinton should advocate broad-based social programs and a massive jobs bill, and that if she couldn’t quite go as far as to echo Mr. Sanders’ call for universal health care coverage, she could at least emphasize her preference for building on Obamacare.

“She made a good start two weeks ago when she called for allowing Americans over the age of 50 or 55 to buy into Medicare,” Mr. Ginsberg said. “Even better would be support for making a public option available to all health care purchasers. She should also highlight her previously enunciated position that the executive branch needs the authority to negotiate lower prices from drug companies.”

Additionally, as Mr. Ginsberg has previously noted on his show, supporting a $15 per hour minimum wage, opposing the Trans-Pacific Partnership (TPP) trade pact, and issuing yet another mea culpa for her 2002 Senate vote authorizing President George W. Bush to invade Iraq could be useful ways to get Sanders supporters to listen.

But there are other concrete steps Ms. Clinton and the Democratic Party could take to assuage some of the pressing concerns of Sanders backers. Perhaps substantial reform of the superdelegate system, one of the biggest complaints of the Sanders crowd, might demonstrate good faith. Allowing Mr. Sanders significant input on the party platform to be considered in Philadelphia would give him the opportunity to graft his and his supporters’ core beliefs onto the party’s stated principles (though it must be noted that the platform is not a binding document and presidential candidates of both parties have typically seen fit to chart their own courses).

And finally, the Clinton camp must be prepared to nominate a vice presidential candidate whose progressive bona fides are untouchable and who Sanders supporters could get behind. Several such potential candidates, unfortunately, are currently Senators in states where their replacements would be chosen by Republican governors, possibly costing the Democrats an opportunity to control that chamber in 2017 if the margin in the Senate is close. This would argue against selecting Sen. Sherrod Brown, whose Republican replacement would hold that seat until the 2018 elections and then have a shot at winning the seat in his/her own right.

However, if Ms. Clinton were to select Sen. Elizabeth Warren, her Republican replacement would only be temporary. By state law, the governor can only appoint a placeholder until a special election can be held, so there would be an opportunity for a Democrat to reclaim that seat in a matter of months. It is hard to imagine who, aside from Mr. Sanders himself, would electrify Bernie backers more than Ms. Warren.

If Ms. Clinton and the Democratic Party were to offer these accommodations to Mr. Sanders and his supporters, perhaps such gestures could go a significant distance toward securing those supporters for the November election. As we saw in 2000, when Ralph Nader took nearly 3 percent of the national vote and deprived Al Gore of a victory over George W. Bush, defections of even a small segment of the progressive base can make a substantial difference in a close election.

Ms. Clinton cannot take the chance that upwards of four million Sanders supporters will sit out the November election, vote for the Green Party, or write in their hero instead of voting Democratic. To the degree that it is feasible, she must be prepared to swallow hard and give Mr. Sanders much of what he wants at the convention in July. 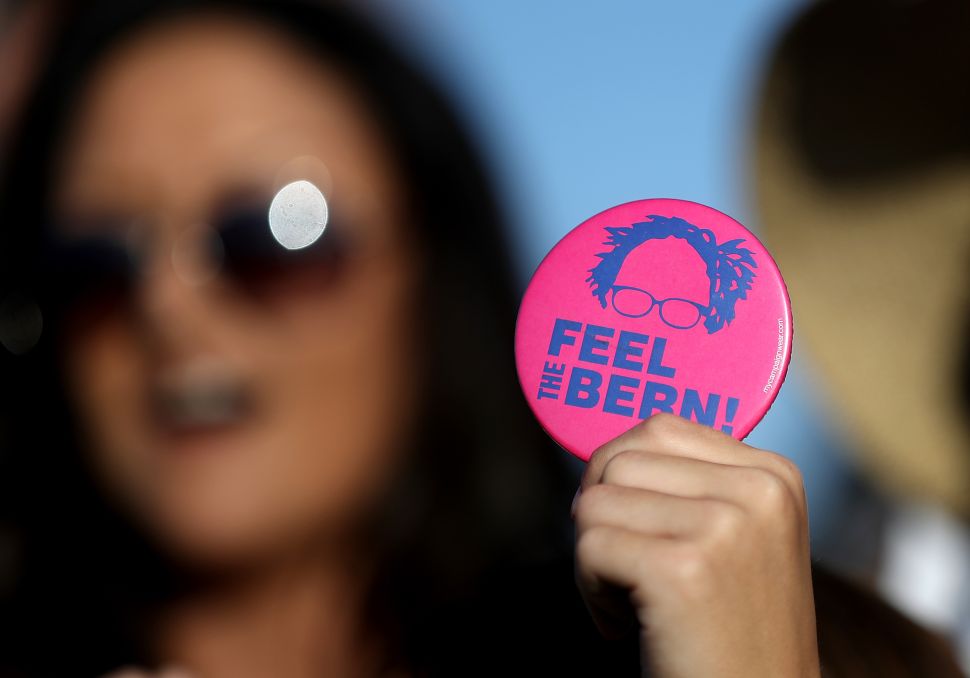