The Nice Guys is another sub-mental movie for morons churned out by the kind of sophomoric Hollywood machine that trademarks the works of Judd Apatow & Co. Afflicted by the same hammered, incomprehensible immaturity that makes modern American comedies unwatchable by any sane person’s standards, this action spoof of the brain-dead, odd-couple cop-buddy franchises popularized by Mel Gibson and Danny Glover, or Eddie Murphy and Judge Reinhold, is equally dumb and forgettable but not even half as amusing. This one, by the jarringly untalented writer-director Shane Black, is merely violent, vulgar and stupid.

In The Nice Guys, set in cheesy looking Los Angeles in 1977 for no apparent reason, Ryan Gosling goes slumming for money as Holland March, an alcoholic private eye and single father with a teenage daughter who teams with a rival dick named Jackson Healy, played by seedy, bloated, miscast and miserable-looking Russell Crowe, who has seen better days in more ways than one. When the film opens, baggy-eyed Healy beats up dimwitted March and breaks his arm. Then, for reasons known only to the scriptwriter’s shrink, they join forces to investigate the murder of a porn star named Misty Mountains and a missing mystery woman named Amelia, who is mistaken for the X-rated corpse. There’s a cynical cameo by Kim Basinger, who looks so bored she can scarcely keep her eyes open, and a tour of the drug dens, punk rock clubs and rotting Hollywood sign that made old cop movies from 40 years ago look so ugly.

The private eyes, who are both on their way to the gutter, play the whole thing as slapstick. But director Shane Black ditches all semblance of plot and character development early, and the two stars demonstrate zero knowledge of comedy timing: Mr. Crowe just growls and barks his way through the movie like a Bowery bum, while Mr. Gosling plays Lou Costello, replete with wheezing and stuttering from old Abbott-Costello routines learned from Turner Classic Movies reruns. A nearsighted woman paints a moustache on a Volkswagen and says, “Boy that Omar Sharif sure runs fast!” This is what passes for humor in Hollywood movies these days? The self-conscious dialogue (co-written by Mr. Black and Anthony Bagarozzi) is about as funny as colon cancer. Example:

“How did you know my name was Buddy?”


Poor Matt Bomer appears as a villain named John Boy with a round birthmark on his face like Richard Thomas on The Waltons. These are the jokes. Every kick in the crotch is magnified to sound like the collapse of a building. These are the special effects.

Shane Black’s credits (wrote Lethal Weapon, directed Iron Man 3) disqualify him from being taken seriously, but hiring him to direct this dog should be anathema to even the greediest moguls in Burbank. But The Nice Guys is depressingly inept by any standards. Every bad movie sets up room for a sequel, but with this idiocy, you’ll pray it isn’t so. 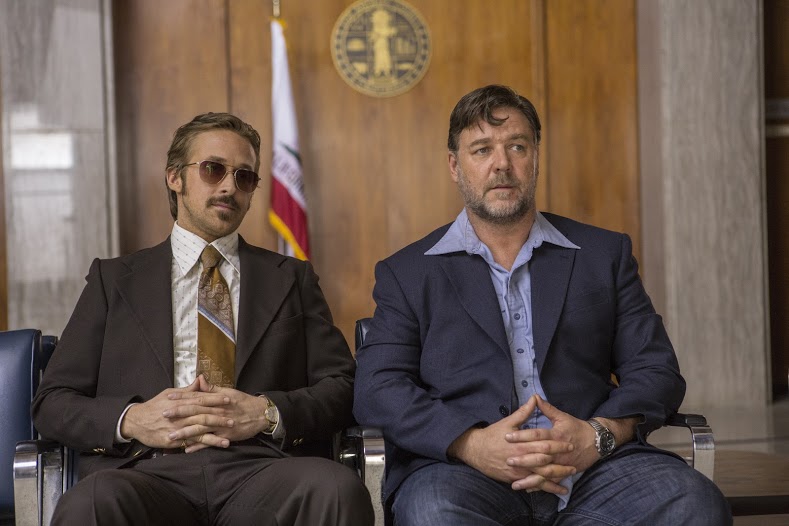