I hope FOX put a deposit down on its Arkham Asylum sets because B.D. Wong and James Frain just chewed the scenery to pieces.

It’s hard to properly articulate to readers the amount of unmitigated joy it brings me to watch Wong’s Hugo Strange and Frain’s Theo “Franken-zrael” Galavan interact without personally mailing you individual letters comprised entirely of hand-drawn exclamation points. The scene where Strange convinces Galavan he’s actually an angel-warrior from medieval times was just so weird, and over-the-top, and dumb and oh my God I want it projected on a loop onto my tombstone which I’ll need within the hour because the way B.D. Wong pronounces words as Hugo Strange literally fucking killed me. IMDB lists Larysa Kondracki as the director for “Azrael.” Based on this scene alone, I assume Ms. Kondracki is actually a sentient director’s megaphone programmed only to scream “DO MORE! DO MORE!” at its actors. That’s a compliment, by the way. High praise for anyone who can get James Frain to play the resurrected Theo Galavan as a terrified newborn baby whose only memory of the world is True Detective season 2.

Compare this with Jim Gordon confronting Strange in his office, coming at this genius-scientist like “I too can read faces for example you just blinked, liar,” which is proof positive that you can’t build a scene as a battle of wits if one of the characters involved has the detective skills of a literal leather shoe.

At this point, I enjoy Gotham on such a backwards, unexplainable level I actually love the stuff it continually does wrong more than what it does right. For example: Galavan-as-Azrael, a psychotic madman cosplaying as Casey Jones from Ninja Turtles, wants Jim Gordon dead. So where do we stick Jim Gordon? Why, the impenetrable super-fortress that is the GCPD Station, of course. Has that plan ever worked? Not even just on Gotham. Has that plan ever worked in the entire fictional history of Gotham City? The Electrocutioner broke into the station by playing with the light switches. The Maniax broke into the station by putting on Party City police costumes. Victor Zsasz broke into the station by asking politely and not even kidding his plan was the most effective. I firmly believe a dachshund puppy with an unloaded gun and the right amount of determination could break into the GCPD.

So yeah, Captain Barnes’ has all this information stored in his Thanksgiving parade balloon of a noggin’, and is still like “SEND OUT THE TASK FORCE. ME AND FOUR DEPARTMENT STORE MANNEQUINS WILL GUARD JIM GORDON.” And what’s funny–like, really, really funny–is that Gotham establishes, multiple times, that the sword Galavan uses is a cheaply made fake and yet he still slaughters three GCPD officers and gets Gordon and Barnes alone on the roof. It’s fine, though, because nothing of consequence happens up there. Barnes gets stabbed–and survives. Theo gets thrown off the roof–and survives. Jim is an uncaring asshole who still hasn’t called his fiance, who recently suffered a tragic miscarriage, to tell her he’s out of prison–but he survives.

Really, the biggest takeaway of “Azrael” story-wise is the whole world–including, Oswald, Bruce, Alfred, Butch, and Tabitha–knows Galavan is still alive. “No one dies and comes back to life, do they? No one,” Alfred says. Unfortunately, the camera cut away before Bruce was like “Haha tell that to Jon Snow” and Alfred open-hand slapped him across the face because billionaire future-superhero or not, a spoiler is a damn spoiler.

As always, let’s run down every reference, fact, and nugget of Bat-history brought up in the season 2, episode 19, “Azrael.”

THE BIRTH OF BATMAN

THE SWORD OF SIN

The Sword of Sin, preferred weapon of Azraels everywhere, in the comic books is a little different from Gotham‘s Sword of Sin, mainly because Hugo Strange didn’t buy it at Target for $6. And thank goodness for that, because comic book Sword of Sin has the power to fill its victims’ minds with every sin they’ve ever committed. The last thing Gotham needs is a montage of every time a teenage Jim Gordon jerked off to Columbo.

Because he successfully convinced Theo Galavan he was an Azrael simply by reading him a bedtime story, Hugo Strange’s newest plan for Indian Hill is to implant the memories, histories, and backstories from famous books into the minds’ of his monsters. As an example, he giddily recites from Lewis Carroll’s Alice’s Adventures in Wonderland:

“But I don’t want to go among mad people,” Alice remarked.

Which is convenient, because if you mainline the story of Alice in Wonderland into the head of a psychopath, dude might come out the other side looking a lot like this:

That’s Jervis Tetch, AKA The Mad Hatter, Batman’s resident Wonderland-themed villain: mind-control tophats, poisoned tea, magic mushrooms. The works. The Hatter first appeared in 1948, and since then he’s served as everything from whimsical rapscallion to pretty thinly-veiled pedophile.

It’s worth mentioning Strange is also carrying Through the Looking-Glass and What Alice FoundThere–Carroll’s sequel to Alice’s Adventures–which contains the first appearance of chrome-domed identical twins Tweedledum and Tweedledee. Batman’s Jervis Tetch, because he’s a stickler for realism but also very insane, rolls with two henchmen by the same name. The question now becomes how we get Kristian Nairn to play them both at the same time. 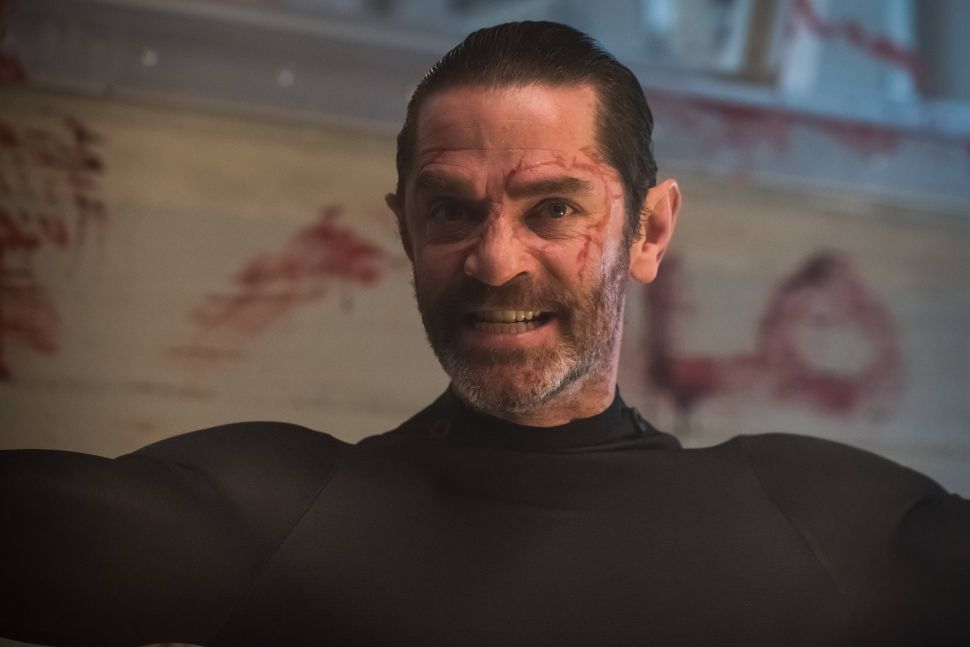