As a humanitarian tragedy, the ongoing slowdown of Manhattan’s ultra-luxury housing market doesn’t really rate. “Think of the poor billionaires!” said no one ever. But even if the prospect of a minor Saudi potentate taking a haircut on a $70 million penthouse leaves you unmoved, at least spare a brief, sympathetic thought for the poor rich man’s real estate agent.

No one wants to be the bearer of bad news, but for brokers it’s sometimes part of the job description. Right now is one of those times, as real estate pros laboring in the fields of New York’s highest end find themselves, in many cases, contending with a combo of falling prices and unrealistic expectations.

The ultra-luxury condo market has been the great real estate story of the last several years with buildings like Extell Development’s One57 setting new price records and talk of $100 million listings coming to seem almost routine. More recently, though, oversupply combined with shrinking demand from the all-important international buyer set has led to a downturn in this segment. And that, in turn, has led to an uptick in uncomfortable broker-seller conversations.

“North of $4.5 or $5 million is very slow, whether you are talking about the resale market or new development,” Jonathan Miller, president and CEO of appraisal firm Miller Samuel, told the Observer.

On the new development side, he said, the sluggish sales are due primarily to the large amount super high-end product that has come to market or is slated to come to market in the relatively near future.

With regard to resales, sellers themselves are often the issue, Mr. Miller said.

“You have a big problem with what I call aspirational pricing,” he said, “where they are just setting list prices that have no connection with reality.”

“Really, the [price] adjustments needed to start about 200 days ago,” Compass broker James Cox said. “We knew that, but the sellers at that time were still all uniformly assured in their own heads that they had the greatest apartment ever, and that the market was so strong that there was no issue.”

Mr. Cox and his fellow Cassandras in the broker business “tried really hard to educate sellers at the time,” he said, but, alas, how do you convince the owner of a $50 million duplex that, perhaps, in fact, their apartment really isn’t all that?

‘Really, the [price] adjustments needed to start about 200 days ago,’ Compass broker James Cox said. ‘We knew that, but the sellers at that time were still all uniformly assured in their own heads that they had the greatest apartment ever, and that the market was so strong that there was no issue.’

“Basically a lot of developers caught wind of the fact that there was a big appetite for luxury product, and there were very successful buildings like Walker Tower and 56 Leonard and 150 Charles downtown and then up on 57th Street,” he said. “And a lot of it came to fruition all at the same time, which has led to a bit of a frothy market.

“Over the last 24 months we’ve seen record-setting prices citywide,” he added. “So it’s natural and understandable that some people would like to try to achieve numbers that are not attainable.”

The thing about unattainable numbers, though, is that they’re unattainable. Which means that without a little flexibility, that apartment is never going to sell.

Starting out a little high is fine, but sellers need to be quick about adjusting their price downward if needed, said Serjik Markarian, a broker with FirstService Realty NYC.

“After the first two weeks when the apartment comes on the market, you know where you stand,” he said. “The market talks, it tells you if you have a good price or a bad price. So if you really insist on pricing it $100,000 more than what I am suggesting, then, O.K., we’ll give it a try for two weeks. But you need to agree that within two weeks if you don’t get any serious buyers coming forward, then we need to go back to what I suggested in the beginning. Because if you don’t do that, you’re going to sit on the apartment for two or three months and still constantly have to reduce the price.”

Plus, sit too long on the market and an apartment can acquire a certain, shall we say, reputation.

“Buyers think there is something wrong with it,” Mr. Markarian said. “And they become less serious about approaching that apartment.”

“Buyers who have been in the market a long time watching the prices go down will lose interest in that property,” Engel & Völkers broker Noel Berk said. “When a property is priced too high, people just say, ‘They’re out of their mind. I’m not even going to make an offer.’ Most people will not make a lowball offer.”

And in a market that’s trending downward, every day a unit goes unsold can mean a lower ultimate price. One of Mr. Cox’s recent clients discovered this the hard way, leaving some $150,000 on the table by not cutting his initial price quickly enough.

“In neighborhoods that are very hot, Bed-Stuy, for example, sellers are reaching for that sale that will set the new price-per-square-foot record, and a lot of times it’s not realistic,” she said. “If the market was starting to pop last year and someone got $1.1 million for their townhouse, now someone wants $1.6 million.”

“We had good traffic, but nobody was offering because [the apartment] was overpriced,” Mr. Cox said. “I’m 100 percent sure we could have gotten him $2.45 million on this particular apartment, but we went into contract at $2.3 million. And at the end of the day, [the] seller is super mad at himself because we are in contract now for $150,000 less than I told him we would sell it for, and it’s purely because he didn’t listen because he as a seller [thought he] knew more than I knew as a broker.”

Better that the seller be mad at himself than his broker, but, Mr. Cox said, such relationships almost always turn prickly.

“You know you are going to have relationship issues down the road, because the seller is not going to get what they wanted, they will forget the conversation we had in the first place, and you have to very gingerly remind people what they said in the first place because nobody likes to be told that they were wrong,” he said.

So does he ever decide just to pass on a deal?

“In our heads we sometimes think like that would be the cool thing to do,” he admitted. “But I have a kid I have to feed, so I take every listing and figure we’ll find some way to get it done.”

“Most people [today] are agreeing with our valuations, but those people who do not agree, I would prefer not to take their listing and only work with people who are motivated,” she said.

Part of the problem, she suggested, is that the recent ultra-luxury boom convinced sellers in less prestigious buildings that they too could get top dollar for their apartments.

“A super, super prime building might be asking, say, $70 million for an apartment,” she said. “And now those sellers in secondary buildings think their apartments are also worth $70 million.

“There is one apartment I know of, the owner put it on sale for $100 million, and [it is] in a building that is 20 years old, postwar, not very attractive, and you are just not going to get those kind of prices,” she said.

While this sort of seller disconnect is most acute at the higher end of the market, it’s an issue with more modest properties, too—especially in the case of emerging neighborhoods that have recently seen big run-ups in price, said Douglas Elliman broker Doreen Fuentes.

“In neighborhoods that are very hot, Bed-Stuy, for example, sellers are reaching for that sale that will set the new price-per-square-foot record, and a lot of times it’s not realistic,” she said. “If the market was starting to pop last year and someone got $1.1 million for their townhouse, now someone wants $1.6 million.”

In such cases, Ms. Fuentes said, she tries to set sellers straight by showing them other likewise ambitiously priced properties that have sat on the market for several weeks without a bite.

“If a [Bed-Stuy] townhouse hits the market and is priced right it will have offers at its first open house,” she said. “If you are not seeing that then you have to readjust.”

“My sellers are smart and plugged in and, to be honest, I’m not really wrestling anyone [about pricing] right now,” he said. “For instance, I have a townhouse listing on 55th Street between Park and Madison, and we have adjusted pricing over the past few months. But it’s just about having patience, keeping everyone informed and acknowledging that there is a slowdown. You can’t pretend like it hasn’t happened.”

Then again, maybe you can. Citi Habitats broker Victoria Rong Kennedy said that some of her clients are still taking a “wait and see” approach. “They want to see how bad it can get before they really drop their price,” she said.

It seems likely that the current ultra-luxury slowdown will only grow worse as new inventory from buildings like 111 West 57th and 220 Central Park South comes online. But Ms. Kennedy said that some of her sellers are holding out hope that developers will readjust their sales strategies so as to limit the amount of new super high-end units hitting the market in the near term.

Mr. Cox said he sees a roughly 50-50 split between sellers with realistic assessments of the current situation and those who still cling to dreams of ever accelerating valuations.

“Half the customers we are talking to are listening to us because we are giving them these real-life scenarios of what we are going through right now and what happened to the people who didn’t listen to their professional,” he said. “And then we still have some other people who are still sure that they can beat the trend and that their apartment is somehow outside the scope of reality and that they will get what they want.”

And sometimes, on certain rare occasions, they actually do.

“We have that exact situation going on right with a listing in Williamsburg on the L train,” Mr. Cox said. “I was just sure there was no way we were going to sell this thing for the price [the client wanted].” Yet, they did. 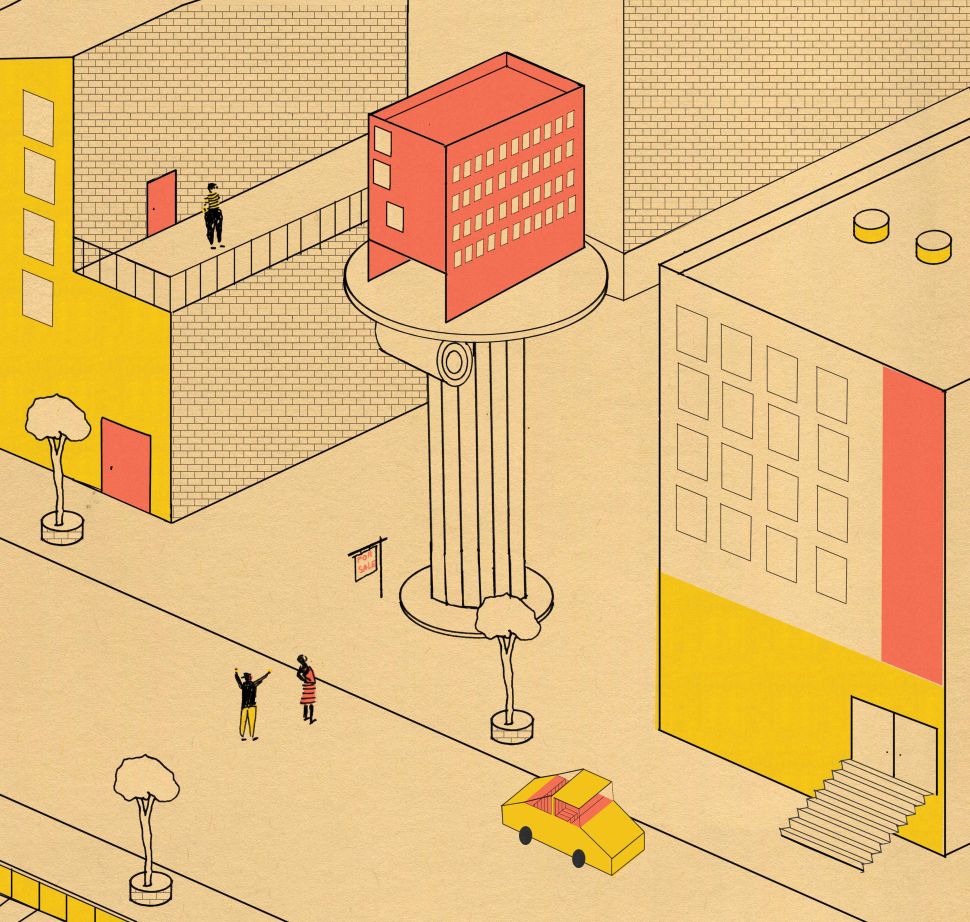