In December 2014, Stephen Colbert hosted his very last episode of The Colbert Report on Comedy Central to assume a less politicized role as David Letterman’s successor on The Late Show. A few months later, Jon Stewart retired from The Daily Show, which aired its final episode in August 2015. The departure of two such progressive icons prior to this year’s historic presidential primary—for both the Republican and Democratic parties—begs introspection as to how the election would have been influenced if Mr. Colbert and Mr. Stewart remained in their roles at Comedy Central.

Before the 2016 elections began and The Daily Show was winding down, Mr. Stewart did call out Hillary Clinton’s failure to claim $10 million in donations to the Clinton Foundation. Years before, during the 2008 Democratic primaries, Mr. Stewart was one of the best in media at highlighting Ms. Clinton’s fallacies as a candidate. In one segment which aired on April 24, 2008, Mr. Stewart poked fun at Ms. Clinton’s criticisms of caucuses, the Democratic primary process, defense of super delegates and downplaying of the states she lost to Barack Obama.

In another segment, Mr. Stewart criticized an MSNBC reporter who distorted an image of Mr. Obama scratching his face, to infer he flipped Ms. Clinton the bird. Mr. Obama appeared twice on the show during the primaries—in August 2007 and April 2008—and, prior to Mr. Stewart’s last episode, the LA Times described the “love story” between Mr. Stewart and Mr. Obama.

Mr. Stewart made no formal endorsement—his coverage maintained impartiality—but his rhetoric and ability to criticize each candidate as well as the mainstream media offered an unprecedented platform that hasn’t been matched in the new version of The Daily Show hosted by Trevor Noah. Mr. Stewart recently broke his silence on the 2016 primaries in an interview with David Axelrod, saying ”what I think of Hillary Clinton is, I imagine her to be a very bright woman without the courage of her convictions—because I’m not even sure what they are.”

In 2008, Mr. Colbert often tore Ms. Clinton apart in ways no left-leaning comedian or pundit has done in the 2016 primaries. Following a debate in Philadelphia, Mr. Colbert outed moderator George Stephanopoulos’ bias for Ms. Clinton. Ms. Clinton is partially to thank for Mr. Stephanopoulos’ career success, posing an obvious conflict of interest which should have barred him from being a moderator at the debate. In another segment, Mr. Colbert criticized Ms. Clinton for citing Frederick Douglas as a role model, and ripped into Bill Clinton over the former president’s constant criticisms of the Obama campaign.

Mr. Colbert made one of the most astute criticisms of the 2010 Citizens United ruling by trying to establish his own super PAC. Campaign finance has been a polarizing issue in the 2016 Democratic primaries, and the ethical and corruption issues with regards to how elections are funded in American politics have received poor coverage in the mainstream media. One can only speculate as to how The Colbert Report would have covered Bernie Sanders’ campaign and the issue of campaign finance in this election cycle—but it is safe to say no other mainstream media host took the issue on with the veracity Mr. Colbert did.

Ms. Clinton’s pandering, questionable campaign finance violations and strong ties to wealthy donors across every big interest in the country have been poorly covered by mainstream media in the 2016 election. Instead, the media has spent most of their time obsessing over Donald Trump while blacking out Mr. Sanders’ campaign.

Stephen Colbert and Jon Stewart served on a popular, widely-accessible platform from which they could criticize the inauthenticity of the media and political candidates—both Democrats and Republicans. They served as a conduit between Clinton and Obama supporters in the 2008 election, offering important criticism and analysis beyond what was being offered in the mainstream.

It’s impossible to quantify what their influence would have been on the race between Bernie Sanders and Hillary Clinton, but their coverage has surely been missed in an election where the media has done a terrible job—giving Bernie Sanders’ campaign little-to-no coverage while he makes history by breaking campaign contribution records and campaign rally attendances. 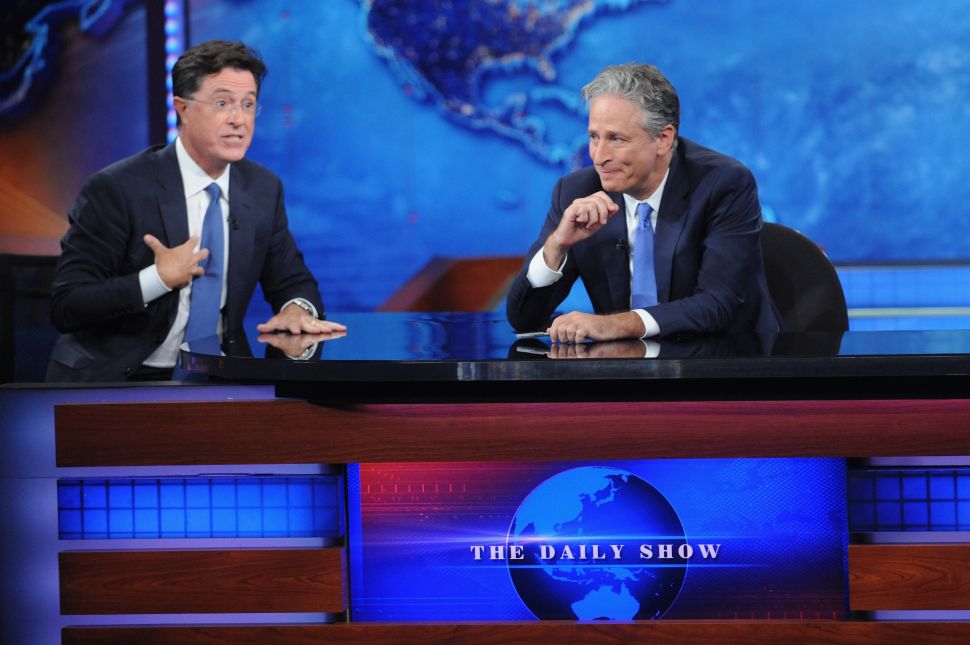