During a campaign stop in Kentucky on May 2, Hillary Clinton told a group of supporters she plans to pull Bill Clinton out of retirement to help bring jobs back. “I’ve told my husband he’s got to come out of retirement and be in charge of this, because he’s got more ideas a minute than anybody I know,” she announced to the small crowd.

America can’t afford more of Mr. Clinton’s terrible ideas on job creation or trade policy. His administration’s push for NAFTA was a disaster, sending an estimated 700,000 jobs overseas and allowing large corporations to force workers to accept lower wages or have their jobs outsourced. The trade agreement is still held in disdain by many national labor unions, who have also been some of the most vocal opponents of the Trans-Pacific Partnership, which would further scale back workers’ rights in the United States. Ms. Clinton flip-flopped on the TPP, initially helping negotiations progress while serving as Secretary of State only to vocally oppose it during her presidential campaign with vital labor union endorsements on the line.

“The media claimed that unemployment rates for African Americans had fallen to record lows, neglecting to mention that this miracle was possible only because incarceration rates were now at record highs,” wrote Michelle Alexander, author of The New Jim Crow, in a February 2016 article for The Nation. “Young black men weren’t looking for work at high rates during the Clinton era because they were now behind bars—out of sight, out of mind, and no longer counted in poverty and unemployment statistics.”

Another inadvertent assist to Mr. Clinton’s economic policies was the emergence of the Internet during his administration and the end of the Cold War, opening up new foreign markets to the United States.

“I think the model is something like Clinton, who—in fact—mostly was just riding on a successful economy, that was successful mostly for reasons that had nothing much to do with him,” said New York Times columnist and Nobel Prize winning economist Paul Krugman in a 2011 interview on ABC’s This Week. Mr. Krugman has notoriously praised Ms. Clinton and criticized Bernie Sanders throughout the Democratic Primaries.

Further illuminating Mr. Clinton’s shortcomings on economic and trade policies is the decision from his former Secretary of Labor, Robert Reich, to endorse Mr. Sanders over Ms. Clinton.

“Her proposals contain some good ideas but they don’t go nearly far enough,” Mr. Reich told the Observer in an interview this past March, citing two economic reforms Ms. Clinton is unwilling to engage: breaking up big banks and resurrecting Glass-Steagall, which Senator Elizabeth Warren and Senator John McCain introduced a bill to do in 2015. Glass-Steagall, along with several other important financial regulations, were rescinded during the Clinton administration. This deregulation catalyzed the contributing factors to the 2008 economic recession.

Mr. Clinton was elected president in 1992 with only 43 percent of the popular vote—the rest being split between Republican candidate George H. W. Bush and Ross Perot. He left office in a disgrace after being impeached in 1998 by the House, and acquitted by the Senate after the impeachment failed to receive the necessary two-thirds vote. The infamous Monica Lewinsky scandal was an embarrassment for Democrats and contributed to vice president Al Gore’s marginal presidential campaign loss in 2000. Neither Democrats nor the country can afford to have Mr. Clinton anywhere near the White House again—yet the party has conveniently-induced amnesia, distorting nostalgia for the 1990s into a proud Clinton legacy.

The repeatedly negative publicity Mr. Clinton has provided his wife’s campaign provides a glimpse into the types of scandals and controversies his involvement in the White House will elicit. He was booed recently at a campaign rally in West Virginia, after an entire town told the Clintons they were not welcome. His reaction to protesters at rallies has been abrasive and unbecoming of a public servant. A visit to a polling station in Boston, Massachusetts during voting hours incited allegations of breaking election laws. 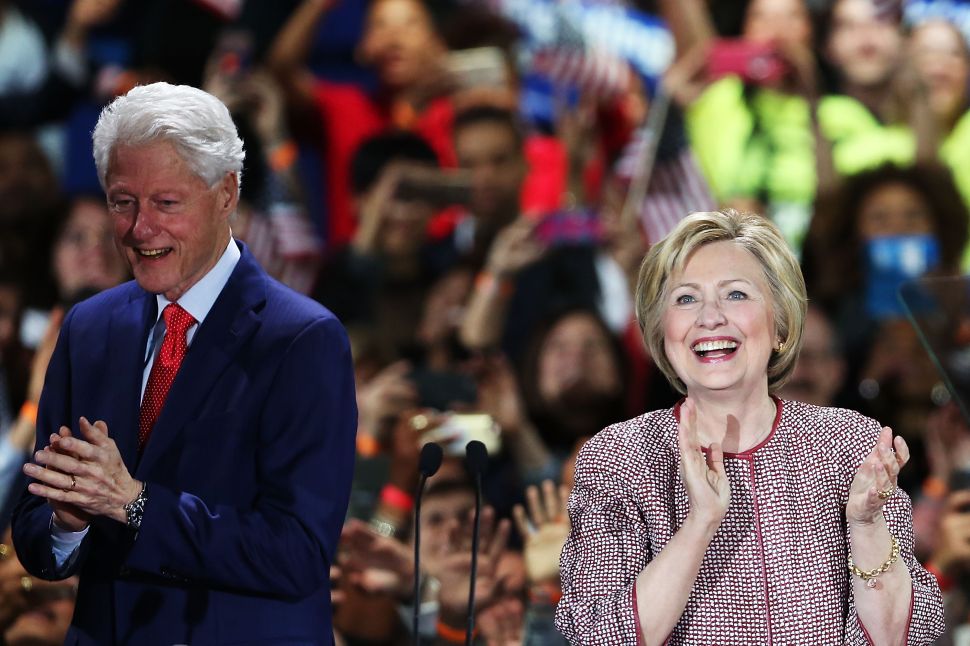