This piece originally appeared on Quora: How do you know if you’ve discovered your passion?

Too many of us believe in a magical being called ‘passion’. “If only I could find my passion”, we cry. “Finding my passion would make me happy”.

Well, passion is real, and very powerful. But almost everything people believe about finding it is wrong.

Imagine you start a dance class. You find it easy. You realize you’re getting better than others, and fast. That rising excitement you feel is your passion, and that passion makes you come back for more, improving your skills, and compounding your strengths.

The enemy of passion is frustration. If you constantly struggle with something, you’ll never become passionate about it. You learn to avoid it entirely, guaranteeing you never improve.

Most people get this backwards. They think we discover our passion, and that makes us good at something. It’s actually finding that you’re good which comes first. Passion comes from success.

Rule 2: Childhood is where passion goes to die

In theory childhood provides a great opportunity to try a bit of everything, find your talents, and with them, your passions.

But think for a moment how badly the system is stacked against you. Say school lets you try 20 subjects, ranking you against thousands of other children. Those aren’t good odds. Most kids are, by definition, around average. And it doesn’t matter how much we improve education, because people need to feel exceptional to feel passionate, and improving education simply moves up the average.

Say you’re one of the lucky ones, and you’re top of your junior math class. The education system will keep rising your difficulty until you find a level – like college – where you’re not exceptional anymore. Even if you actually are objectively pretty great, once you feel merely average, you’ll find your passion slipping.

And that’s if you’re lucky. What if your passion was for art? From an early age that passion is compromised by its social consequences. “It’s hard to make a living from painting” say your parents. “Your cousin is doing so well from engineering. Why can’t you be more like him?” And so you put your passions to one side, and let them wither.

In a population of billions, it’s obvious that not everyone can be unusually great at a handful of academic subjects. What if your true skills are in speechwriting, or creative dance, or making YouTube commentaries of videogames? None of those things are even on the syllabus.

And so most people grow up without much passion for anything.

Rule 3: Passion can be created

It may help to know that the most successful people in life generally didn’t pick their passion off a shelf.

They created their own passions.

Only a tiny fraction of people can expect to excel in the narrow subjects that childhood primes us for. And competition in that space is basically ‘everybody in the world who went to school’, which doesn’t help our chances.

But if you look outside of that space, you’ll find less competition, and more options. And this is how you tip the odds of finding a passion in your favor.

When you create something new, you’re inventing something to be passionate about.

New things are relatively uncontested. By creating something new, you’ve made your odds of becoming exceptional far, far higher.

Now it’s important to note that this doesn’t sidestep Rule #1: passion comes from success. So if your new Twitter account only has 5 followers after a year, you probably won’t be too passionate about it. If you had 5 million, you’d have quit your job. You must find success to fuel your passion.

But at least you’ve drastically improved your odds, because your competition is so limited. Only a handful of people will even dare to try something new. And you can be one of them, just by starting.

You see this pattern throughout history’s greats. A student called Mark was never going to be the world’s greatest programmer. But he started building cool websites, and he found he was unusually good at this because even better programmers rarely dared to try. It just so happens one of his little experiments became Facebook.

But there’s always a new frontier being born, a place where everyone else is hopelessly incapable, and even modest skills can be impressive.

Say you were a teenager who started making YouTube videos, back in 2005. You grow a modest following, and your growing success excites you. By the time the ‘grown up’ world had realised YouTube was Kind-Of-A-Big-Deal with 4 billion views every single day, you’ve become a passionate master of an invaluable new craft.

That isn’t fantasy. There are mountains of hugely successful YouTubers, and most started in the same way: before everybody else. It’s the same for the first bloggers, rappers, and videogame designers.

If you can find something new that’s growing fast, and get skilled at it early, you’ll find it disproportionately easy to excel because of the lack of competition. And that’s your new passion right there.

One limitation of education is it’s designed to narrow your skills. Education generally finds your One Best Thing, and pushes that thing as far as you can stand it:

The problem is most of us, by definition, can’t be the best in any one area. But we can be exceptional in our combinations.

Say you’re an average artist, with a decent sense of humour. You won’t have much hope with an art degree, and you can’t study ‘humour’ as a subject. But you could be an awesome cartoonist.

Or take an average business student, with some programming ability, and decent sales skills. That person is surprisingly well suited to become the boss of others who were better than them in any one of those areas.

The most successful people are almost never defined by a single skill. They are a fusion of skills, often not even exceptional skills, but they’ve made their fusion exceptional. Steve Jobs was not the world’s greatest engineer, salesperson, designer or businessman. But he was uniquely good enough at all of these things, and wove them together into something far greater.

This is the final route you have to finding your passion: combine skills into something more valuable. Remember, passion comes from success. If a new combination gets you better results, that could be your passion right there.

Passion is attractive. As passion comes from believing you’re unusually good at something, being passionate is a very sincere way of saying, “by the way, I’m awesome”.

And like love, what we’re passionate about is too important to leave to the mercy of fate. If you haven’t found your passion yet, create new things, lead new trends, and fuse new combinations. But don’t ever stop looking. 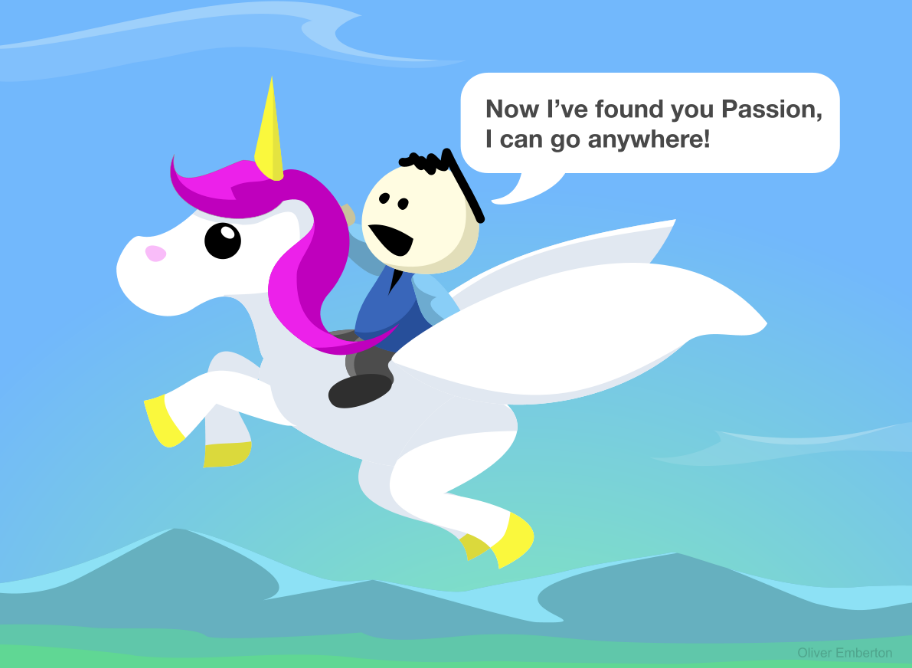