There were no Birkin bags spotted at the opening session of Hermès’ “Here Elsewhere” exhibit on Tuesday evening, although a singular spotting of the brand’s Kelly purse can be confirmed. Still, the essence of luxury lingered in the air. Actually, it was suspended from ceiling on fishing wire, in the form of leather-wrapped desks and a cushy update on the director’s chair, dangling above reveler’s champagne flutes in the Cedar Lake event space.

“Here Elsewhere” had a definitive focus on furniture and objets­, some of which were fixed to the floor. But thanks to the involvement of avant-garde director Robert Wilson, there was an overall focus on performance art. The fabled creator lurked somewhere behind the scenes, growling words such as “horse,” “stitch” and “chaos” into a microphone.

Providing a live soundtrack wasn’t Mr. Wilson’s singular involvement in the invitation-only event: The septuagenarian also shepherded performance artists who were perched at Hermès vanities, slowly opening drawers or staring into a mirror that revealed a sparkling necklace. Likewise, Mr. Wilson directed the elderly woman in a white dress who lay haphazardly at the foot of a leather and linen couch, while grasping for a crystal on the floor in front of her.

“All of my work as an artist starts with drawings, pencil and paper,” Mr. Wilson told the Observer following the event. “I felt an affinity with Hermès, seeing [their] work still today being manufactured by hand. I felt an identification with their attention to detail.”

That feeling was mutual, according to the artistic directors of the Hermès maison collection, Charlotte Macaux Perelman and Alexis Fabry.

“In France he is very well known,” Mr. Fabry said.

Ms. Macaux Perelman continued, “I’ve known of him for many years. I’ve seen his shows. I’m a great fan.” She noted that his adoration of crafts and objects, plus his mastery of the theater realm, made him a perfect match for this exclusive-to-New York event.

Mr. Wilson even provided a new perspective to the collection that the creative duo designed. “This is more about the relationship with your body and the pieces. It was important for us to get out of the way of just the function of the furniture,” Ms. Macaux Perelman explained.

Away from all the furniture, through a darkened hallway in the Chelsea event space, guests were ushered into the vortex of a visual carousel created by Mr. Wilson, inspired by an actual vintage Hermès one he came across in the brand’s archive. The modern iteration featured images of horses, bien sûr, but also wallpaper patterns from the maison collection and pictures of handcrafted leather lawn chairs revolving around a screen that circled the room. In the middle, a dancer, enrobed in a sparkling leotard, performed a ballet of angular proportions. As a final sensory experience, the space was heavily scented with the pricey cologne the brand is also known for.

As the last stop before emerging back into the pedestrian world, guests were ushered into a square room, wallpapered pink with white polka dots. Bubbles floated through the air. Leave it to Mr. Wilson to introduce a sense of childlike abandon to the brand that sells furniture with a six-figure price tag. 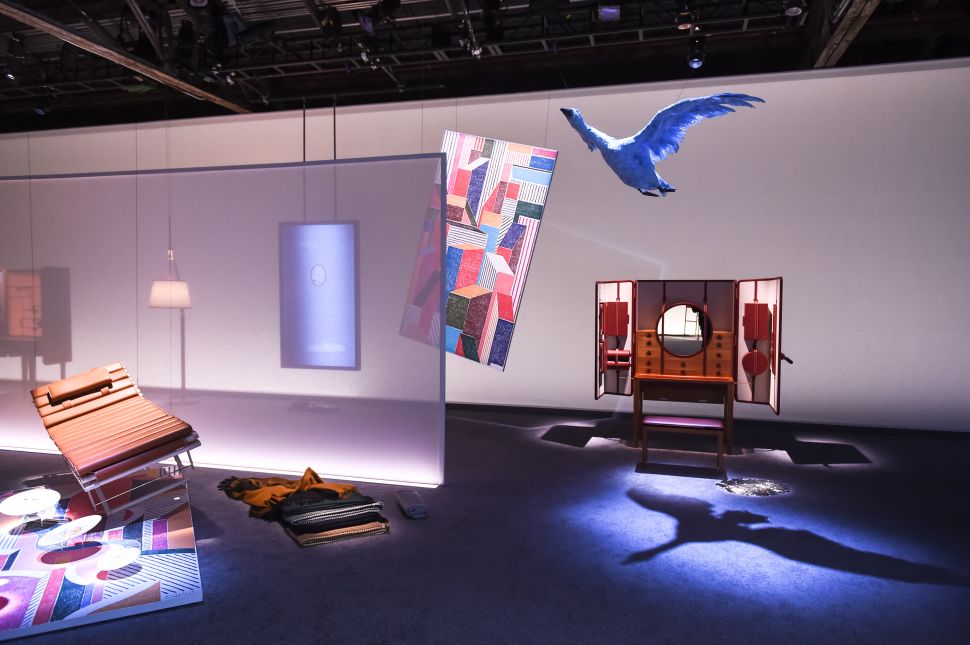