(This post contains spoilers for all things Game of Thrones, so if you’re not caught up just hold the door a little bit longer…)

If you caught last night’s Game of Thrones, titled “The Door,” two things are true: 1) You’re struggling to read this as you openly weep into a pillow embroidered with the face of Kristian Nairn and 2) You learned the real meaning of gentle-giant Hodor’s name is an abbreviated “Hold the door,” a phrase Bran Stark time-travel-seizured into a young Hodor’s head through Warg-magic.

It’s a twist practically no one saw coming. No one, that is, but Michael A. Ventrella, who wrote in a blog post dated April 20, 2014, about a run-in at a con with A Song of Ice and Fire author George R.R. Martin:

Me:  I finally figured out why you have a character named “Hodor.”

Me:  I was thinking about your comment about wanting to be an elevator operator. It’s clear to me now that “Hodor” is short for “Hold the door.”

Martin:  (laughing)  You don’t know how close to the truth you are!

Now, yeah, we could chalk this up to a funny little story and a great guess, and move on with our day. Or, OR, we could take note how frighteningly close this encounter mirrors not only the events of last night’s episode, but Hodor’s origin story in itself. I’m on to you, Mr. Ventrella, like the Night’s King’s handprint on Bran Stark’s arm.

The crux of “The Door” is Bran Stark learning a vital lesson from the Three-Eyed Raven: He is not a mere observer when he travels through time. There are consequences to his actions, and these consequences have the chance to be devastating. He has the ability to effect the past, and therefore the future simultaneously. In planting the idea of “Hold the Door” into stableboy Willis’ head, Bran condemned him to a life of simple-mindedness but ensured centuries later he’d literally put the team on his back to save the day.

I’d posit that the very same thing happened between Mr. Ventrella and Mr. Martin–that Mr. Ventrella, clearly a traverser of both time and space, placed the phrase “Close the door” into the author’s head at the very moment he needed it most. The clues, like breadcrumbs tossed for the ravens, are all dropped into that fateful blog posts for us to pick up. First, there’s this:

I had previously met [George R.R, Martin] probably ten years ago at another convention — before the Game of Thrones TV show — but we never spoke at that time.

Mr. Ventrella had met the writer a decade prior…without speaking to him. Almost as if he was close enough to observe Mr. Martin, but the author could not see him. As if he was invisible. A watcher, just like Bran. But that was before HBO adapted the Song of Ice and Fire series into a mega-hit, before George R.R. Martin became a veritable “king” of modern fantasy, before his books spawned an entire army of unthinking, terrifying zombies (also known as “show-watchers”). And then Mr. Martin grew in power. He could see Mr. Ventrella now, became aware of his presence. Mr Ventrella, shocked at this development, was forced to interact with the past:

The first time there were some other fans on the elevator who asked for a picture with him, and he obliged.  They got off before our floor, so it was just us.  We walked out and headed down the hall and the conversation went like this:

Martin:  I do get tired of posing for pictures all the time.

Me:  Well, you’re quite famous now.

With that casual reply, Mr. Martin realized: This is his life now. The successful author was now a full-blown superstar. A celebrity. There’d be far more than pictures with fans in an elevator for him in the future; talk show appearances, magazine profiles and, most importantly, and an increasingly daunting amount of outside pressure to finish book six of seven, Winds of Winter. That nugget of info, supplied by Mr. Ventrella, was too much for Mr. Martin. Despite chance after chance, he failed to provide his publishers with a completed Winds of Winter manuscript and finally, inevitably, Game of Thrones overtook its own source material.

So that’s the end, right? The show had won. The world (of ice and fire) was dead. Mr. Ventrella–who I repeat based on obvious clues and one blog post is clearly a skin-walking time-traveller IRL–saw this future coming even as he himself shaped it, in the elevator of a random book convention. He needed a fix. If the show was truly going to spoil the books, he needed to create a moment, no, a straight up twist that would play better on the medium of television than it would in a book, satisfying everyone. And he found it, with one phrase:

As Rob Bricken pointed out over at i09, it almost doesn’t matter how talented of a writer Mr. Martin is–and he is incredibly talented–because Hodor’s origin story undoubtedly plays better on-screen. Book-Hodor is lovable, true, but Kristin Nairn has imbued him with the perfect face for fans to become emotionally attached to over five seasons. The episode’s editing, the way it masterfully cut between past and present, Meera Reed’s frenzied request to “HOLD THE DOOR” echoing eerily dreamlike throughout both, was paced and presented perfectly. Sorry Jon, but this was by far the most effective moment for the show not yet covered in Mr. Martin’s books. It’s THE Game of Thrones moment that bridges the gap between printed page and TV screen.

It all started in an elevator at a random book convention. In one moment, Mr. Ventrella doomed George R.R. Martin to a life trying to catch up to his own creation, of repeating the same phrase over and over–“It’ll be done when it’s done”–the phrase losing meaning to fans more and more each time. But, in essence, Mr. Ventrella ensured the future of Mr. Martin’s at the same time. He gave Mr. Benioff and Mr. Weiss its seminal, non-book Thrones shocker, which Mr. Martin can claim was his idea from the very beginning. Because it was, in his mind, right where Mr. Ventrella put it. Saving us all. 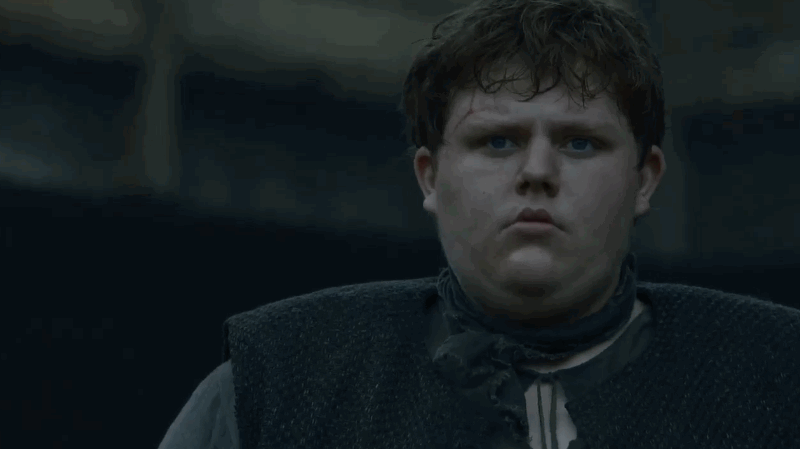