Council Speaker Melissa Mark-Viverito denied that New Yorkers ever voluntarily relieve themselves in public, as she led the City Council today in decriminalizing public urination and a host of other low-level infractions today.

Ms. Mark-Viverito made the claim at a press conference before the Council voted on the Criminal Justice Reform Act. The Act consists of eight bills that will downgrade most noise violations, spitting, littering, possession of an open container of alcohol, public urination and after-dusk loitering and other prohibited activities in public parks from arrest-worthy crimes to offenses penalized with a ticket and prosecuted in civil court.

“I don’t think it’s going to encourage misbehavior, I think it’s a ridiculous argument,” the speaker told reporters when asked if the measures would lead to a decrease in quality of life. “I always use the prime case of urination, I don’t think people really choose to urinate publicly. That’s not something that you really want to do on your own and willingly, i don’t think anyone would want to do that. I don’t think the changes that were proposed would encourage this behavior at all.”

The overwhelmingly Democratic Council voted in favor of each bill in the act by an overwhelming margin, with the measure on public urination scraping closest: 39 in favor, 10 against.

The legislation establishes a system of escalating fines for repeat offenders, and leaves open the possibility of criminal enforcement of such non-violent acts in “limited circumstances”—which a Council source said lawmakers will work out with the police department in the coming months. The Council’s three Republican members voted against the bills, noting that the city has historically struggled with collecting civil fines.

“How would you like it if the person in front of your home was urinating on a regular basis and drinking alcohol and creating havoc on the block, how would you like it if you lived next to the house where they just played bombastic music almost every single night of the week and just drove everybody crazy?” Queens Councilman Eric Ulrich, part of the GOP minority, said. “I think we’re sending the wrong message that your actions don’t have consequences.”

Supporters of these changes have long maintained that the NYPD disproportionately arrests and charges nonwhites for such infractions, often leaving young black and Latino men with damaging criminal records. The package of bills will obligate the police department to collect demographic and geographic information about recipients of tickets, and require the the city to create community service options for people unable to pay the fees.

“Today we are righting a wrong, a systematic wrong that has taken place for far too long,” said Queens Democrat Donovan Richards, whose district abuts Mr. Ulrich’s. “We are sending a very clear message today and I’m proud of this council that redemption shouldn’t be some, it should be for all.” 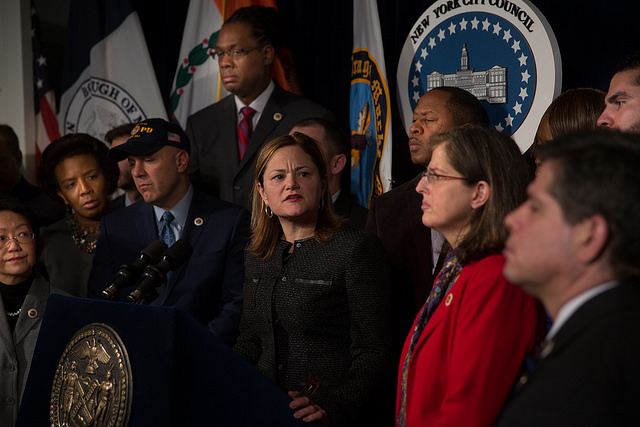