In the 11 years I lived in England and served as Rabbi to the students of Oxford University—and in my many visits since—I have become familiar with the growing voice of British anti-Semites. Even in the hallowed halls of Oxford I encountered rabid Jew hatred, as in my debate at the Oxford Union when my opponents accused Israel of being a Nazi state. I happen to love Union debates and have participated in many. But comparing Jews to those who murdered six million of our own is not just a lie but an abomination. So, it came as no surprise to me when the British Labor Party was roiled by public revelations of the anti-Semitism seething within the party.

The history of Jew hatred in Great Britain goes back centuries and included blood libels and massacres before culminating with the expulsion of Jews from Britain in 1290 by King Edward I. Jews were not permitted to return for more than 350 years, when Oliver Cromwell came to power.

Last century, despite the Balfour Declaration’s promise of the creation of a Jewish homeland in Palestine, the British government refused to grant the Jews independence, imposed quotas on immigration that prevented hundreds of thousands of Jews from escaping the Nazis, and went so far as to place the survivors of the Holocaust in internment camps on Cyprus rather than allowing them to enter Palestine. On June 6, 1946, President Truman urged the British government to relieve the suffering of the Jews by immediately accepting 100,000 Jewish immigrants. Britain’s Foreign Minister, Ernest Bevin, replied sarcastically that the United States wanted displaced Jews to immigrate to Palestine “because they did not want too many of them in New York.” It was anti-Semites in the Foreign Office who also vigorously opposed the creation of the State of Israel.

To be sure, the Labor Party has produced extremely good friends of the Jewish state, like Tony Blair. But that now seems eons ago and the party is spewing disgusting anti-Jewish drivel.

Former London mayor Ken Livingstone, one of the great Jew-haters in all of Europe, recently said Hitler supported Zionism. Not content to associate the greatest murderer of Jewish life in history with the national aspirations of the Jews for a country of their own, Mr. Livingstone went on to declare that the State of Israel was “a great catastrophe.” The bad publicity associated with statements by Mr. Livingstone and others led party leader Jeremy Corbyn to reportedly suspend dozens of party members.

But the rot in the Labor Party starts at the top. I do not believe Mr. Corbyn is an anti-Semite, but what kind of message did he send to his followers when he shared platforms with supporters of Hamas—a terrorist organization committed to the destruction of Israel and the murder of Jews everywhere? Just a few days ago, Prime Minister David Cameron challenged Mr. Corbyn to disavow comments he made in which he referred to Hamas and Hezbollah as his “friends.” Mr. Corbyn refused to do so.

Too many people in Britain—particularly on the left—use hatred of Israel as a foil for hatred of Jews.

The growth of anti-Semitism in the UK is only partly driven by the historical animus toward Jews. It is also a product of a wave of Muslim extremism that has taken root as a result of Britain’s attempt to shed its colonial past and demonstrate it is open to all. Today, there are approximately 300,000 Jews in Britain compared with perhaps two million Muslims. The vast majority of Muslims in Britain are good people, law-abiding and decent, and I salute their commitment to their faith. When I lived in Oxford, I had a warm relationship with the Muslim students, many of whom were regulars at our events. Nevertheless, the number of Muslim radicals in Britain is growing exponentially through the indoctrination of Muslim extremists.

British filmmakers went undercover at the London Central Mosque, considered one of the most prestigious in Britain, and exposed imams “teaching the faithful that God orders them to kill homosexuals and apostates; that they should curtail the freedom of women; and that they should view non-Muslims in a derogatory manner and limit contact with them.”

Radical Islamic views are being promoted by Saudi Arabia around the world—not only in mosques but in universities. The director-general of MI5 in Great Britain, Jonathan Evans, said in 2008 that the Saudi government’s multimillion-dollar investments in British universities have led to a “dangerous increase in the spread of extremism in leading university campuses.”

I can understand criticism of the Israeli government, but too many people in Britain—particularly on the left—use hatred of Israel as a foil for hatred of Jews. This tendency has become acute on university campuses where the anti-Semitic boycott, divestment and sanctions campaign has become a popular vehicle for vilifying Jews under the guise of support for Palestinian rights.

Just a few weeks ago, the National Union of Students elected a new president, Malia Bouattia, who described the University of Birmingham as “something of a Zionist outpost,” complained that the government’s anti-extremism policy was fueled by the “Zionist lobby,” and was endorsed by the anti-Semitic Muslim Public Affairs Committee. That someone of such strong anti-Jewish views can be elected to the national leadership of Britain’s students is simply astonishing. Or maybe not. British academics have also been at the forefront of the campaign to boycott Israeli academic institutions.

Britain’s Chief Rabbi, Ephraim Mirvis, has rightly expressed outrage over the way university officials have turned a blind eye to the anti-Jewish abuse among students and faculty. “I cannot imagine that any vice-chancellor should be proud of the fact that vilification of a people has been taking place on their campus,” he said.

According to the Metropolitan Police, 2015 was the worst year ever for anti-Semitic attacks in London, which increased 61 percent from the previous year. The Campaign Against Anti-Semitism (CAA) reported that 2015 “saw the most anti-Semitic crime ever recorded in Britain, with a 26 percent rise in anti-Semitic crime and a 51 percent leap in violence against Jews, but a reduction in the number of anti-Semites charged by police.” The group also found that “25 percent of British Jews have considered leaving Britain in the past two years due to anti-Semitism and 77 percent have witnessed anti-Semitism disguised as a political comment about Israel.”

The situation has grown so serious that the CAA said “Britain is at a tipping point: unless anti-Semitism is met with zero tolerance, it will continue to grow and British Jews may increasingly question their place in their own country.”

What is happening in Great Britain is happening all over Europe. Dark clouds are gathering over the continent. Many question whether Jews have a future in Europe. The time for expressions of concern is long past. It is time for British and other leaders to take action to demonstrate a zero tolerance policy for anti-Semitism and extremism, failing which, their protestations as an open and tolerant society will be seen as pure balderdash.

Rabbi Shmuley Boteach is the founder of The World Values Network and is the international best-selling author of 30 books, including his just-published, “The Israel Warrior: Fighting Back for the Jewish State from Campus to Street Corner.” Follow him on Twitter @RabbiShmuley. 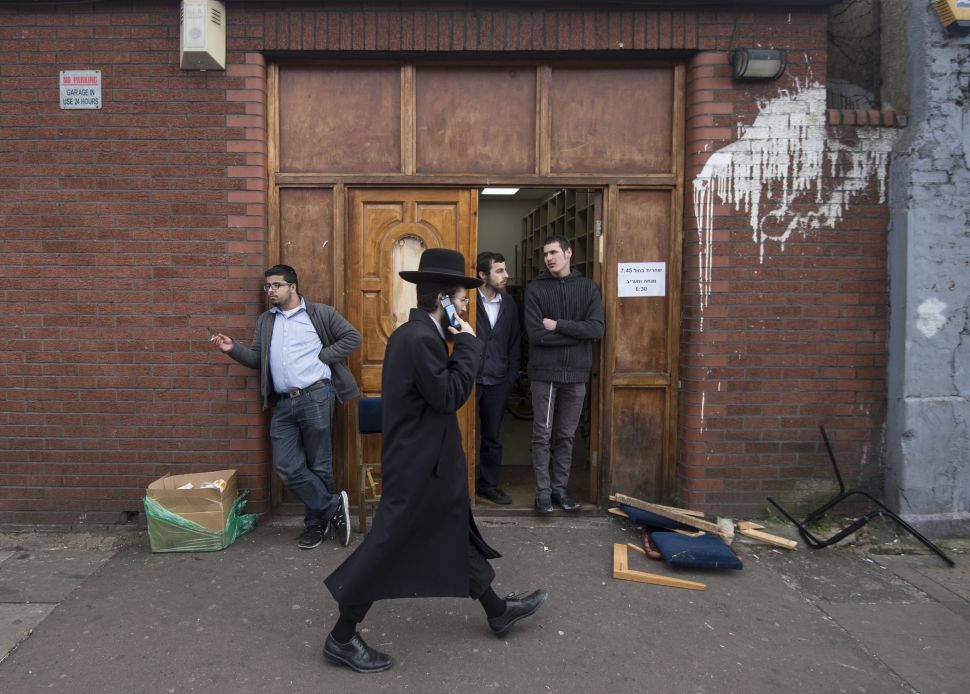