The congressional rematch between U.S. Representative Leonard Lance and Tea Parter challenger David Larsen is getting uglier, with new attack mailers surfacing Wednesday. The new mailers go after Larsen’s conservative bona fides, accusing the four-time congressional upstart of never having voted for Ronald Reagan, cheating on his own taxes and planning to raise taxes on CD7 residents if he takes office.

Larsen has mounted a series of challenges to Lance since 2010, in which the two have consistently taken shots at one another’s fealty to the Reagan legacy. In 2014, Lance beat Larsen by nine percentage points, verus twenty percentage points in 2012. Larsen reported cash-on-hand of $172,793 in April, self-funding $222,263 of his campaign’s $243,646 fundraising total. Lance has raised $582,102 so far, and had $502,124 going into that month. King Penna, Larsen’s key strategist, called the allegations “preposterous.”

The new mailers from the Lance campaign cite New York state voter records showing that Larsen did not vote in the 1980 and 1984 elections, Larsen’s own website and Larsen’s campaign newsletter the Central Jersey Conservative Herald. The ad also claims Larsen “supports higher income tax rates and wants to dangerously weaken our homeland and border security.”

Larsen admitted a spotty history of timely property tax payments back in 2010.

“How would you know how somebody voted, first of all? Second of all the New York state department, because I called, don’t even have records,” Penna said. “So how would they know how he voted or if he didn’t vote?”

Penna added that Larsen’s tax bill with Tewksbury Township has been paid in full.

“It’s slander,” he said of the Lance campaign’s long-held allegation that Larsen has failed to pay his property tax bill in full and on time 21 times since 1996. “We’re going to go all out with this because we’re done with their lies and their half-truths.

“This is what happens when you’re desperate, because their polls show that they’re behind.”

Penna added that he intends to mount a defamation suit against the Lance campaign. 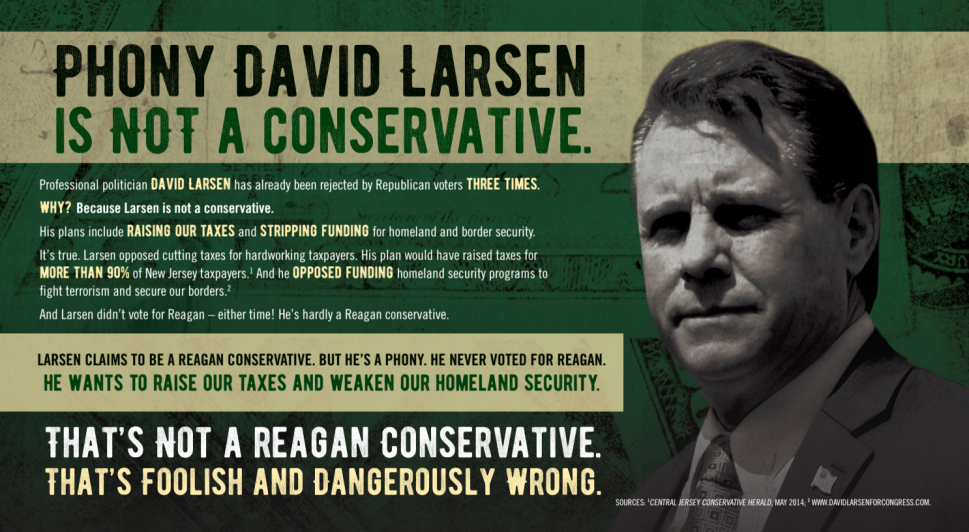