The flyer claims that Mohammed Akhtaruzzaman is “anti Pascrell.”

Flyers have been circulating in Paterson’s Ward 2 and on Facebook that make claims that Councilman Mohammed Akhtaruzzaman collected signatures and campaigned against Congressman Bill Pascrell.

According to Akhtarruzzaman, the flyers are factually untrue. He said he has always been supportive of Pascrell and that the petition signatures depicted on the flyers are not in his handwriting and are forgeries.The literature claims that while Pascrell “was in Washington DC getting money to hire more police officers and fireman,” Akhtaruzzaman was working against him.

“I know that handwriting is not mine,” Akhtaruzzaman said. “We are on the same team. I am with him 100 percent.”

The flyers have no “paid for” line so it is unclear where they originated. According to Akhtaruzzaman, the flyers are likely the work of one of his competitors for the city council: Shahin Khalique.

“The Khalique’s campaign hasn’t had enough by incurring in distributing deceiving information to voters, illegally moving voters into the ward, registering out of town residents into the 2nd ward, performing voter intimidation and harassment and not listing the ‘paid for by’ disclaimer in several of their campaign literature; now they left us with a clear indication that they have committed forgery by falsifying Councilman Mohammed’s signature in a petition,” a statement released by Akhtaruzzaman said.

Now, the councilman claims he has decided to take legal action and will be filing a lawsuit against Khalique in the coming days.

“We are asking the attorney general, the Passaic County prosecutor, and the superintendent of elections to put an end to the voter fraud currently happening in the 2nd ward,” Akhtaruzzaman’s statement said. “The residents of the 2nd ward have the right to elect their representative freely, without harassment from any campaign and basing their decision of factual information. The actions taken by the Khalique’s campaign are nothing more than a reflection of his character and past behavior.”

PolitickerNJ reached out to Khalique’s campaign for comment but did not receive a response.

Former councilman Aslon Goow and community outreach leader Eddie Gonzalez are also pursing election in ward 2. The four candidates will face off in the May 10 primary election. 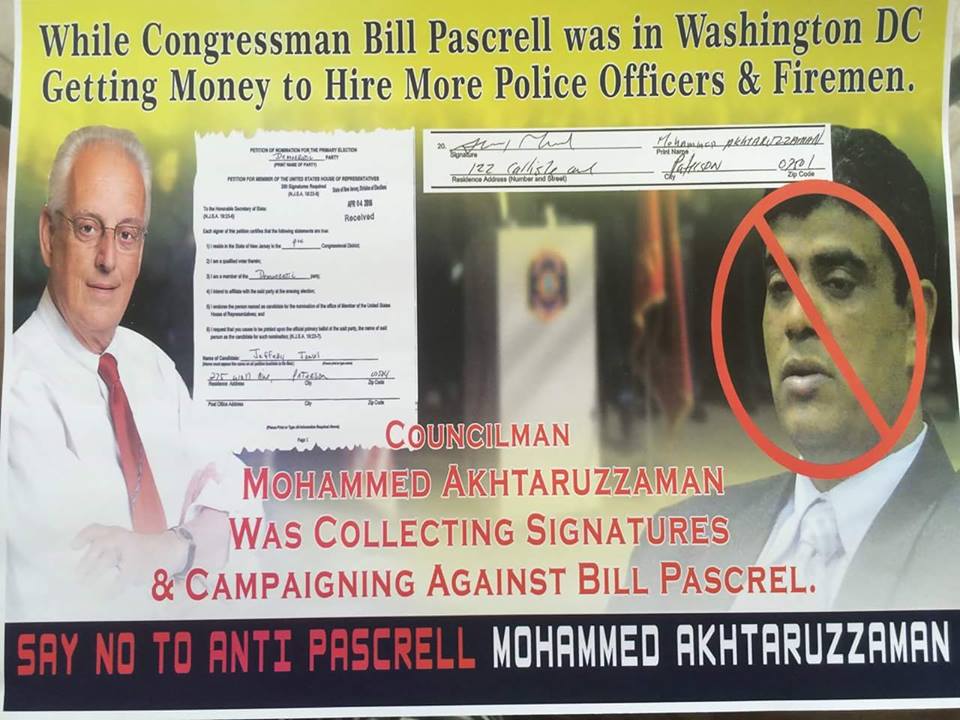