Over the last week, I received a flood of what can only be described as hate mail… for the first time since sixth grade. All stem from several pieces published that are critical of Senator Bernie Sanders, his presidential campaign’s messaging and tactics—and the overall demeanor of his supporters. All come from my perspective as a Democrat and a progressive onlooker. Much like the Beyhive, which descends with fury on any rumored Becky with the good hair, the Berners also lash out, unhinged, on any perceived heretic to dares question their prophetic candidate or his place in the race.

It’s been quite a wake-up call.

Among the ugliest? “Jon Reinish deserves to watch his children die of brain cancer. We all know you media bastards are trying to colour the race and you will be remembered.”

Despite the quaint Anglican elegance of the spelling of the word “colour,” this is undeniably sadistic. But read between the lines and it speaks volumes. Because by this sentiment, it is obvious that—thanks to repeat assertions from Mr. Sanders, Jeff Weaver, Tad Devine and others—powerful forces are fleecing the campaign, robbing and disenfranchising Mr. Sanders’ supporters, and egregiously manipulated outcomes have filtered down to become accepted mindset. Borderline personality issues aside, it’s clear that whatever fevered, twisted little brain wrote this has heard and absorbed these repeated sentiments.

We’ve been here before. Recall how insane Planned Parenthood shooter Robert Dear directly parroted Carly Fiorina’s “baby parts,” language following the Colorado Springs clinic assault last year? Similar idea. And while, to be clear, the two situations are totally unrelated and I’m not literally equating the two, what is obvious is that the Sanders campaign requires an urgent remedial course on basic civics lessons.

In politics, words matter. Campaigns should know this, particularly those for President. Especially knowing that our politics are pitched on the best of days, and endgames—such as the one the Sanders campaign currently finds itself in, and not a minute too soon—get emotional, candidates have responsibilities to recognize that they are powerful figures, occupy a bully pulpit and exert influence. They need to conduct themselves as such. Mr. Sanders and his campaign have not.

Regarding the messages I received (thanks to messages from dozens of Mr. Sanders’ supporters, I could literally spend the rest of my life going and f*cking myself), this isn’t about drawing sympathy or a smirk. I have tough skin and can demonstrably take it as well as I can dish it. I’m reprinting this reprehensible language to contextualize these words as part of a far broader and infinitely more troubling trend: make no mistake that this is the rhetoric coming out of Camp Sanders and that it has real consequences. And the candidate is doing nothing to stop it. In a word, he needs to prove that he’s a leader and a responsible candidate and do so immediately before somebody gets hurt or fire meets gasoline. And if he continues to stand passively by while this transpires, that’s nothing short of tacit approval.

With alarming frequency, Berners are turning Democratic events into distorted omegas of the most grotesque alpha Trump rallies.

Don’t believe me? Look west. This past weekend, the Nevada Democratic party conference descended into chaos, as dozens of Sanders supporters confused revolution with anarchy, high mindedness with the low road, and challenging the system with actual aggressive violence. Once again, the campaign and its followers felt in their righteousness that they are above the rules of the very party the candidate is trying to lead. After disallowing several Sanders delegates due to ineligibility, the supporters of the gentleman from Vermont broke the room apart. Fists and chairs flew. Following the fracas, the state party chair, Roberta Lange, received death threats from Sanders supporters (such great liberals). The locations of the homes and schools of her family—including a grandchild—were leaked, as were cell phone numbers; family members have seen harassment and worse by Mr. Sanders’ loyal supporters (best liberals I’ve ever seen!).

With alarming frequency, Berners are turning Democratic events into distorted omegas of the most grotesque alpha Trump rallies and parroting blunt tactics that every progressive should stand together to decry. I would expect Bernie Sanders, a self-proclaimed lefty who has carefully created a persona that purports to embrace a gentle, loving, inclusive, old-school brand of free-to-be-you-and-me liberalism—but whose actions of late tell another story—to be better than Donald Trump. In this instance he’s getting so dangerously close to the Trumpian border I’m afraid he’s going to get a black and blue mark or worse when he hits that Mexico-financed dream wall of the Donald’s. Weirdly, man-of-contrasts Bernie Sanders has long campaigned on his participation in the student-led nonviolent peaceful protests of the sixties. It would be great if he actually ripped a page from his own biography.

Just as Mr. Trump appallingly shrugged and said his supporters, “feel passionately about their country,” when two supporters beat a Latino man and used the candidate’s ugly, hate-filled squawks about immigrants as cover, Mr. Sanders, instead of immediately condemning such behavior and sternly warning supporters that such activity has absolutely no place in his campaign, gave a way-too-brief nod by denouncing physical violence—and then merely fed the fire, maintaining the Nevada convention was intentionally mishandled and, “At that convention, the Democratic leadership used its power to prevent a fair and transparent process from taking place.”

He’s feeding the paranoia that demonstrably leeds to such outcomes. By intentionally enhancing the perception that his campaign, about which his supporters feel passionately, is being undercut and not permitted by powerful insider forces to succeed he himself bears responsibility for what transpires. Cause and effect. In the days following Nevada, even as Hillary Clinton surged to victory in Kentucky, putting the race even further out of Senator Sanders reach? Surrogates like Ohio State Sen. Nina Turner fanned out across the political landscape basically trying to flip the narrative and, instead of warn Mr. Sanders that he needs to take responsibility and seize control of the situation, pressed the case that it’s the Democratic party and supporters of Hillary Clinton who need to bow down, get right, and get with the program. Senator Turner and heads of the nurse’s union, Mr. Sanders’ not-Super PAC, ratcheted up the rhetoric and began to threaten protests and worse at the convention in Philadelphia. The hostage-taking arrogance is mind-blowing. I will blow this up, they all seem say, quivering sweaty thumb hovering over the switch.

Every election his a choice between two candidates. But it’s more than that. It’s about, who speaks for me? And while campaigning is obviously very different from governing, it is a sort of preview; a look into the future of what’s likely to shake out once a candidate becomes an official. Democrats, given the choice this round between Hillary Clinton and Mr. Sanders have so far resoundingly answered, “Hillary Clinton,” and the past few days make it even clearer why. It’s gone from profoundly disappointing to potentially destructive that Senator Sanders and his campaign have not decided—so far—to end this campaign as they began it: passionate progressives unflinchingly pushing some of the issues that matter most to the identity of the country. Instead, they’ve chosen to conclude on a bitter, toxic, paranoid note that’s a vicious circle of their own making. Hopefully, the Senator will quickly reassess and reverse direction over the next few days and reclaim a quest guided by a higher minded purpose—and make it abundantly clear that he expects the exact same from his campaign and his supporters. I wish I was more confident in his doing so. 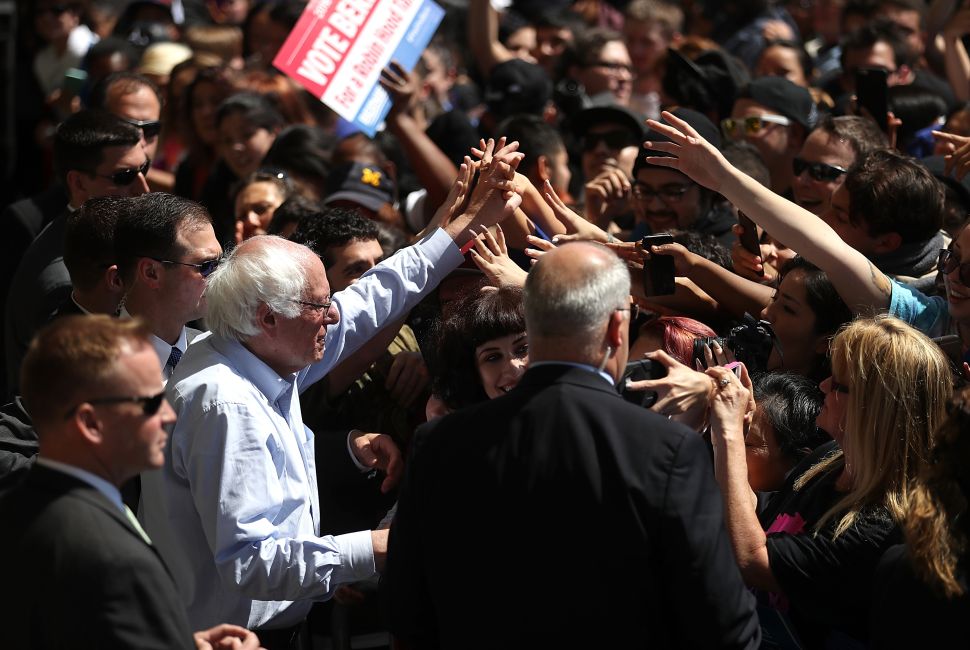