In case you don’t already know it, Richard Serra is a very famous sculptor.

A historically important artist who both ushered in and defined post-minimal art in the late sixties and early seventies, Mr. Serra has been dropping his heavy artistic imprint literally across the globe ever since, planting large-scale steel commissions everywhere from the desert sands of Qatar to a remote patch of soil off the coast of Iceland.

But some of Mr. Serra’s earliest works were actually radical performances (inspired by the “action” painting of Jackson Pollock) in which he hurled molten lead at the corner of the gallery between the wall and the floor, creating long wedges of hardened steel. Those works became the very definition of what is now commonly referred to as “process art.”

Eventually his interest moved toward the psychological effects of sculpture, particularly as they relate to scale and weight. His abstract steel works got bigger and bolder, and soon became known as ”experiential” feats of industry that not only permanently alter our perception of the surrounding environment, but also manage to arouse feelings of anxious trepidation in their dwarfed human viewers.

This boldness came to a head when the Arts-in-Architecture program granted him a commission for the Foley Federal Plaza in New York City which in 1981 would become Tilted Arc: a 120-foot-long piece of steel that bisected the Plaza, making it difficult for workers to navigate the area. After a lengthy court battle during which Mr. Serra famously stated “Art is not democratic… It is not for the people,” the artwork was expelled from Federal Plaza less than eight years after it was installed.

Having Tilted Arc removed didn’t exactly shatter Mr. Serra’s confidence though. He began producing even larger steel artworks over the following decades, culminating in his current two-gallery show at the 24th street and 21st street Gagosians in Chelsea, up through July 29.

The highlight of this show is a massive maze of an object called NJ-1, 2015, which fills the nondescript 21st Street gallery interior. It’s a curving, reddish loop that one is forced to run the gauntlet of, and yes: it’s somewhat scary being enveloped by so much heavy steel, not knowing when or where you’ll gain exit.

But this was pretty much the same feeling conjured by Inside Out, 2013, which was shown at Gagosian just three years earlier. And in fact, William S. Smith in Art in America felt that Inside Out was far too similar to previous works, saying: “Inside Out, a maze formed by two long, wavy metal sheets… feels like more of the same. Walking through the meandering structure involves navigating a circuit that alternates between narrow pathways and disorienting atriumlike spaces, with twisting orange metal always overhead.”

NJ-1 is pretty enough, with its variegated rust-colored surface and sleek curves, as is the dense gray rectangle titled Silence (For John Cage), 2015—a 29 foot long solid slab of steel that fits perfectly into the big back room of the 24th Street gallery—but at what point does the redundancy of these Serra sculptures affect their quality?

Artistic consistency is something that’s desired by collectors, galleries and the causal art viewer. People that have a monetary stake in an artist don’t want that artist to “go off the rails” by trying (or failing) to make something completely different. It confuses the public and could undermine the prestige that the artist (and the artist’s team of advisors) has worked so hard to attain over the years. So it’s not surprising that Mr. Serra has stayed the course with respect to his massive steel works, which have been coming to Gagosians around the world regularly for almost 20 years.

Surely an artist gains something—like assuring a certain level of quality—by not venturing far from tried-and-true ways of working, but he or she just as surely loses other qualities: exploration, chance, risk, excitement and relevance.

Walking amongst the roughly 50 tons of steel in Mr. Serra’s shows, which was mined in France and Germany and sculpted in Europe before being shipped to New York via ocean freighter, it’s tempting to moralize against the work. Isn’t this wasteful to forge 50 tons of steel and ship it across the Atlantic? For what? A few nice curves? Steel is a dying industry, and mining it can be hazardous for the environment, but discussing the carbon footprint of Mr. Serra’s project is beside the point. The important question, in terms of his legacy, is whether new versions of this work have relevance.

The world is a very different place than it was in 1980. Computer technology and science has exponentially heightened the importance of unseen or unfelt space, showing us the limits of our sensory powers. Scale—on human terms—isn’t what it used to be.

In regards to Mr. Serra’s style, the “raw look” that he and other Minimalists favored in the 60s and 70s (the mantra of which was “truth to materials,” a concept that insisted real beauty and iconic truths could be found within basic materials rather than handcrafted objects) has become entirely co-opted by fields ranging from interior design (where one has only to look at the “industrial-chic” look adopted by most high-end Chelsea galleries) to furniture design (a field dominated by large retailers that mimic that look, such as West Elm or Restoration Hardware). Mr. Serra’s construction ideas have also been integrated into other art forms over the years, particularly in architecture by heralded practitioners such as the late Zaha Hadid. Today we have access to immersive and artistically wrought spaces like Serra’s, but we live, work and shop in them.

So about now you’re saying: Well if Richard Serra influenced so many people, he must be a great artist, right? And to that I say: yes he was a great artist, but he has been stuck in neutral for a long time—unable to create outside of the idea of Richard Serra that he’s built over the years. He desperately needs to go outside his comfort zone, and there are plenty of exit strategies he can take while still being the Richard Serra we’ve come to know and love. Let’s hope he takes one soon. 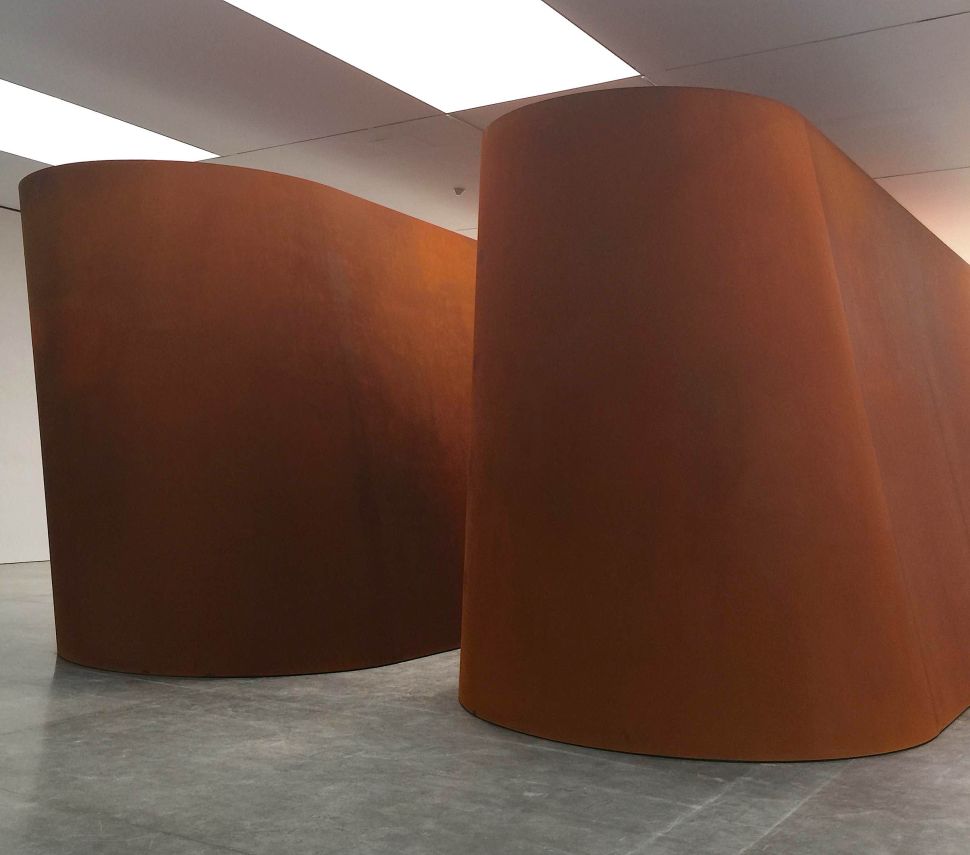