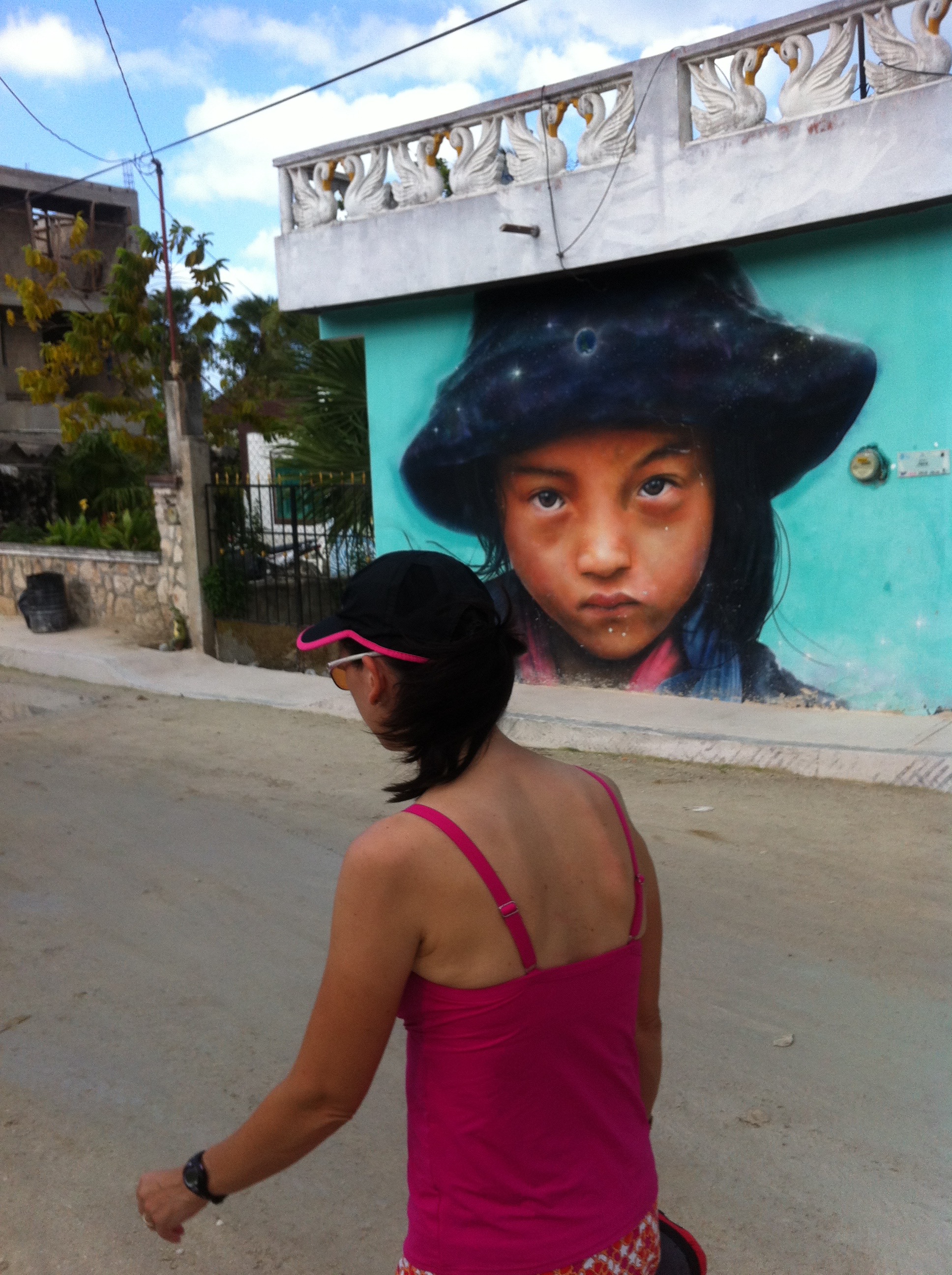 ISLA HOLBOX, MEXICO—The original owner of Villas Flamingos in Isla Holbox, Mexico named
his beachfront hotel after the iconic neon pink birds that long
congregated in front of the property. But in recent years the
flamingos have apparently flown the coop. According to Carlos Grauches, the
general manager of the recently expanded resort, the flamingos
apparently found the tumult from a tourist influx in the area
disquieting and have moved to a yet undeveloped stretch of the island.

Isla Holbox (pronounced “holl-bosch”), about a two-and-a-half-hour
journey from Cancun by car and ferry, is at a tourism tipping point,
and the flamingos symbolize significant changes to the local
environment. Many people, tourists and locals alike, compare Holbox
(population 1800) to Tulum before it turned into Brooklyn South 20 or
so years ago. Today, many publications hail Holbox as the next Yucatan
hotspot; Conde Nast Traveler dubbed it “electric island” (the reporter must
have missed the regular brownouts), The New York Times just named it one of
the “52 Places to Go in 2016,” and Vogue gave it an approving air kiss
in the form of a long photo essay chronicling a trip by fashion designers
Irene Neuwirth and Albertus Swanepoel and their swish pals to the “artistically minded
bohemian hideaway.”

For now, the pace of the island remains languid, a chic
Mexican Mayberry.

The completion of a new highway from Cancun about two years ago
significantly cut travel time to the island, attracting flocks of new
visitors; last Christmas almost all of the roughly 500 rooms on the
island were booked. A developer has bought up a swath of land away
from the main village and there’s talk (and fears) of a mega-hotel, a
golf course and even a bridge to Cancun. The developer, which has been
accused by many locals of using underhanded tactics to secure the
property from local landowners, tweeted that  “Our intent is not to
convert #Holbox [into] a spa, or a racetrack and much less a Cancun.”
Few here believe that promise. “The biggest fear is the loss of
control of keeping the bad guys out,” said Chendo, who owns a
leftist-theme restaurant Viva Zapata!, replete with a mural depicting
armed guerrillas taking it to the man. “Holbox is a very safe place where
everyone looks out for their neighbors.” 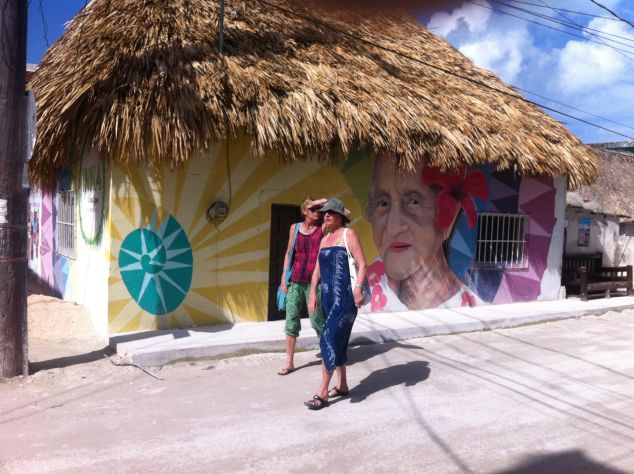 For now, though, the pace of the island remains languid, a chic
Mexican Mayberry. According to José Martí: A Revolutionary Life, in
the late 19th Century the Cuban writer and revolutionary visited
Holbox, which he described as a tiny fishing village “frequented by
cayucos and smaller canoes, which trade in turtles and cazones
[dogfish].” Fishing remains a livelihood for many locals. Brightly
painted skiffs, most about 16 feet long, stand out against the
white-sand beaches. Rolls of nets are strewn about. Some salvaged
rowboats double as beach beds at several resorts.

Juan Karateka, proprietor of a local sightseeing operation and owner
of his the red, green, yellow striped boat La Piola, noted that locals
once kibitzed about fishing—“How big was that fish? How many did you
catch?” Now money is a more common topic of conversation.

There are practically no cars traveling the sand-packed streets, which
can turn into lagoons after a fierce tropical rain. Instead, people
stroll in the shallow Gulf of Mexico or ride golf carts, ATVs and
bicycles. Drivers, including tweens at the wheel next to their beaming
parents, routinely ignore the handful of stop signs. That’s acceptable
behavior, as Matthias, an expat German who rents bicycles, explained;
in Mexico only traffic cops are authorized to stop drivers and Holbox
has no traffic cops (The town padres I was told have installed wooden posts at
the entry to one of the island’s main piers to prevent drunk drivers
from parking golf carts in the drink).

The few thick-armed cops on the island hanging out by Holbox’s central
square are friendly and seem happily underworked. After a free dance
recital ends in the public amphitheater across from the whitewashed
Catholic church, the cops double as roadies, stacking red plastic
chairs. On Christmas Eve, sirens blare at about nine at night, because
the police pickup truck serves as Santa’s sleigh. Papá Noel throws
candies at a gaggle of children who trail the vehicle as it crawls
around the square. After two loops, Santa waddles up the stage and hands
out presents—plenty of dolls and bikes with ribbons on the
handlebars—in a communal gift-giving ceremony.

Community matters in Holbox. As Noa Watson, a Californian married to
Chendo, told me, she plans to live on the island until her “dying
day.” Yet she knows she will never be truly a holboxeña. Islanders,
she pointed out, take care of one another: “No one would ever go
hungry here, as there is always a fish on the grill and always an
invitation to eat.” On the flip side, the community can drum out
undesirables. “There are unwritten laws,” Ms. Watson explained. “I
have seen a handful of people been literally voted off the island for
bad behavior: one screaming at an elderly woman, another walking
around topless.”

The demands of discerning tourists, the Vogue readers, can spur
misunderstandings. Breakfast, for instance, at a local café can take
forever, because the restaurant’s owner expedites orders one at a time but
won’t offer waiting guests a cup of coffee, which would deviate from
her rigid system. Ms. Watson just patronized a restaurant on New Years
Day “and the clientele was irate,” she reported. “Culturally on New
Years Day, people continue the party, so half the employees were not there
(those who were there had not slept). Random family members swarmed the kitchen trying to get service out but there were just too many people to serve.  The clients were not happy to wait—under a beautiful sky—in front of a wonderful beach.  It was painful to see.” 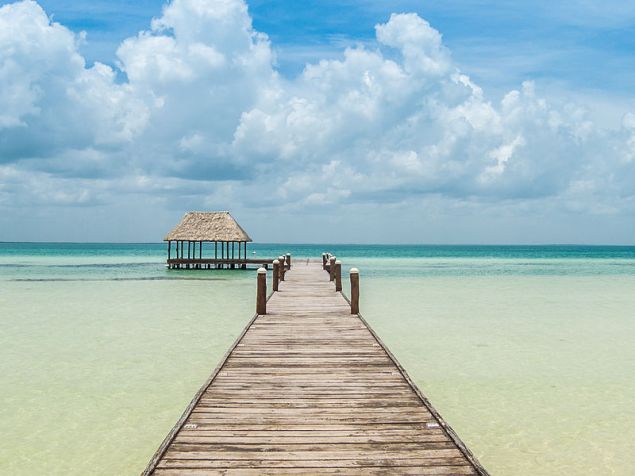 The pier at Isla Holbox. Wikimedia

Ms. Watson hopes Holbox will grow organically and tourists will blend
in rather than fray the societal fabric. Many festivals, boisterous
fishing tournaments, and quinceañera ceremonies for 15-year-old girls,
she noted, purposefully disturb the peace. “No one really cares if the
loud music keeps up the tourists all night (THANK G-D),” she wrote by
email. “Of course,” she points out, “if any tourist wants to partake,
they are more than welcome and are invited for food and drink—no
problem.”

Ms. Watson, who owns a jewel box of a jewelry shop, added that what
sets Holbox apart from other Mexican resorts is that locals retain
ownership of nearly every business. “So whereas with Playa del Carmen
and Tulum, the tourists are completely separated from the locals and
the community,” she said, “here in Holbox it is all one. It’s nice to
be able to always have the locals on the beach and in the shops to
talk to. My husband says that Holbox has ‘alma’ (soul), whereas other
beach communities have been stripped of theirs.” 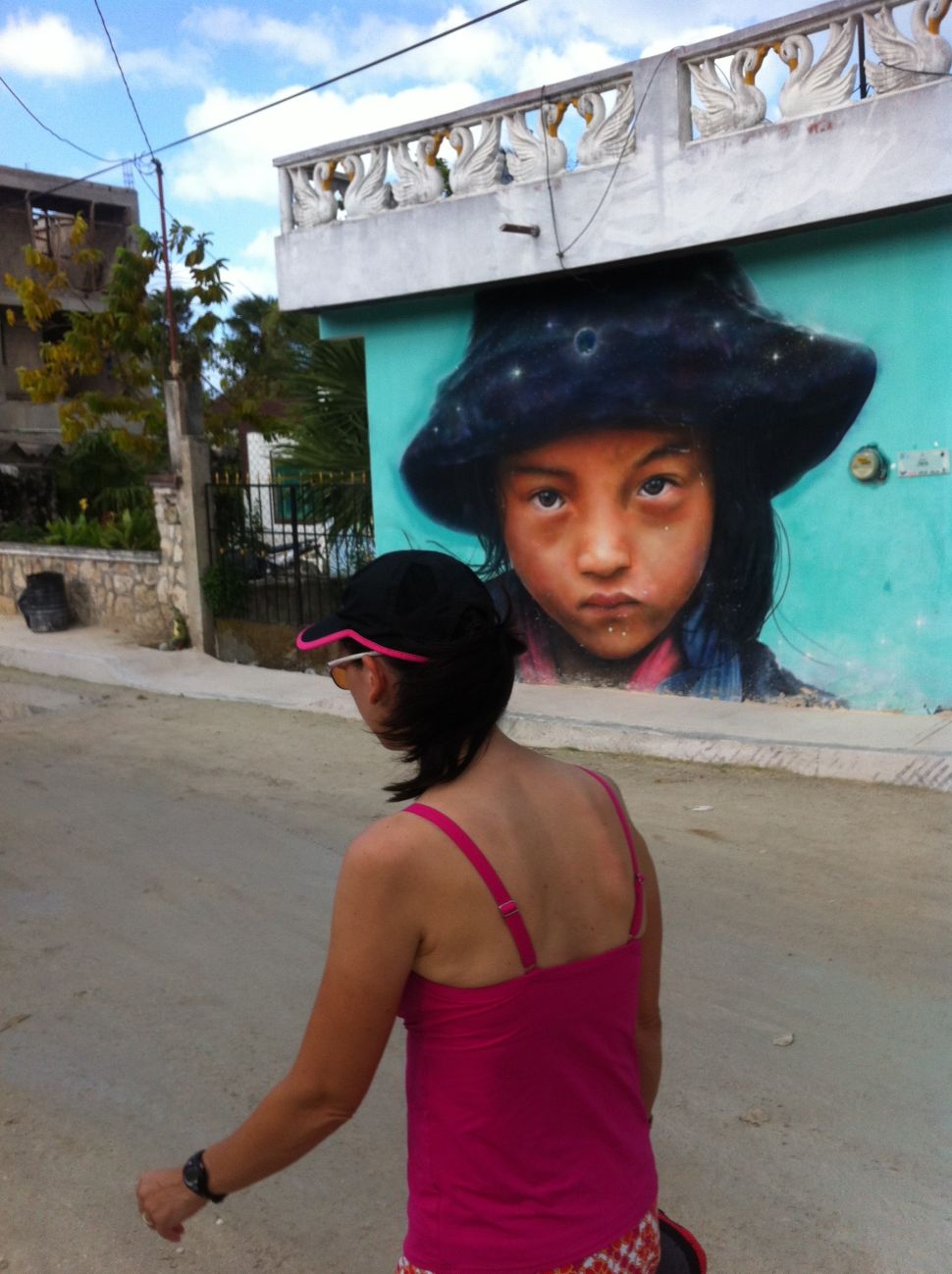