An event hosted by a pro-Israel student group ended abruptly Wednesday night as police were called to protect attendees from an angry mob that had gathered. One student who never made it inside the venue called 9-1-1 as she hid in fear from anti-Israel activists who chased her into a building on the University of California-Irvine campus.

Sophomore Eliana Kopley had just left a Holocaust-related event when she was walking toward the facility featuring a screening of “Beneath the Helmet,” a documentary about the Israel Defense Forces. As she arrived at the event hosted by Students Supporting Israel, Ms. Kopley was met by an angry crowd pounding on the doors and windows—engaged in violent chants targeting the Jewish state.

“I was terrified. There is no other word to describe how I felt,” Ms. Kopley told the Haym Salomon Center.

With the crowd physically forbidding Ms. Kopley from attending the event and chants inciting violence against Jews and Israel such as “Intifada, Intifada—Long live the Intifada!” and “F**k Israel!” Ms. Kopley walked away from the scene.

But she was not alone. A group of female students followed her as she escaped to safety in the room nearby.

“When I turned back, at that moment, I looked at one of the girls and wanted to hide and cry,” Ms. Kopley said.

Throughout this entire time, Ms. Kopley never hung up the phone with her mother, who was anxiously fearful on the other end of the line.

“My mom keeps asking what’s going on. But I couldn’t even say complete sentences. All I managed to say was ‘protesters’ and she started yelling at me to call the cops,” Ms. Kopley said.

So she did. As the chanting heightened, Ms. Kopley remained on the line with 9-1-1 until an officer found her shortly after. Two officers, who decided it would be best to put on black rubber gloves to protect them from sharp objects, escorted her through the crowd of protesters to the nearby film screening safely.

UC-Irvine is no stranger to anti-Israel activity and incidents of anti-Semitism.

Earlier this month, Jewish and pro-Israel students found themselves caught in what they describe as a “fire of hate” and feelings of mourning as they observed Holocaust Remembrance Day. The Muslim Student Union, Jewish Voice for Peace, Students for Justice in Palestine and the American Indian Student Association just happened to organize a week of anti-Israel activity marketed under the title, “Anti-Zionism: The Roots of Oppression,” during the same week.

A 2012 report by the Anti-Defamation League documents a decade of anti-Semitism on UCI campus. The Muslim Student Union (MSU) is named as the leading culprit of anti-Semitism on campus. In 2010 the student group was suspended for a semester after nine students from the group were arrested for disrupting the speech of Israeli Ambassador Michael Oren.

As Ms. Kopley was being rescued by police, local and campus law enforcement agencies also arrived to protect Jewish students and pro-Israel activists from the protestors. Police brought Ms. Kopley to the screening safely, but as she was comforted by fellow students she was overtaken by emotions and began to cry. The dozen attendees, as well as two veteran IDF soldiers who were invited to participate in a panel discussion, were escorted by police in two groups back to campus to ensure their safety.

Ms. Kopley was offered police protection for the remainder of the week. She was grateful but turned down the offer, preferring to stick to the buddy system, which would ensure she was not alone after the violent encounter.

“Since last night, at least once an hour, I fight back tears,” Ms. Kopley said. She also shared she wasn’t able to sleep the night of the incident and missed class in fear of her safety.

Ms. Kopley’s mother, a San Diego psychologist, explained to her that these are signs of verbal trauma.

Protest organizers Students for Justice in Palestine (SJP) commended the demonstration on Facebook, calling it a “success” and justifying the violent protesting tactics because of the presence of police and IDF soldiers.

Students Supporting Israel also made a public statement on Facebook stating, “While it saddens us that there exist individuals who are more interested in shutting our Peace Week down, we at SSI want to assure you all that we are not backing down in the slightest.”

SJP has not responded to multiple requests for comment. 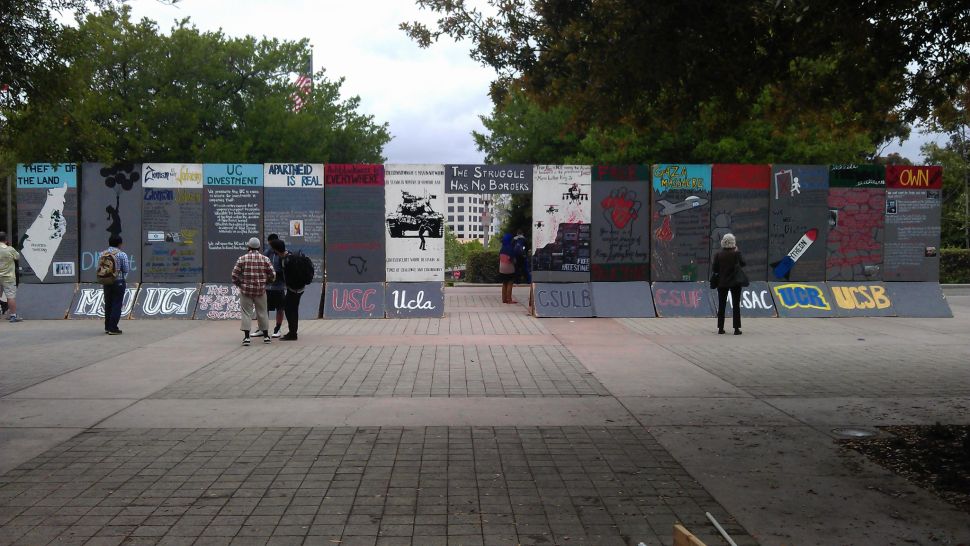