Keegan-Michael Key and Jordan Peele’s first full-length feature, Keanu, continues the duo’s on-point message, one they’ve addressed frequently in their Key & Peele skits: breaking down the racial stereotypes that haunt African American men. But this film, which opened April 29, also addresses another seriously underrepresented stereotype, one I’m so excited to see torn down: the anti-cat hatred in Hollywood. Felinism, if you will.

From white fluffy supervillain sidekicks, to aloof, uncaring house pets, cats are constantly depicted as hateful, evil, selfish, destructive, or cruel. Cat humor, like sexist humor, plays up harmful stereotypes about cats and the people who love them. Yet, cats are beloved on the Internet for the loving, joyous, adorable creatures they are. What is Hollywood not getting? Why do they continue to promote the old, boring, false stereotypes surrounding cats?

Of course, the same question should be asked of races and genders too, as Hollywood isn’t doing much better by them: constantly casting white performers as characters of color; producing and promoting male-led action films with one single, stereotypical woman to provide eye candy; relying on the same tired, boring character types and gender- and race-based humor. But while creators may justify their choices by saying these movies sell better or these actors have more bankability, are Hollywood’s cat movies really that successful that they can say the same thing?

Let’s look at a few of these films. There are countless examples of cats that are evil or cruel. From Bela Lugosi’s The Black Cat, to the Siamese cats (don’t get me started) in Disney’s Lady and the Tramp, to the more recent Cats & Dogs, the cats play at least tricksters, if not full-on evil baddies; mischievous villains who only want to be cruel or destructive. Even in the captivating and breathtakingly beautiful The Jungle Book, in theaters now, the “Big Bad” is Shere Khan, a fierce and cruel tiger. Yes, I know the kindly Bagheera is also a cat, and there are other evils in the jungle (primarily Kaa the snake, and King Louie the Gigantopithecus). But panthers look less like the household cats we know than tigers do, and the other villains in the movie are just after their own desires. They’re not as actively cruel or hurtful as Shere Khan.

On those occasions when cats have a presence as house pets or plot devices, they’re depicted and treated horribly: as an unwanted bother (Inside Llewyn Davis, Meet the Parents), as a rascally pest (The Aristocats, That Darn Cat), as a scapegoat, or as a victim of cruelty or horrible violence (Breakfast at Tiffany’s, The Grand Budapest Hotel, The Girl with the Dragon Tattoo). Kevin Spacey soon plays a neglectful father who’s punished by having his soul placed in the body of a cat, which he despises, in the upcoming (and awful-looking) Nine Lives. The one cat in The Secret Life of Pets trailer is a cold, selfish, unfeeling ball of fur.

[youtube https://www.youtube.com/watch?v=i-80SGWfEjM]
The few films showing kind, gentle feline pets are aimed at women (The Truth About Cats and Dogs, While You Were Sleeping) and they frequently convey not-so-hidden flaws about the character—especially loneliness. In Hello, My Name is Doris, for example, it’s used to show the sad and mentally unstable status of the titular Doris, and her mother, who both faced hoarding challenges.

It’s rare to find cats in male-oriented movies and blockbusters. The two examples that leap to mind are the James Bond movies, where supervillain Stavros Blofeld holds a beautiful white Persian on his lap (again, cat as a depiction of evil), and the Alien movies. Jones is partially a hero, but he’s also used for cheap scares, and you never know if he’s been compromised by the alien.

Otherwise, cats are the butt of the joke. In The Heat, the lonely, friendless Sandra Bullock has a cat for companionship, because no one else could love her. In Parks & Recreation (a show I otherwise adore), in the episode “Camping Trip,” the gang stays at a bed and breakfast owned by a potentially unhinged older woman with her dozens of cats all over the house, getting in the way and freaking out the guests (this character has a triple threat offense: sexist, ageist, and anti-cat). In Spy, Melissa McCartney is finally given her first undercover alter ego: a “full cat lady” with tight curly wig, thick glasses, and mismatched clothes that include a giant cat head pictured on her t-shirt.

Hollywood’s sexism and anti-cat stance often go hand in hand. The expression “crazy cat lady” sums up the issue, and it’s tossed around much too frequently. Ignoring for now that the word “crazy” is problematic, it’s insulting to imply that one has to have a mental disability in order to love cats, especially if you own more than one. The jokes are cruel and humorless, and the cats are neurotic, chaotic, disruptive, or evil. Either there’s something wrong with them (ie: they poop too much), or they’re doing something sinister. Even if reference is made to a cat that’s off camera, you hear that loud, horrible shrieking mrowr (like the Wilhelm scream of the cat world) that conveys unpleasantness, rather than a simple mew. I don’t think I’ve ever heard that sound from a real cat in my entire life.

There are no “crazy cat men,” nor are there “crazy dog ladies.” It’s an asinine stereotype, but one that hasn’t quite died off yet, or been challenged enough.

Stereotypically, men are associated with dogs, and Hollywood dogs show only the best traits of man: loyal, brave, kind, trusting and trustworthy, reasonable, and hard working. Women are associated with cats, and Hollywood cats exhibit only the worst traits: manipulative, opportunist, flighty, neurotic, selfish, beautiful, but ultimately useless. Like dogs, men chase women, but it’s considered unmanly for men to love or own cats. There are no “crazy cat men,” nor are there “crazy dog ladies.” It’s an asinine stereotype, but one that hasn’t quite died off yet, or been challenged enough.

Just like film’s representations of women or people of color, the more movies show negative depictions of minorities (whatever the minority) the more likely that image or false depiction will become what viewers expect. It’s easier, and lazier, to use the same old stereotypes over again.

At Last, A Pro-Cat Film

But now, finally, there’s Keanu. Keegan-Michael Key and Jordan Peele play Clarence and Rell respectively: mild-mannered friends who pose as hardened drug dealers in order to get back Peele’s eponymous kitten, who was cat-napped by a criminal gang leader. They not only deconstruct the African American stereotype and the image of how black people are “supposed to” talk and behave, but they break down the negative cat stereotype and instead showcase their cuteness. They show that cats are not evil (nor are some people, even if they do evil things), and that it’s ok for men to love cats. They see beyond the stereotypical Hollywood cat clichés and instead, harness the power cats have over the Internet, coupled with their own experience creating viral videos (the clips from their Comedy Central show have garnered millions of hits on YouTube), to make this film.

Even through long stretches where the cat isn’t on screen, he still drives the plot. Keanu is adorable, and everyone in the film knows it. All the characters, from the meekest nerd (Clarence) to the toughest criminal (Method Man, as “Cheddar”), love the cat, and all the film’s action is instigated out of love for the sweet creature. You think the bad guys are going to harm the kitten, but no, they all want him for themselves. Several warring drug gangs get involved, but rather than a turf war, it’s a fur war, fighting over who gets to keep Keanu—though each gang has their own name for him (and they’re all manly, culturally-specific names; no “Fluffy” or “Jinxy” here). The idea of these badass men fighting over a tiny, adorable kitten is an awesome, welcome twist.

Keanu is smart, resourceful, loving, and fiercely loyal to the movie’s hero. He saves Rell at least twice in the film. The only action the cat makes, which in other movies would be used to show the neurotic, distrustful, harmful action of cats, is when (spoiler?) Keanu attacks the bad guy who is attacking Rell. Which of course means, Keanu’s the real hero!

The idea of these badass men fighting over a tiny, adorable kitten is an awesome, welcome twist.

And best of all, the film doesn’t use any CGI, good or bad, at least not where the cats are concerned. Keanu director Peter Atencio insisted on working with the real kitten (well, the seven kittens) that play Keanu, to emphasize the cuteness factor and show cats more as they truly are, rather than relying on terrible CGI to show a horribly behaved and abused cat (like in Nine Lives). They know how awesome cats are, and they went to the energy and expense to illustrate it, training the kittens to meow on command, wear hats, and dodge fake bullets.

My only complaint is that they use a young kitten and not a full-size cat. I understand and appreciate their wanting to play up the adorable factor, and that younger cats are easier to train, but kittens are always easier to adopt and find good homes than adult cats, even if the “adults” are only a couple years old. Kittens grow very quickly—part of why the Keanu crew needed to use a team of them. But older cats are just as sweet, loving, cute, and playful as young kittens, and many of them are looking for loving forever homes. There are also too many cats and kittens who need homes, so for everyone in Keanu to be fighting over this one kitten made me a little sad. But we’ll let that go, for the sake of the plot.

I’m so glad Key and Peele applied their brilliant hilarity and eye-opening social commentary to our feline friends as well. I’m also overjoyed that all the cats used in Keanu were adopted. Perhaps Keanu will make way for more real cats to be used in films, and perhaps someday they can help repair cats’ purr-loined reputation.

Renée Camus is obviously a huge cat person, currently living with two of them (one of whom sat on her lap while she wrote this article) in Burbank, CA. She’s a pop culture junkie who’s written for Los Angeles Times, Los Angeles magazine, LA Weekly, Reel Life with Jane, Moviefone, Mashable, and Playboy, among others. She also writes about pop and geek culture on her blog at Geek Adjacent. Follow her on The Twitters at @camusr6. 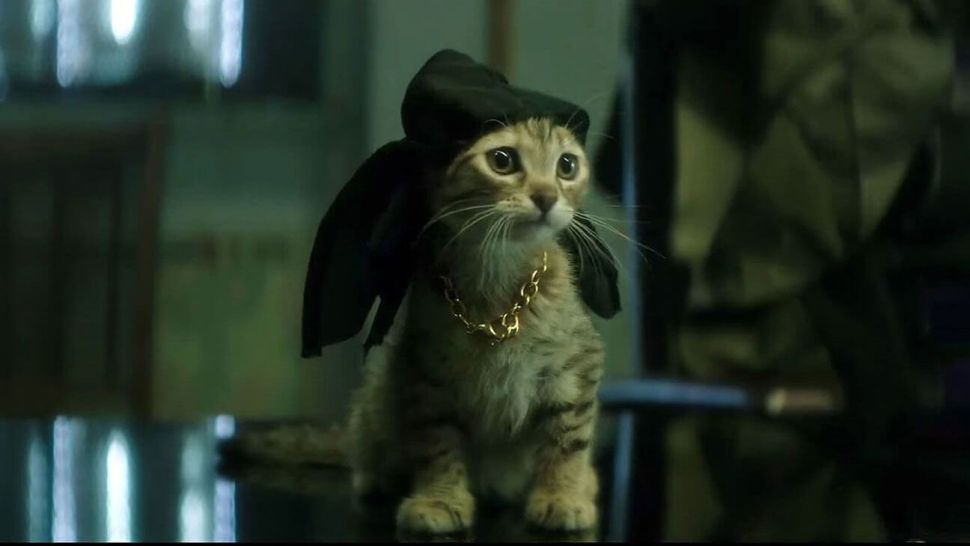