In a season in which SVU has used episodes to explore the topics of transgender-ism, police shootings, and abuse in the Catholic Church, the latest episode, while certainly not lightweight in terms of substance, definitely stepped back from this type of intense examination. But for good reason.

When young model Sally goes to a fashion shoot with famous photographer Alvin, he rapes her while his female assistant, Nora, takes photos of the assault. Part of a highly successful and sought after fashion empire that includes his brother Benno, and Benno’s wife Claire, Alvin smugly insists that the Sally came on to him and that the sex was consensual.

As the detectives investigate, they learn that Alvin has been doing this for years but that most models are too scared to speak up, fearing retaliation that will threaten their livelihood.

Sally’s possessive boyfriend/manager, Matt, who clearly is abusing her, flip-flops between wanting to “put a cap” in Alvin and hoping to benefit from Sally’s assault in some way.

After some legal twists and turns, a payout from Benno to Matt, and Benno making Sally the star of his runway show, at said runway show, Alvin is shot in the gonads in an alley while having a cigarette.

Clearly, there are plenty of suspects – Sally, Matt, Nora, who’s been abandoned by the fashion tycoons, and plenty of models who have been Alvin’s victims.

Using footage from the alley, and some personal experience, Benson and Dodds surmise that it was Benno, tired of having to clean up after Alvin, who pulled the trigger. But, when Claire jumps in to say she did it, the identity of the actual culprit gets a little murky.

A quick conversation in the last scene reveals that Benno took a plea for the crime. This last bit of information was revealed by Sergeant John Munch, in conversation with Lieutenant Benson. Yes, the return of Munch was one of the highlights of this episode. And, what was great about it was that it was done so well.

Seeing Munch return under just about any circumstance would be awesome, but what made his appearance so believable and satisfying here was that it felt so organic. Fittingly, he came back to help with a case, and not a high profile one at that; just something he’d worked on during his tenure with the squad.

And, what really stood out was there was no hugging or anyone saying, ‘good to see you, John,’ which makes it feel as though these people still keep in regular contact with one another even though their careers have caused a shift in such a way that they don’t see each other every day anymore. That felt very true to these characters and the relationships that they’ve built.

Sadly, as (the all too cute) Noah said, we all have to say, “Bye Munch,” at least for now.

With regard to the case at the centerpiece of this episode, while there wasn’t an in-depth exploration of a ‘ripped from the headlines’ topical issue, what was highlighted is something that has gone on for years, and continues to be a problem in the fashion industry – those in power taking advantage of young women who dream of making it in an extremely competitive business.

Actually, this is something that happens in nearly every industry; situations where   those in power bank on the ambition and silence of their victims to keep their horrible, and often illegal, deeds from becoming known.

With this underlying theme, a story like this can be told a thousand different ways and it’s always believable, disturbing and disgusting all at the same time. What’s really sad is that it’s kind of not shocking anymore because there is the awareness that this kind of assault happens all the time. That’s why even if there are a hundred episodes about this topic, all are relevant and necessary.

While all of the elements of a classic SVU were present in this episode, there weren’t any of that ‘thrill’ factor fans have come to cling to in recent years — none of the detectives were in imminent danger, the shock value of the crime wasn’t exactly high, and the resolution was tidy (and a bit slim). This isn’t a slight on this episode; it’s simply an observation about a shift in expectations that’s occurred over the years.

Another element of that shift is that viewers seem to have come to expect a certain expansion of character traits, continuity, and revelation – Rollins, Benson, Carisi and the kids hanging out at the carousel is utterly believable, Barba and his (almost giggly) use of the word ‘pecker’ feels true to his nature, Munch referring to Dodds as ‘new new guy’ is a perfect Munch observation, and Dodds admissions about his brother was both appropriate in timing and relevancy. (Could this be a bit of foreshadowing? Just sayin’…)

With the season finale just around the corner, a two-parter that’s being touted as highly emotional, an episode like this, that’s not too much of an upheaval with just the right amount of forward movement, should be seen as a welcome palate cleanser, before the heaping helping of the heavy stuff that’s sure to come. 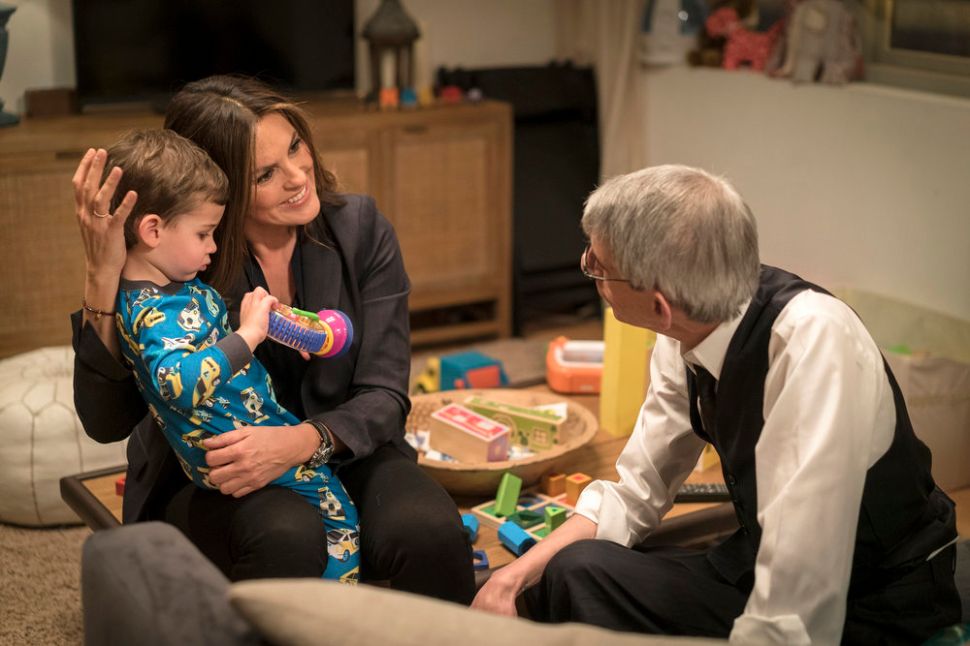