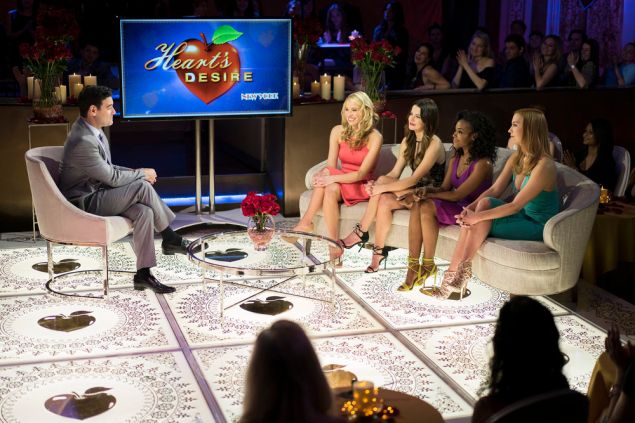 Most times you watch SVU you don’t need to check your sense of reality at the door. In fact, the series prides itself on exploring very real issues in nearly every episode.

While that was the case here, in that there was an actual sexual assault, it was wrapped in a faux reality package that was really anything but real. Confused? Well that’s understandable, but just wait, it gets even more complex as the story unfolds, and that’s exactly the way it was meant to be.

In SVU’s homage to The Bachelor a fictional reality series entitled Hearts Desire featured several man and women living together in a house all hoping to find a soulmate – or at least someone to hook up on their way to ‘winning’ the show and becoming famous.

In a supposedly live show featuring the ladies talking about the men, two long-haired beauties, Melanie and Gigi, gush about a dude named Ryan that they both say they’re falling in love with.

When dark, grainy footage aired on the show reveals Melanie in bed with Ryan on top of her, she jumps to her feet and proclaims that she doesn’t remember any of it and that Ryan raped her. Dun, dun, dun – dramatic cut to commercial! – on the fake series that is!

Rollins, having seen the episode as it airs, convinces the rest of the squad that they should get involved.

When the team talks to the creators of the series, Jeffrey and Regina Prince, a hands-on producer named Lizzie, and Ryan, they get some confusing information and responses – Lizzie shows them footage of Melanie the morning after the alleged incident and Melanie doesn’t mention the assault at all, the Princes act shocked that this could have happened and insist they want to get to the bottom of it, and Ryan of course vehemently denies any involvement in the assault.

Gigi comes forward and says that Ryan left Melanie after she passed out and that she and Ryan spent the night together, so he couldn’t have raped Melanie. (True love apparently involves providing an alibi for someone.)

Suddenly, Lizzie and the Princes find ‘mislabeled’ footage that supports this version of the events. The footage also uncovers the real culprit – another fellow in the house named Graham.

In another episode of Hearts Desire, the Princes show how ‘they’ ‘figured out’ who the real culprit was – airing footage of Melanie taken in a hotel room, and footage of the SVU team as well, shot with hidden cameras right in the squad room.

As the Princes maintain that it was Lizzie who knew about the rape and worked to cover it up for dramatic effect on the show, the detectives swoop in and get Lizzie to work with them to set up the Princes. Using a hidden camera, Lizzie gets the Princes to admit everything they knew.

When Benson and Barba tell Jeffrey and Regina that they’re facing two felony counts, including one that will get them on the sex offender registry, the pair deal it down to a single felony. Lizzie realizes that her time on the series has come to an end, but tells Rollins and Carisi that due to the popularity of Hearts Desire, it will continue on for sure.

Melanie, who lost her virginity to a rapist, and gained an STD in the process, admits that she really thought she was in love with Ryan and that they would live happily ever after. After Momma Bear Benson consoles her a bit, Melanie leaves with her real mom to head back to the Midwest and most likely a place where reality isn’t a TV show but actual real life.

While no one would seriously ever call this, or any, episode of SVU fun, this one might just fall a little bit into the ‘campy’ category. That doesn’t mean it wasn’t relevant and actually meaningful, it just wasn’t as dark and gut wrenching as other episodes have been. But, having said that, what actually happened wasn’t too far out of the realm of possibility of what could happen in a situation like this, and that’s pretty scary when you think about it

In every one of these reality romance shows, there is alcohol, people are scantily clad, and it’s a little unsettling that everyone of these individuals know that there are cameras following their every move and yet they still do things in front of those cameras that they most likely wouldn’t do in front of nearly anyone else, much less millions of other people.

And, let’s not forget the pressure. On each of these series, the participants are all eager to make a lasting impression on the bachelor or bachelorette. Everyone who’s ever seen even five minutes of an episode has no doubt witnessed some individual doing something outrageous to show how much he or she care about this person that 25 other people are pursuing, all in the name of ‘love.’

Put all that together and you have some very volatile situations just waiting to happen. Could things possibly go too far at some point? The terrible answer is yes.

Let’s hope that nothing like what happened on the fictional Hearts Desire ever happens on a ‘real’ reality series. (Is that phrase actually a big misnomer? This whole ‘reality’ thing is just so confusing – which is preciously the point being made here, and on this episode, so there you go.)

There was some intriguing storytelling in this installment of SVU as well in that at several junctures it was really hard to know who was telling the ‘truth’ about what, mostly because it’s pretty clear that on reality shows everyone involved has their own ‘truth’ about what they’re doing, and willing to do, to ‘win’ the series.

It was obvious that the audience was supposed to question whether Melanie was really raped or if she was making it up to get attention. One might have almost hoped that she was making it up because actually being raped is far more traumatic and life-changing than simply being a delusional person who would make something like that up for any reason at all. Obviously, it was incredibly sad that Melanie was actually assaulted and as is true to its nature, SVU didn’t shy away from the fact that no matter what the circumstances are, rape is rape and the after effects of it are life altering.

On a lighter note, kudos to the SVU writers for cramming the episode with so many reality show clichés in appropriate fashion (this is what made it slightly campy) – the hot tub, the multi-level swanky abode, night vision cameras, two women named Ashley (Ashley S. and Ashley B!), the dude in the tank top and flip-flops (he was non-speaking but none-the-less on point) and even a good old cat fight (I can just hear what transpired in the writers room – ‘we can’t have a reality show without a catfight. We gotta get that in act three!’) But, it must be pointed out that what was missing was Gigi saying that tried and true statement that is uttered on nearly every reality show at some point — “I’m not here to make friends.” Let’s assume that was intended but, in an almost funny twist, ended up on the cutting room floor.

It was also nice that they used the Hearts Desire series to tell the SVU audience a little bit more about the members of SVU squad – Rollins and Carisi watch the show while Benson and Tucker would rather have the TV off, Rollins and Carisi are hanging out together a lot while Benson and Tucker are still going to bars quite a bit (although she looked to be having some coffee instead of vino), and that this may be changing as Tucker suggested a night of ordering in. The only thing missing was a few more Fin zingers about his take on the whole dating-reality genre.

While this episode took some liberties in telling this story (no network would air footage of the anyone, let alone the NYPD, without signed release forms, among other things), the overall intention and execution of it was interesting, entertaining and effective, but the thing to remember here is that every bit of it — the show within a show and the actual show itself  — is all fictional, but it sure was a good story, wasn’t it? 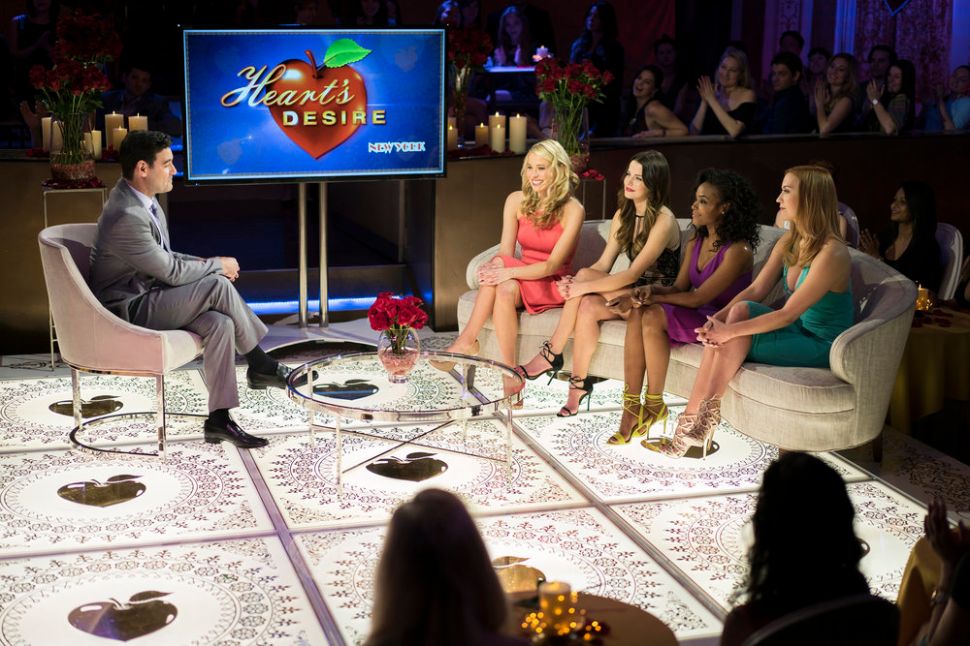