With one final installment, season 17 of SVU has come to a close – but not without a bit of shock and awe, something that has become somewhat of an SVU signature in recent years, particularly, say, the last five.

This episode featured part two of last week’s storyline (hmmmm, a continuing storyline – something also rather new in the Law & Order universe), as Rikers corrections officer Gary Munson was indicted on numerous counts of rape after several inmates testified before a grand jury that he’d repeatedly assaulted them.

When he was initially being arrested, Sergeant Benson encouraged his wife, who was standing by him at the time, to take a real look at her husband and their relationship. Benson also urged the woman to get tested for sexual transmitted diseases.

While Munson was being arraigned, his wife, Lisa, confides in Benson that after receiving the results of her STD tests, she’s ready to take her two children and leave Gary. Benson suggests she do it while Gary is still in custody.

Back in the squad room, Benson receives a call from Lisa that Gary made bail too quickly for her to gather her kids, her things, and leave. Lisa, fearful of Gary, calls Benson for help in getting out of the house.

Benson interrupts the going away party for the departing Sergeant Mike Dodds (he’s leaving to join the Joint Terrorism Task Force) to tell her squad that they need to do a ‘clothes job,’ which means making sure a victim of domestic violence gets out of the house safely.

Both Carisi and Fin offer to go on the call since it’s Dodds’ last day, but he opts to accompany Benson to the Munson home to help out.

Once inside the house, it’s clear that Gary is not going to let this happen without a fight and as Benson escorts the two small kids out to the car, he pulls out a gun, holding both his wife and Dodds hostage.

When Benson can’t get back in the house, she calls for backup and her team, as well her boss, Dodds, Sr., show up. When Dodds Jr seizes an opportunity to grab Munson’s gun, shots ring out and the younger Dodds sustains a bullet wound.

At the hospital, he makes it through surgery (but doesn’t look good after, that’s for sure!) and everyone thinks he’s going to be ok, particularly the elder Dodds. A bit later, Benson notices that Mike is slurring his words and having trouble speaking. She asks a nurse to consult his doctor who comes back with grim news.

When Dodds Sr. explains to Benson that the doctor says that his son has experienced a brain bleed and will not recover, he breaks down in her arms. Benson in turn, doesn’t have to say a word to her team; simply giving them a look that they know unmistakably means tragedy has befallen their squad.

Following his death, a full-scale funeral and Irish wake at a bar allow Dodds’ brothers in blue to pay tribute to their fallen comrade.

Benson, feeling excessive guilt over Dodds death, reaches out to her therapist for help in dealing with her emotions.

In a final poignant scene, Ed and Olivia, strolling waterside with little Noah in tow, discuss their relationship. Ed tells Olivia that he’s put in for a transfer to the hostage negotiations team, revealing the real reason he ended up in IAB in the first place and pointing to his newfound trust in her as the reason for the change. The pair also agrees that they’re pleased with the progression of their relationship – that they like what they have going and they both feel they’re headed in the right direction.

The episode ends on a positive note as Ed suggests that they take a trip together, to Paris, a city that Olivia has mentioned in the past that she’d like to visit.

It was a sweet way to bring closure to an installment that was tension-filled from the opening moments. And, that scene featured a slight red-herring as Ed dropped to one knee, seemingly to pop the question to Olivia, but instead was simply focusing his attention on Noah for a brief moment.

That wasn’t the only misleader in this episode, which also contained a storyline in which ADA Barba was being threatened by not only some police union folks but by some unknown thugs as well. This was perfect plotting as it added to the, “who ends up getting hurt and just how badly?” question that lingered throughout the episode. Way to go on the part of the SVU writers to put everyone in danger and keep the story moving so that at every turn there was drama and confusing about how things would end up.

Great callbacks in this episode as well – to the “Community Policing” episode, to “Townhouse Incident” – did Ed decide to transfer to hostage negotiations after the role he played in getting Olivia safely out of that situation, and to Fin, telling Dodds Jr. that the Joint Terrorism team is where you can get killed. The irony of Fin’s statement is perfect, given what happens here.

Now that’s how you lay threads and then have them pay off over time. That’s how you tie a season together in its final moments.

I have to admit that I knew things were going to end poorly for someone in this finale, when, back in April, as I spoke to Warren Leight one day he simply said, “You should come out to location tomorrow. We’re shooting the big funeral scene.”

There it was, the one word that has no other meaning – funeral. Right in that moment, I knew that someone was going down.

At the time, he didn’t tell me who would be in the casket, but the next day when I watched that cadre of uniformed officers on the steps of the church, I surmised who it was, and both Leight and Julie Martin confirmed my suspicions slightly thereafter.

Leight explained the decision to kill off Mike Dodds, saying, “We thought a lot about it and I’ve never killed a main character on a show before, but it really seemed the way to go here. I really tried to arc out everyone who left the show during my tenure in a reasonable and believable way, but in this case, I thought if Dodds is going to leave this team that’s come to embrace him in their own unique way, then I want him carried out by his fellow officers…. and really his fellow cast members.”

In addition, the showrunner, who’s also leaving the series, wanted to plant just a few seeds for the incoming creative team, explaining, “There’s going to be a lot of aftermath to deal with going forward. There’s a hole in the squad. Even if Dodds was only with the team for a short while, they’ll still feel the loss for awhile.”

The actual storyline in this episode came from a very real place, says Leight, “Sometimes you read about [an officer] who gets killed on their last day on the job, maybe you’re thinking, ‘I’ve handled this type of situation before, I know what I’m doing,’ but then you slightly drop your guard and things go south in a hurry.”

The death of an officer was also unique to the series, but highlights an aspect of police work that should never be overlooked, says Leight. “We haven’t had one of our SVU guys killed in the line of duty, but it’s a very real possibility every day in any police dept. Domestic violence calls are extremely dangerous and we’ve shown that before, but never in this way.”

Martin, who is already back in the writers room with the rest of the new SVU writing staff, says that she wants fans to take away a few things from season 17. “The first thing is that life is change and change happens no matter what. It can be painful but it can also be unexpectedly joyous. I also want people to continue to see that the inherent message of the show is that despite the horrible crimes that are out there and the terrible things that people do to one another, for all the sadness and pain that there is, there is power in survival. That’s the message of the show. We show the bad things but we like to shine a light on the hope that things can change and to keep looking forward.”

For those concerned about Leight’s departure, Martin offers this – “I want to reassure everyone that I’m still here as is the majority of the writing staff. We’ll miss Warren very much but the mandate from everyone is that the show is functioning beautifully so we plan to continue on the path that we’ve been on for the past five seasons – highlighting current issues while delving deeper into the lives of our characters. We’ll continue right down the road that we’ve been on. Our intention is just to make the show stronger.”

She reiterates these sentiments by adding, “I just want to reassure people that everything that they love about the show, what’s been happening the last five years – with the kind of storytelling that we’ve been doing, the way the show has been shot and way the actors have played their roles – no one is interested in making major changes to any of it. It’s just a passing of the baton. It will be different, but the foundation will stay the same.”

Plenty more commentary could be offered about this episode – especially the tight-knit plotting that made the entire installment move at such a rapid pace, the use of extended silence and subtle music cues to convey heightened emotion when words wouldn’t suffice to do so, the precise editing (by Karen Stern, herself a 17 year SVU vet!), the layered performances of all the series regulars, as well as those of Andy Karl, Peter Gallagher and Brad Garrett – but sometimes it’s best to leave an entity just as is, so that people can enjoy and interpret the episode as they feel best.

So, apropos of this season of SVU, it’s time to digest all that’s occurred in the past year and move on, because change is going to happen no matter what. We can only hope that we grow because of it, and it seems in this instance that we have.

We’ll say goodbye to SVU now, but thankfully just for a little while, as season 18 will be here before we know it. 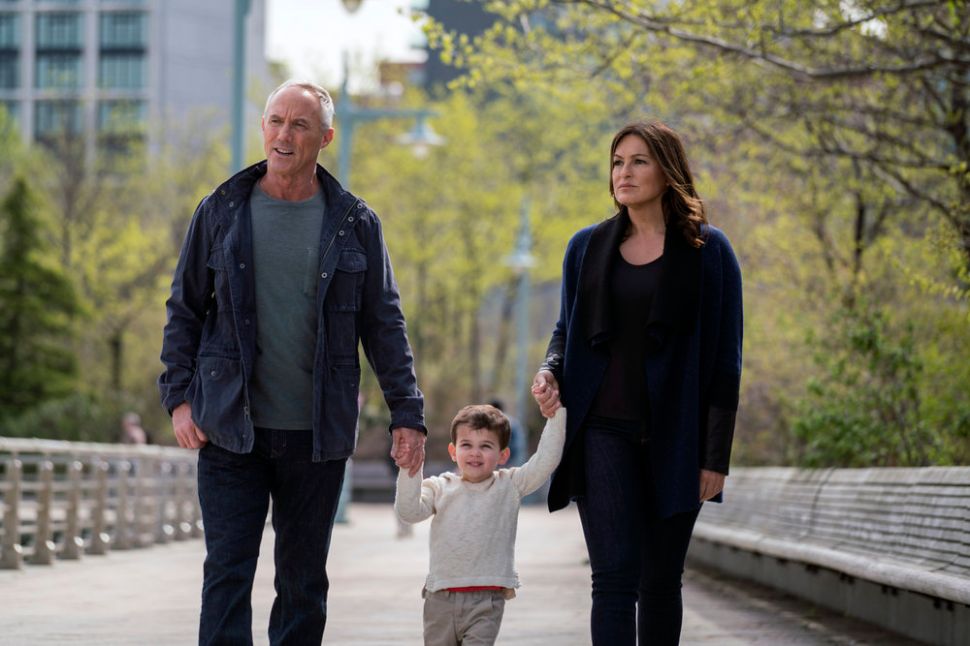