This election season, no political position has been more bludgeoned by both left and right than support for international trade deals. Fearing the crosscurrents, Hillary Clinton has hedged and triangulated. But her reaction has been precisely the opposite of what it should be: in the age of the angry tweet and simple slogan, Hillary’s position on trade is too nuanced. She should be the pro-trade candidate.

Donald Trump and Bernie Sanders both have made political hay across the heartland decrying NAFTA and the Trans-Pacific Partnership (TPP). End free trade, they say, and bring back our manufacturing jobs.

The reality says otherwise. Thomas Friedman points out we’ve added 900,000 manufacturing jobs in the U.S. since 2010. Fareed Zakaria observes in The Washington Post that no opposition to free trade would put the low-wage foreign labor genie–or the digital economy–back in the bottle. And practically no credentialed economists deem trade deals as bad for most Americans.

But Ms. Clinton, rather than stick to her erstwhile support for free trade, including TPP, has instead let herself blow with the political winds, and is trying to claim she was never really for it. She even trumpets the need to renegotiate NAFTA, a crowning achievement of husband Bill as president.

Bitterness should not lead us to throw out the baby with the bathwater–on trade, or any other issue.

Her calculus has been to show more empathy for the workers victimized by international trade. Earlier this month, Ms. Clinton went on a whistle-stop tour of Appalachia to listen to displaced coal workers and others left behind by globalization. She even recently suggested that under her administration, husband Bill could become the nation’s jobs czar to help economically depressed areas. And she has admirably embraced policies from worker retraining to infrastructure investment to address trade’s Achilles heel, seldom fully acknowledged by its proponents: the needs of the disenfranchised and displaced workers. Hillary’s manufacturing plan seeks to stanch the ills trade exacerbates such as the offshoring of jobs, lowering of wages, weakening of environmental and labor standards, and worsening of income inequality.

The problem, however, isn’t her policy details, but that her message lacks simplicity and enthusiasm. Justin Trudeau was elected prime minister in Canada last fall promising a return to “sunny ways”; Donald Trump has coasted to the Republican nomination on the ubiquitous slogan, “Make America great again.” On trade as with everything else political, gloom and detail don’t sell. And in stomping on free trade, Donald and Bernie have handed Hillary a golden ticket to go positive and differentiate herself: embrace free trade optimism.

While the details of trade deals are messy, free trade’s logic is simple: (1) Selling to international buyers creates demand for American products, creating jobs. (2) A free global market makes everything we buy cheaper. (3) Commonsense adjustments to trade policy can make trade fairer and a winner for America’s Main Street. Following President Obama’s lead and eschewing the tortuous evolution of her views on free trade, Ms. Clinton needs to embrace these straightforward and optimistic messages to connect with a disaffected American populace.

Ironically, the former Secretary of State has made most of these arguments publicly, even in print. But her reticence on trade writ large–missing among the 31 profiled issues on her campaign website–is puzzling.

While the need to trot out arguments in favor of international trade would befuddle a time traveler from the 1990s – or even 2010, when President Obama set out to double exports in five years–our times dictate this wisdom be dusted off on the campaign trial. A hefty White House policy paper on trade’s benefits last year and a basic primer lay out the arguments simply and clearly. In short, many global benefits ushered in by the post-World War II era– cheap technology and consumer goods, American political and economic hegemony, low pollution, women in the workplace, peace and prosperity–have roots in free trade.

It’s also a mistake to pin so much of what ails the middle class on trade deals rather than on the transformation of the global economy, something Ms. Clinton has declined to emphasize. Efforts to demonize NAFTA and TPP miss the point that we have failed to tend our own garden on international trade: time and again since the NAFTA ‘90s, our leaders have missed chances to structure tax incentives to create jobs and keep companies in the U.S., invest in our crumbling infrastructure, revitalize the Rust Belt and Appalachia, and ensure multinational corporations share trade’s gains with taxpayers, particularly those who suffer from its economic dislocations. In short, the policies Hillary already supports can be spun to show angry blue collar workers that she has a winning economic plan for them built on trade.

The trade and corporate rules that are broken need to fixed. But the message should be, “Trade done right.” Rather than focus on her strong plans, Ms. Clinton has chased after problems, some of them illusory. For example, Ms. Clinton has embraced Donald Trump’s rhetoric about Chinese currency manipulation, even though China’s currency is overvalued rather than undervalued, and U.S. policies following the 2008 financial crisis mirror those being pursued in Asia now.

A “pro-fair trade” message would push Ms. Clinton back to stronger ground with her detailed existing proposals to proactively police global trade. If a few players cheat, should we quit the game or crack down on the cheating? Pursuit of fair play can animate addressing issues such as massive Chinese government support for industries from solar panels to steel and the cut-and-run tactics of employers who have benefitted from government largesse, which Clinton has proposed curtailing through clawback provisions that force companies outsourcing jobs overseas to repay tax benefits.

The sour public mood in the context of extended economic malaise and neglect from the political class is understandable. But bitterness should not lead us to throw out the baby with the bathwater–on trade, or any other issue. To prove she can be a strong commander-in-chief, Hillary needs to seize the bully pulpit and reclaim the narrative on this critical issue. Let’s hope she’s up to the task. 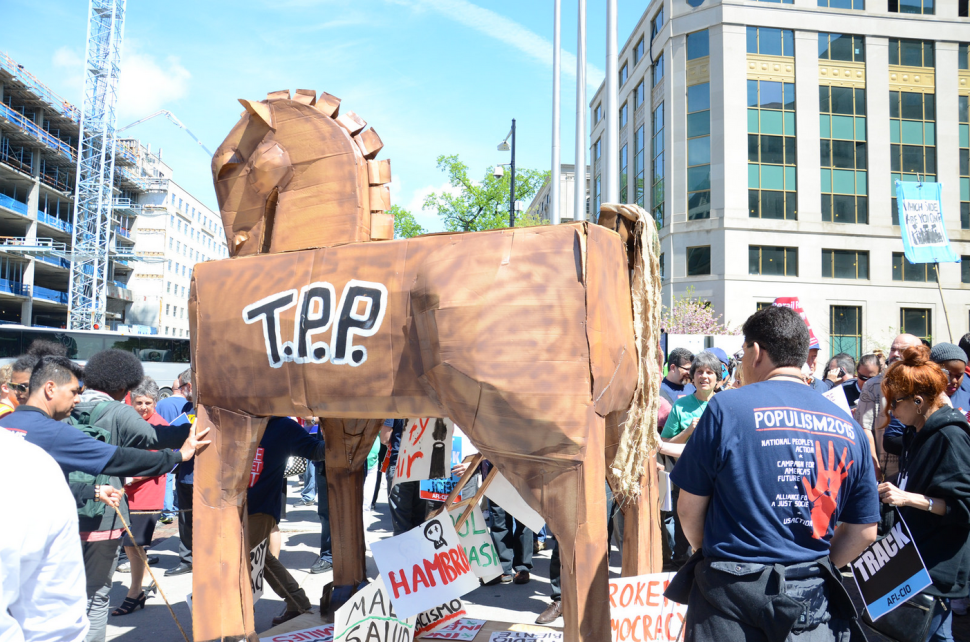