It’s 57 degrees on the last Thursday of April in Hollywood, so of course everyone is talking about how it’s fucking freezing outside. Even those of us who lived in New York for a decade have grown accustomed to L.A.’s typical endless-summer climate and are dressed in layers on this weird spring night. But for those frisky enough for some al fresco frolicking, the rooftop of the Mama Shelter boutique hotel has you covered.

We sit down, sip our za’atar margarita and notice there are tables with revelers wearing straw hats, dressed in white like they’re in Mykonos during the summer but now also covered in blankets, on both sides of us. There is a lot of spontaneous grooving, especially during Prince songs, as those who came to get down enjoy a genre-bending playlist that keeps the pace going while weaving from samba to funk to chart-topping bangers.

Spontaneous is the point here—this isn’t a full-on dance party. People get up and shimmy on their bench or next to their couch for a minute, then sit back down, then get back up again and again. Servers wearing backwards trucker hats and bandanas take quick breaks to rock a few moves to the beat and maybe even do a cartwheel before going back to the kitchen to get more food. This isn’t part of any choreographed show. These dudes are smiling widely and really dancing like nobody’s watching. Because most of the room isn’t paying any attention to anything beyond what’s happening at their own table. There is an eclectic all-ages crowd—even a pre-teen having dinner with her family—enjoying pizza and fruit.

Mama Shelter is an outpost of a French property, but there are no Andre Saraiva doormen letting in their unemployed ‘art-world’ friends and ignoring almost everyone else.

It is relaxed as all get-out here at 10 p.m. on this Thursday night, but probably not as relaxed as the Sunday sunset yoga sessions on the roof when chakra-balancing comes with a side of Hills and skyline views. The staff wear t-shirts that say “Mama Says,” so we ask whether the rooftop is called Mama Says and are told no, it’s all Mama Shelter at the hotel and the shirts are just something they have. Anyway, why sweat the details when you’re in a tropical, brightly hued shabby-chic oasis UrbanDaddy calls “The Best New Rooftop in the City. Period” in the subject line of the e-mail blast for its writeup. And also calls “the finest thing to happen to the sky in a very long time.”

Los Angeles does nightlife well, but this is an early town. Even a place as hotly tipped as Mama Shelter winds down at 11:30 p.m. It’s no secret that Las Vegas is often where the hardest-partying Angelenos go to rage. The places in L.A. with staying power, like the Chateau Marmont patio and spots from the Houston Brothers and 213 Hospitality, are much more chill than what you’ll find on late nights in Vegas or even New York. And Mama Shelter is an outpost of a French property, but there are no Andre Saraiva doormen letting in their unemployed “art-world” friends and ignoring almost everyone else. 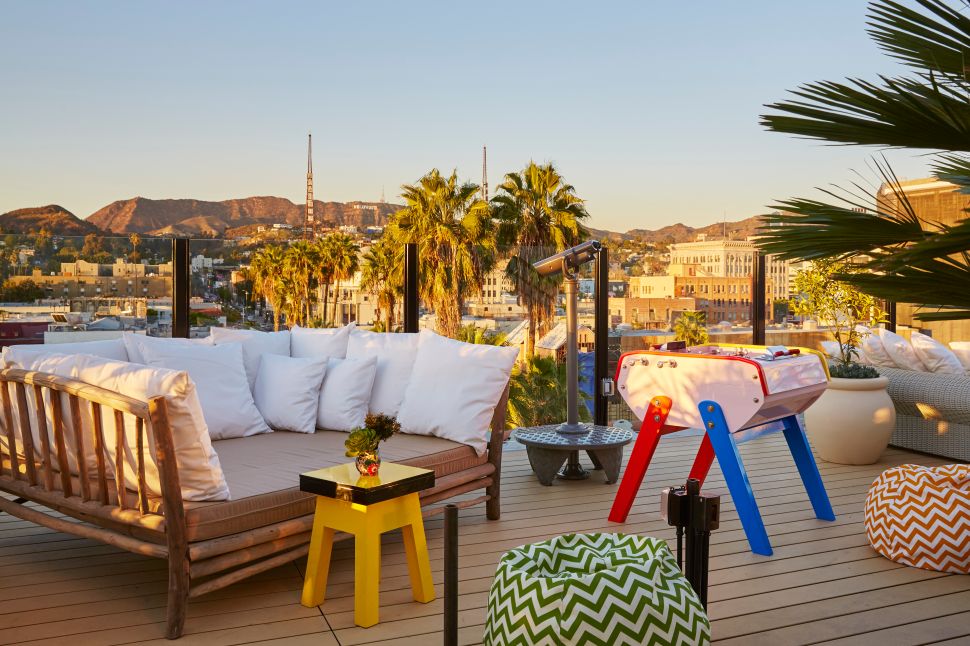