People have an irrational fear of machines; a fear that progress can go too far, that our creations will be the source of our destruction. Dystopian literature panders to this ludditian fear of technology and glorifies the purity of Nature. Machines are described in grotesque, anthropomorphic terminology. They are like humans, they have hearts and brains, but they lack emotion and humanity. They also cause chaos and destruction, as with the robotic Maria’s scheming in Fritz Lang’s Metropolis and Ava’s duplicity in Ex-Machina.

But at the Costume Institute at the Met’s exhibition, “Manus x Machina,” which opens on Thursday, the machine is not a sign of dystopia, but of utopian creation. The exhibition is a reverent exploration into the act of creating beautiful clothes. Unlike previous exhibitions that focused on individuals or thematic trends, this gives a behind-the-scenes look at the processes behind some of the most beautiful clothes ever created.

To say haute couture is synonymous with handmade is a misnomer; machinery has always been an integral part of the process. Because man and machine function not just in tandem; they cannot work without the other. Without machines—from the simple tool of the needle for sewing, to the complex machinery behind 3-D printing—man cannot create. And without man, the machine would lie unused, useless, its metal shell left to corrode and decay. And its this reciprocal relationship that, when laid bare for public consumption in an exhibition, reveals the craft inherent to the creation of clothes. It’s no wonder that fashion aligns well with the speeding trajectory of technology.

Fashion has always been forward-thinking; the system is based on constant change, a never-ending wheel of trends and ideas. And its ability to change came not only on the heels progressive ideology and modern social constructs, but on technology’s rapid progress. The invention of the sewing machine allowed for mass production and standardized sizing; the introduction of techno fabrics ushered in the current rise of athleisure-wear; 3-D printing’s applications are still being explored. Fashion and technology have a symbiotic relationship; a relationship that pushes each other further into the future.

In 1751, Denis Diderot, a French Enlightenment philosopher, wrote a book entitled Encyclopedia, The Arts, Sciences and Crafts, based on his ideas about the importance of labor to society. It was a publication that, although frequently banned throughout his lifetime, for the first time gave fashion and manual labor, “the same status as the Arts and Sciences,” according to Andrew Bolton, the chief curator at the Costume Institute. The encyclopedia explained, through diagrams and detailed commentary, how objects of value in France were produced. It came in handy for people like Madame de Pompadour, Louis XV’s chief mistress, who ignored the ban when she wanted to know how her silk stockings were made. She got the king to give her access to the confiscated volumes and, recorded Voltaire, “She learns how stockings are woven; the stocking-frame described there fills her with amazement. ‘Ah, what a glorious book!’ cried she.”

Diderot believed, due to his upbringing as the son of a master craftsman, that the universe was “a Machine” that cannot work without all elements accounted for. And so all forms of creation, from button-making to coppersmithing, were important and valid. This view became sacrosanct; in France, fashion is still valued as a craft. It is why the center of haute couture lies within Paris, why the French value the creation of fashion more than the average American.

The exhibition opens into a circular room with walls of pure white mesh. The room is filled with the sonorous sounds of hauntingly beautiful music, its pensive melody echoing like a liturgical hymn. In its center is a fall 2014 Chanel wedding gown, sculpted from a scuba knit with an embroidered train that takes up half the room—the piece that inspired the exhibition theme. It is a masterpiece of craft, a piece that took a hand-drawn sketch and used a computer to pixelate the image to create the resulting embroidered design. The gown is surrounded by Diderot’s Encyclopedia, each book opened to another page that details the processes involved in the creation of fashion. Looking up, the ceiling is in the shape of a dome, decorated with a digital projection of the train’s embroidery details. You then are taken to a long, winding pathway around the exhibition’s center, almost like the anteroom of a medieval church, where ensembles are displayed reverently, each piece placed on elevated pedestals within semicircular recesses in the wall, like an apses in a cathedral. Most were bundled into groups, but some pieces were displayed alone, with a digital projection of the dress’s details on the wall behind.

The exhibition is grouped by métier, and so the clothes represent either broderie (embroidery), plumasserie (featherwork), parurier floral (artificial flowers), plissé (pleating), dentelle (lacework) and maroquinerie (leatherwork). Some of the most extraordinary pieces—like three ASFOUR’s nylon mesh and resin 3-D-printed “Bahai” dress, a labyrinth of complex lacework; or the hand-pleated multi-colored stripe haute couture Dior spring 2015 skirt—are accompanied by videos detailing the process, showing the artisans behind the masterpieces at work.

And it’s this emphasis on showing every detail of a dress’s construction that makes this exhibition such a delight. It’s the perfect example of uplifting the mundane to something important, maybe even something that could be termed a “spiritual experience.” And the reverence given to the métiers behind the finished clothes gives us the chance to stop and truly appreciate the effort it takes to conceptualize and to create wearable works of art. It gives the clothes a sense of humanity and emotion. Mr. Bolton agreed, “You look around the exhibition and [even though] some of the clothes you see, which may have been entirely produced by machine, they have a deep emotional connection. And I think people forget that the machine is often operated by human hands, and created by human hands. There is a humanity to the machines and you see that throughout the exhibition.”

In a time where fashion is still derided as a frivolous interest, where its feminine flighty nature is expressed in the constant turnover of trends in the fashion cycle, and adherence to the fashion cycle is branded as slave to one’s vanity, this kind of exhibition is needed more than ever. By showcasing the laborious processes and the complex tools and the dedicated people behind glittering garments and frothy frocks, it humanizes the clothes, giving the fashion meaning beyond the trends of the day. And that meaning allows clothes to become something worthy of cultural attention, to reach the level of art. To, as Mr. Bolton said, “appreciate the artist behind it and the artistry that goes into it.” This exhibition might even make a viewer gasp in delight, declaring, “Ah, what a glorious exhibition!” 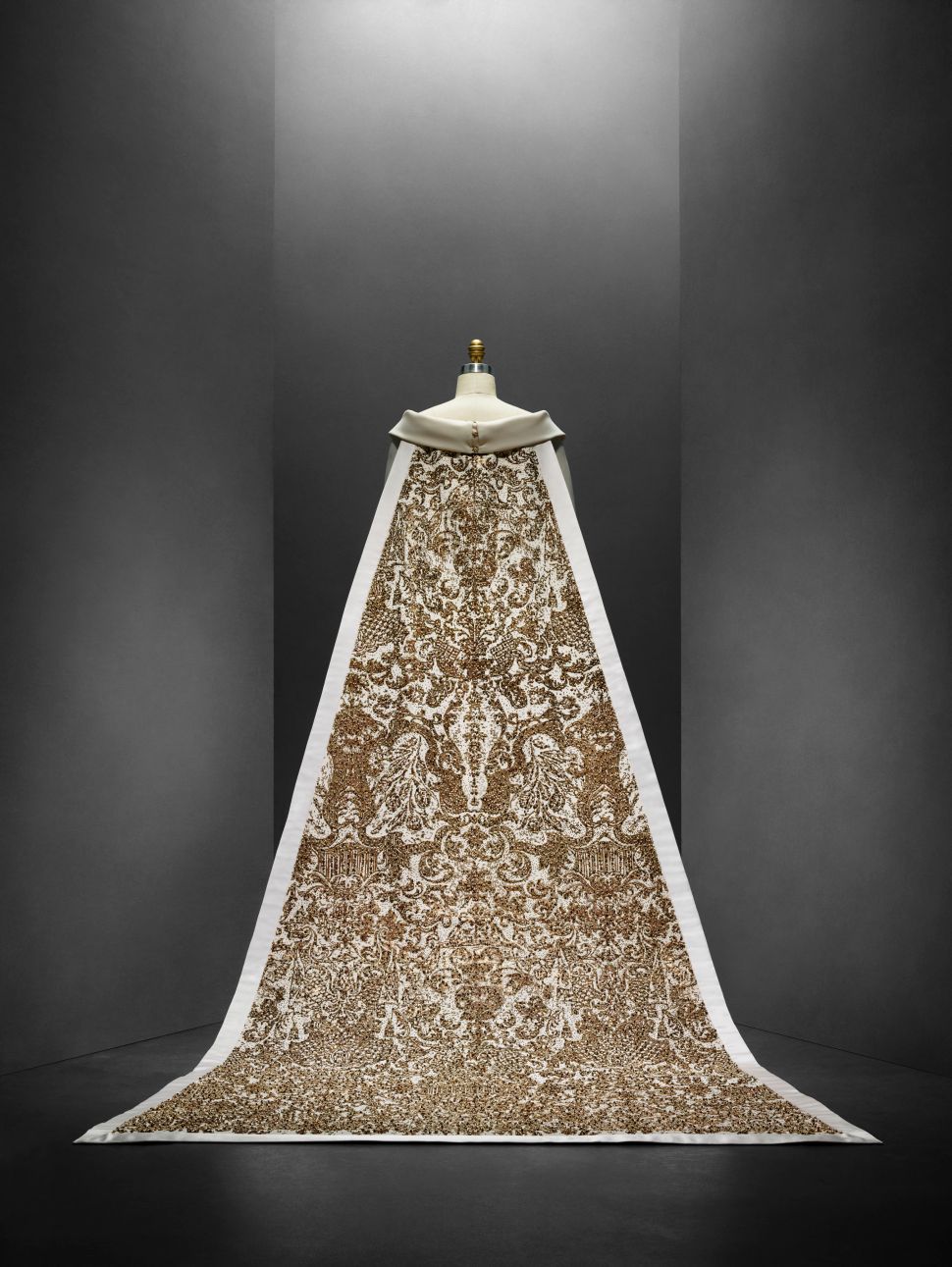