Earlier today, Mark Zuckerberg and wife Priscilla Chan announced they’ve hired Jim Shelton, current president of online master’s education provider 2U, to head up education efforts for the Chan Zuckerberg Initiative. The three later jumped on a Facebook live video that streamed from Mr. Zuckerberg’s profile to discuss the launch of the education initiative, among other things.

During the 45 minute video that was watched by more than 1.4 million users, the trio answered questions from the comments. Things got interesting when it came to a question from New York Times reporter Mike Isaac. The question, addressed to Mr. Zuckerberg and Ms. Chan, asked what school subjects were their worst/the hardest for them and if there was a teacher who that helped them through it.

Ms. Chan began with an anecdote about ninth grade English class before declaring that there is a “worse subject that comes up on a regular basis.” She said that she has never been good at music, and immediately, Mr. Zuckerberg interrupted, “that is true.” He added that everyone on the Zuckerberg side of family has perfect pitch, and then he dropped this truth bomb.

“We have some rules around who can sing to Max because we want to make sure she grows up with perfect Zuckerberg Pitch,” Mr. Zuckerberg said.

Although everyone was laughing, Ms. Chan’s face leads us to believe this is in fact a real rule. You can see them discussing it about 40 minutes into the video.

When the video first began, Mr. Zuckerberg joked that this was the first and possibly the last live video he and his wife would do together, depending on how it goes.

“You can’t take back anything you say on this,” she replied. 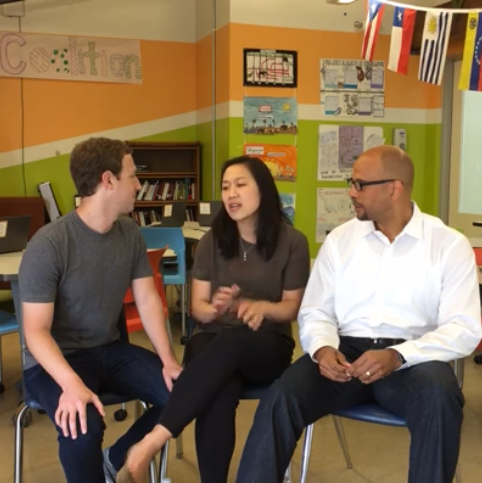