Who says the cast of The Big Bang Theory doesn’t know any science?

Mayim Bialik has played neurobiologist Amy Farrah Fowler on the hugely successful CBS series for several seasons now. But it might surprise some people to know Bialik is, in real life, an actual neuroscientist who earned her PhD from UCLA in 2008.

Bialik is ecstatic about any influence that she, and her character on TBBT, has on young women considering entering a STEM (science, technology, engineering, and math) field. “I’m really proud that I’m working a show that highlights women in this way,” says Bialik. She goes on to talk a little more about Amy’s relationship to Bernadette Rostenkowski-Wolowitz (played by Melissa Rauch), another female microbiologist in the series.

“Sometimes our show is criticized for stereotyping women in a certain way but I think it’s interesting in that we show two really different kinds of females, both of whom are successful as scientists. Bernadette is more of an adorned character than Amy, but they’re both very well-rounded and unique in their own way,” explained Bialik.

“I generally wear bigger clothes as Amy because I don’t think there’s anything wrong with showing a character that has a normal body.”

In a further effort to inspire women, Bialik launched the website GrokNation in 2015. The site, which caters to women, includes insight on such wide-ranging topics such as religion, pop culture, parenting, and Hollywood.

When we spoke at a recent event, Bialik said she feels the audience knows a lot about her character. What she really wants people to know is the conscious efforts she makes to make Amy look a certain way. “To me that’s important. I generally wear bigger clothes as Amy because I don’t think there’s anything wrong with showing a character that has a normal body. I have what’s considered a normal body.”

She laughed a little as she said, “By Hollywood standards I’m the fattest woman [on this red carpet.] Then she went on to say, “It’s a conscious decision that I make to not have Amy be sexy and not wear Spanx and push-up bras and false eyelashes. I know a lot of female scientists from my time in college and grad school who were respected for their brain and who didn’t have to compete on a physical level and I like that a lot in this character.”

“I likened my joining [during season 3] to entering your senior year of high school three weeks into the semester – everyone knows where they sit at lunch and everyone has their locker picked out.”

Joining the series in its third season was a bit tricky for the actress, admits Bialik.

“There was a lot of adjusting in that the rest of the cast had three seasons under their belt. I likened my joining at that time to entering your senior year of high school three weeks into the semester – everyone knows where they sit at lunch and everyone has their locker picked out. But it’s like anything new, after some initial awkwardness you settle in.”

Of her relationship with her co-workers now, Bialik says, “It’s really great. We all love what we’re doing and want to keep doing it.” She adds, “It’s really just so interesting and fun and inspiring to play these characters because they’re all growing and changing all the time. It’s very much like real life and we’re all very proud of that. Our real hope is people will continue to come back week after week and join us in this continuing adventure.”

The Big Bang Theory’s season nine finale airs Thursday night at 8/7c on CBS.  The series has been renewed for a tenth season. 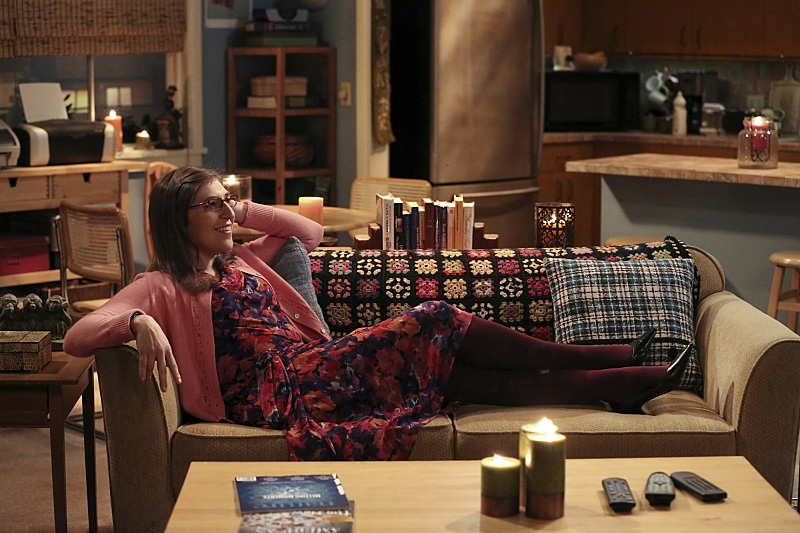