As she rolled out $20 million plan to boost the lives of women and girls in New York City, Council Speaker Melissa Mark-Viverito said today she hoped to see more of them working in the City Council.

“We need to challenge anyone that has a role to play in supporting candidates to make sure that we are creating pathways of opportunity for young women in government,” Ms. Mark-Viverito said on the steps of City Hall. “It is, to me, unconscionable that in this City of New York, that serves as a model for many other cities, that out of the 51 council members, only 14 women are here. We need to change that dynamic.”

The number of women in the council actually dropped from 15 to 14 in recent months with the retirement of Maria Carmen del Arroyo, whose seat was won by Rafael Salamanca—and as Gotham Gazette noted late last year, of the eight members facing term limits in 2017, five, including Ms. Mark-Viverito, are women.

“While we have many men that are true partners with us in this struggle, we need government to be reflective on the gender side as well as racially and ethnically of the reality that we live,” Ms. Mark-Viverito said today.

Councilwoman Julissa Ferreras, who chairs the powerful Finance Committee, said that the report released today—The Young Women’s Initiative—is the example of the kind of things that happen when a woman is in elected office.

“Whenever we thought for a second that it really doesn’t make a different that a woman is in power, Melissa is in our face to remind us that yes it does make a difference,” Ms. Ferreras said. “I’m honored to be able to be the finance chair, but the reality is that it took a woman to make that decision.”

Amanda Matos, a co-chair of the Young Women’s Advisory Council, said growing up she didn’t see many people like her in government.

“In my experience growing up as a young Puerto Rican woman from the Bronx, I did not see myself or my experiences reflected in leadership,” Ms. Matos said, standing alongside Ms. Mark-Viverito, the city’s first Puerto Rican council speaker and top Latina elected official. “And now this is shifting and I’m thrilled to be part of this shift.”

She praised the work of the Young Women’s Advisory Council, but said that their advocacy needed to reach everyone.

“All young women and girls of color need to have the same access to resources,” she said. “It can’t just be us—it needs to be all of us.”

The Initiative is modeled after President Barack Obama’s My Brother’s Keeper initiative for young men and the city’s Young Men’s Initiative—and will be funded with $20 million in City Council and private philanthropic funds to pursue recommendations like hiring more guidance counselors in school, expanding the Nurse-Family Partnership program, and requiring city agencies to have “gender equity liaisons.”

“It is a shame that it hasn’t happened sooner, but it was out of the advocates and philanthropy that was saying, ‘Well, there’s all this focus on young men of color which is important and needed, but we also need to focus on young women,'” Ms. Mark-Viverito said.

Joanne N. Smith, founder of Girls for Gender Equity, was more blunt about why young women’s issues seemed to take a backseat in the national discussion to men’s issues. 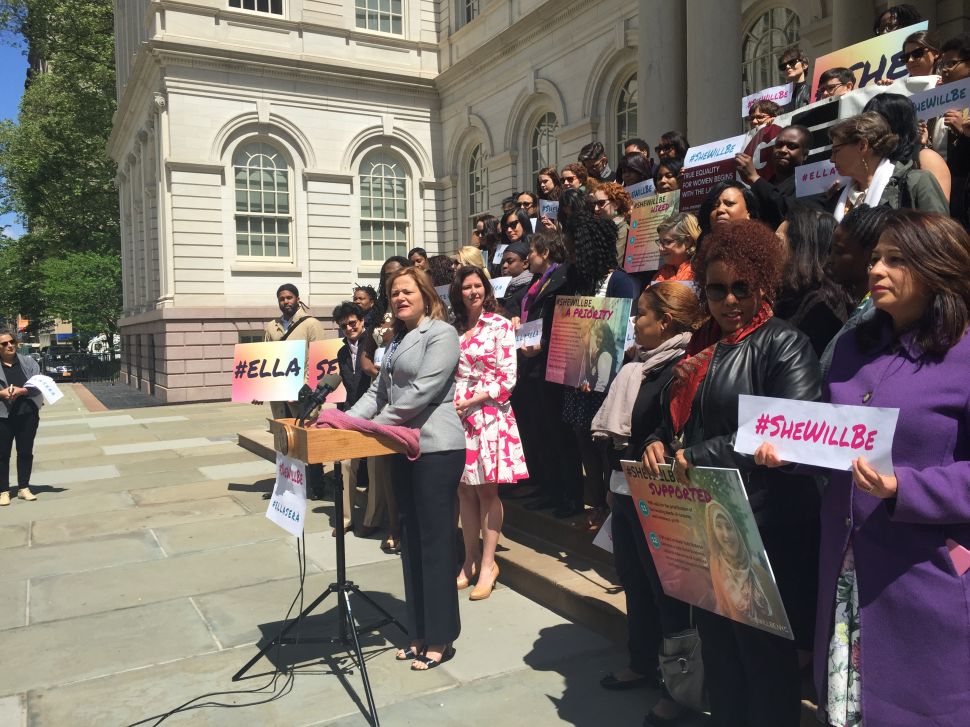