It all started with a sweater. Not just any sweater but the one knitted on the Faroe Islands and worn by Sarah Lund in the cult Danish TV drama, The Killing. With its interlinking bands of geometric diamonds encircling body and arms, this gray and white knit was simultaneously homespun and fashion forward, like slippers made by Philippe Stark. It was a sweater that could have come from an avant-garde fashion house such as Comme des Garçons or Alexander McQueen. Instead it was handmade by knitting crofters on a remote archipelago of islands halfway between Norway and Iceland.

No single garment has ever summed up so instantly the particular appeal of this (very) Northern European style: practical, comfortable, easy but with a design edge. The Lund sweater may have been worn by a woman, but it was men who loved it the most, a kind of boyfriend cardigan in reverse. For it seems all men covet a snug, graphically bold sweater—it is such an easy way to make a style statement.

“Men also love function,” said Teo van den Broeke, style director at British Esquire. “Where Maximalism is the byword in high fashion right now, in mid-level menswear it’s all about desirable but hard-wearing utility wear.” Utility is a byword at Danish knitwear label, SNS Herning. This cottage brand, which only employs four full-time machinists in the little town of Herning was set up in 1931 by entrepreneur and knitwear obsessive, Soren Skyt. He designed a practical range of sweaters inspired by those worn by fishermen, featuring his brand’s signature bobble knit. The bobbles make these sweaters especially warm and pleasingly tactile with an almost sculptural texture, like braille. Crewneck or roll, be warned, SNS Herning sweaters tend to get their wearers stroked.

“Scandinavian brands reach into their history to find inspiration—whether this be Minimalist conceptual designs from Acne Studios—founded in Stockholm—or a perfectly detailed waterproof cagoule from Norse Projects,” said Olie Arnold, style director at Mr Porter. “These labels also do basics really well—T-shirts, sweatshirts, jeans and sneakers. They create the building blocks for a man’s wardrobe that feels effortless and unforced,” added Mr. Arnold, a big fan of these clothes.

But, hold on a minute. Aren’t these basics the core of American sportswear that was sold to the world? “That’s exactly right,” Mr. Arnold said and laughed. “But the narrower fit and pleasing lack of adornment makes the Scandinavian versions feel modern compared to similar kit from anywhere else.” Listen up, the Gap.

Another style staple America has sold the world is workwear. From the invention of jeans by Claude Levi Strauss to tough, go-anywhere Carhartt canvas jackets, workwear has long been synonymous with the big outdoors and the American manual worker. And workwear, like sportswear, has been cleverly co-opted by Scandinavian fashion in its cunning reboot of the American aesthetic. “Our Legacy, Acne Studio and Norse Projects are gaining increasing amounts of traction in the menswear market,” Mr. van den Broeke said. “Their designs combine understated overshirts with bellows pockets and tough workwear-inspired trousers, to which they add a figure-enhancing taper.”

The truly Scandinavian touch is producing these basic designs with ultra high-end fabrics such as Egyptian cotton, lambswool and cashmere, which add high fashion heft to regular pieces. It’s a canny design move. “The cut of these garments is so important,” added Mr. van den Broeke. “Long, lean shapes are designed for Scandinavian men’s physiques, but the shape holds the current direction in menswear, too. It’s a desirable mix that feels serious enough for men to get their heads round and experimental enough to get their fashion juices flowing. This is what is really making these labels fly right now.”

Norse Projects spring range includes covetable rainproof bucket hats and taupe macs alongside lean, navy brushed cotton pants and a collection of just-edgy-enough artist emblazoned T-shirts. This look is definitely aimed at the dude who is wearing these looks rather than being a mere hanger for the clothes. Hardly the case with the more bells and whistles, rock ‘n roll trends happening elsewhere in menswear this season.
But perhaps the brand that is popularizing Scandinavian fashion more than any other is that beloved of fashion folk globally for its slick interpretation of high end fashion at affordable prices, Cos. The chain, already popular in Europe, opened its first store in New York at the end of 2014. With the advantage of the manufacturing and distribution of its big brother, H&M, this Swedish gem is cleaning up wherever it opens.

“Cos makes getting dressed so easy,” said Marcus Jaye, a.k.a. The Chic Geek, a menswear blogger. “But with a grown-up and sophisticated simplicity.” With its white leather sneakers featuring a bold wrap-over of elastic to rolled-edged striped shirts and outsize Kimono-inspired T-shirts, Cos menswear is pumping out high-end-looking gear at a third of what similar designs from more storied designers would likely cost. The affordability of Scandinavian fashion is a cornerstone of its success.

“Another clever element of Scandinavian menswear is the use of color,” Mr. Jaye said. “Everything tones with everything else, and the color range, usually neutrals such as white, gray, taupe or navy, makes dressing very easy.” he said. “Which is so appealing to men who don’t want to fuss about what goes with what—most do not even want to consider that.” Sounds cool and simple, the epitome of Scandi style in fact. Oh, and if you do happen to end up running around a few fjords and mountains trying to solve a murder, you’ll be perfectly toned with the landscape. 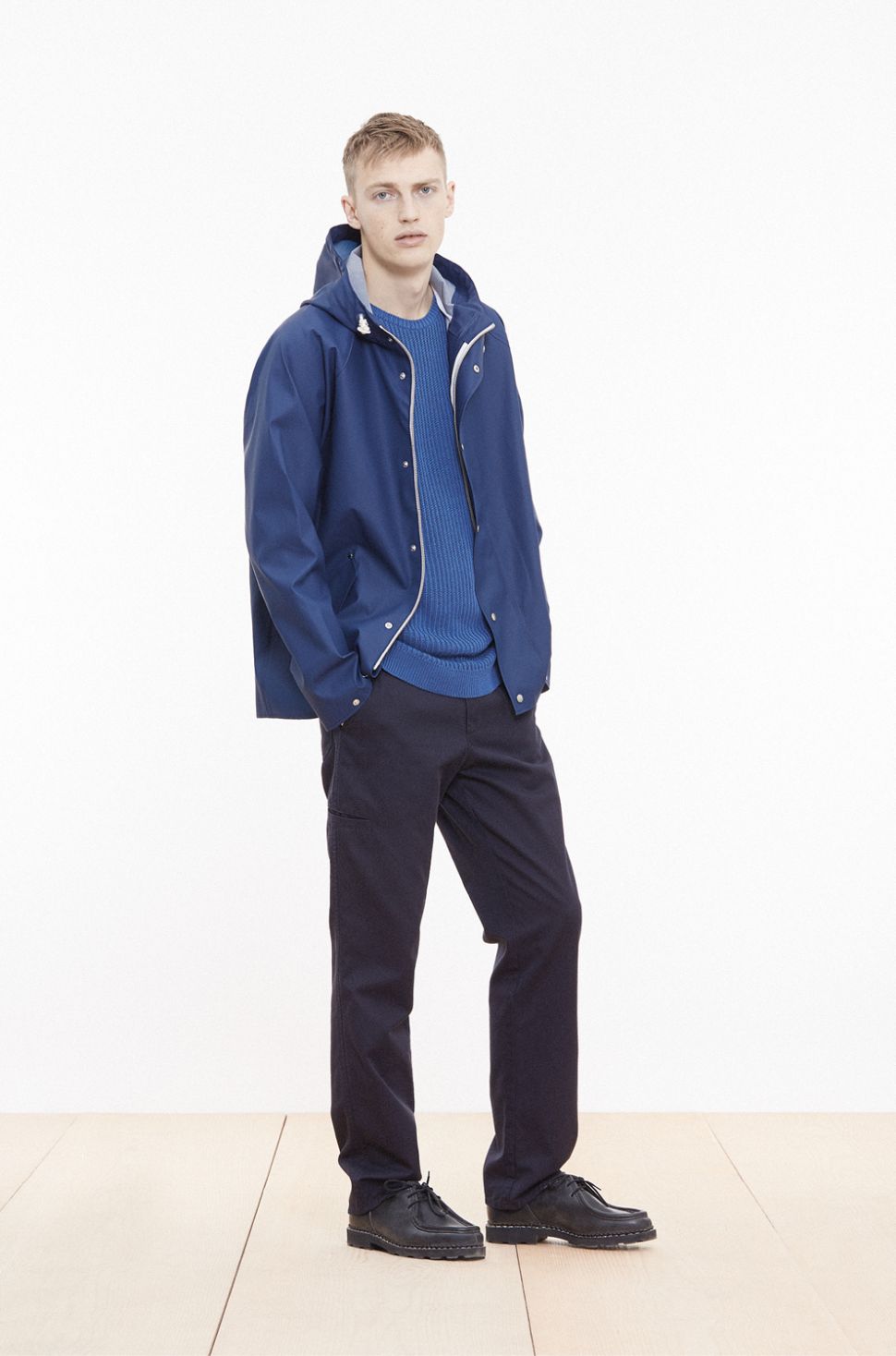