In the Game of Thrones universe, Jack Bender is a walking spoiler alert. As director of “The Door” and “Blood of My Blood,” Mr. Bender brought to life both Hodor’s origin story and the true identity of Coldhands, months–possibly years–before George R.R. Martin broke the news himself in the source material. But hey, the 66-year-old artist and fillmmaker truly can’t help himself; where Mr. Martin has a notoriously slow hand, Mr. Bender is almost supernaturally productive. He holds multiple directing credits across a diverse resume–from The Sopranos, to Alias, to Under the Dome–and played a crucial part in the bonkers mythology of Lost as executive-producer alongside J.J. Abrams and Damon Lindelof.

And, somehow, he is also quite the accomplished painter (That mural inside the hatch from Lost? All Mr. Bender.)  In between Game of Thrones gigs and an upcoming Stephen King adaptation (Mr. Mercedes) Mr. Bender published The Elephant in the Room, snippets of his art and writing that Mr. King himself has called a “children’s book for adults.” It’s a far softer work than anything on Lost or Thrones but none less gorgeous for it, a collection of odd-ball images and simple stories of self-discovery that prove Mr. Bender is just as adept with a paint brush or pen than he is at wrangling ten ton dragons.

The Observer recently hopped on the phone with Mr. Bender from his Los Angeles studio for a wide-ranging chat, covering art, Lost, Game of Thrones‘ shortened seventh season, and the original, far more brutal plans for Hodor’s “Hold the door” sequence.

Where do you think the intersection is between your painting and your directing?

Both are visual storytelling. Certainly my art is completely personal, and comes from me. As opposed to some of the TV I’ve been lucky enough to do, whether it be The Sopranos, or Alias, or Lost, which I was vital to since the beginning. Game of Thrones, most recently. But with those shows, not writing them, not giving birth to them on that level, I always feel like I’m a cook. I’m a chef that gets these great recipes, and I get to make the plate.

One of the things I’ve learned from painting is to be spontaneous. I call it “Junk Blessings”, from when I used to drag junk home to make art. I always find these junk blessings when you’re creating a show. What you create from sloppy mistakes, or an actor’s ideas that are different from your own. I definitely learned from painting that when a splash of paint drips on to the canvas, you can be transfixed by that mistake. It’s the same with the drips the actors are going to bring to the story. That was one of the main things I learned as exec-producer and director on Lost. I had never done anything for 6 years. At the beginning, I was probably holding on too tight to what my vision was going to be after J.J. [Abrams] and Damon [Lindelof] made that extraordinary pilot. But over the years of doing Lost and letting it be what it needed to be, I learned a lot about letting go and letting the people around me create as much as a I did.

What’s a specific example of a “junk blessing” from over your directing career?

Dominic Monaghan, when we were doing the scene in Lost where he drowns, where Charlie is killed and he holds his hand up and it says “Not Penny’s Boat.” I said “I’m going to see you float away, and get more and more out of focus in the distance because of the . And he said “Well what if I cross myself?”

Because Charlie was religious. Immediately, “That’s brilliant. It brings you back to your roots.” When J.J. saw that episode he called me and said “Oh my God, that’s so great, you’re such a genius.” And I said “Well, thank you, but it wasn’t my idea.” One of those moments where you step back, and let what happens in that world happen naturally.

Did this happen often on Game of Thrones?

Oh, yes. That’s one of the best things about having the blessing of working with people who really care, which was certainly my experience on Game of Thrones. Originally, I thought to myself, “What the hell am I going to bring to the world’s biggest show?” And [Game of Thrones creators David Benioff and Dan Weiss] very specifically wanted me to do this one episode, the “Hold the Door” episode. Which has now become part of the lexicon.

It’s funny, because until now I didn’t notice how Lost-like that “Hold the door” sequence was.

The crossing of time, and time starting to merge on Game of Thrones is definitely a turn the show is taking. But David and Dan, and everyone who works on that show, were completely open to me. That made it a pleasure. The theater stuff in Braavos was really fun because it brought me back to my theater days, directing Shakespeare and Rosencrantz and Guildenstern Are Dead, all those shows.

It was funny, because David and Dan wrote those scenes somewhat tongue in cheek. Kind of mocking some of the history of the show. And I took it a step farther. I rehearsed it like a play. There’s a lot more to that play that ended up in the show.  Then I ran the whole show for the show-runners, like we were the Game of Thrones Players.

You went through every season?

Well, not the entire thing, but there were more sequences to it than ended up on HBO. I had all the fart jokes and all that silliness, and my only concern was, am I mocking this brilliant show too much? And Dave and Dan said “No, do it more.” They’re completely unpretentious, brilliant guys. And that’s the way they wrote it, that some of the history of Game of Thrones is going to be fart jokes.

It’s interesting that both episodes you were given were very revealing, in terms of twists from the books. Hodor’s origin story, the Benjen Stark stuff. How aware were you of that?

I knew they were finished with the books, and that George Martin is writing more. I knew season six was going to continue from where the books ended. And I confess, I had seen every episode of Game of Thrones but never read the books. I just wanted to do the best job on a show that I consider really brilliant. But I feel that whenever I work. As an artist you fluctuate between audacity and insecurity depending on the day, depending on the hour. You have to be audacious enough to say “This is what we’re doing guys, trust me.” At the same time, right on the other side of that tight rope you go “Really? What do I know?” Thankfully there were enough people on Game of Thrones to make sure I didn’t fall off the cliff.

We talked about your painting process and visual storytelling. I’m wondering if you back to that at all when dealing with scenes that heavily involve CGI, like the end of “Blood of my Blood”? Where you’re asked to deal primarily with something that isn’t actually there?

Certainly, I’m a very visual person. As a kid, I didn’t read a lot I watched television and movies. I’m sure I was ADHD and all those things that weren’t diagnoses then. I’m much more visual than I am anything else, it’s the stronger part of my brain. So I think in visual terms. But I also really like working on Game of Thrones with the multi-Emmy winning, brilliant cinematographer Jonathan Freeman. And the team of visual artists and CGI guys who do that show, and create all that. Because you have a lot of time on that show, where the schedule is more like a feature. There are five directors who do ten episodes, two each. In fact this coming season there are only going to be seven episodes.

But you have time to do previs-ing. The whole cave sequence was essentially storyboarded; you get to make the movie before you make the movie, you know? And then of course when you’re making it, like with any storyboarded sequence, you go with whatever happens that day on set. The good news is that life usually takes over.

I’d love to talk about that “hold the door” scene in particular. What were your thoughts after finally reading the scene on the page?

It was a daunting scene to read, and was challenging on multiple levels for Jonathan, the cinematographer. He drove himself crazy how to light cave where there was no light and no torches. There were no cracks in the ceiling here except the section where some of the dead came in from above, because they couldn’t cross the fire line.

Early on I had the idea to make it one shot that just pushes in and gets closer and closer, and then the parallel high shot that gets closer and closer to Wylis, who became Hodor. I talked about it with Dave and Dan a lot. I said, “What the dead would be doing to Hodor would be ripping his clothes off once they got through that door. They would be ripping his flesh off. If the dead can go through wood, they’re going to be tearing Hodor apart.”

And they said something to me that really stuck. Which was “If it’s too horrific, we’re not going to feel the loss of Hodor.” And that was my compass the entire time, to make us really care at the end. I still wanted to make it scary enough, see Hodor surrounded and engulfed by these skeletal arms and long fingers, that were eventually going to smother and kill and rip him apart, or whatever they were going to do that we didn’t see. But to not let the horror of it overwhelm the emotion of losing that character and making it really land on the idea that he was sacrificing himself so his friends could get away. That was the dominant idea. 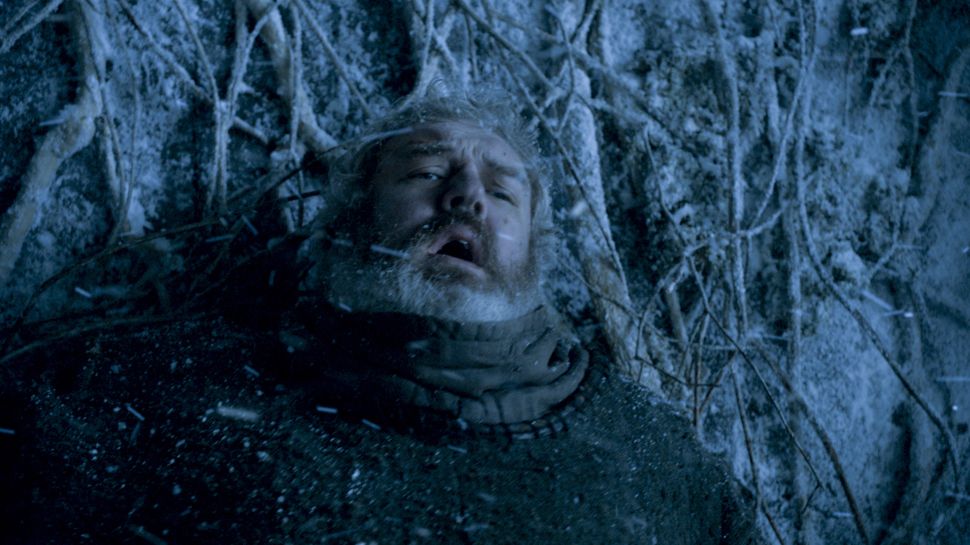 Filed Under: TV, Game of Thrones, Lost, The Sopranos, Alias