Toothless is not a word I would ever imagine applying to Bret Easton Ellis’ turbulent, disturbing and bloody 1991 novel American Psycho. Nor could I ever have imagined it set to music. But now that I’ve seen the rhythmic, violent and pulsating new Broadway musical currently churning audience guts at the Gerald Schoenfeld Theatre, I’m convinced anything can happen. It’s a big boffo entertainment with a lot of good things to like, but it’s so uneven it made me wish it could be better and so timid it makes that part of the audience that doesn’t walk out wish it could be more shocking. American Psycho has a problem: It wants to be a mirror to what’s wrong with society but never manages to get around to more than making a list and checking it twice. You leave both dazzled and disappointed. That’s how it goes with musicals about serial killers.

This is the one about Patrick Bateman, the clean-cut, preppie, all-American Wall Street banker in the Brooks Brothers suits by day who spends his nights cruising the bold-face New York boîtes and bars looking for victims to slash, knife, chop, poison, gun down, dismember and dunk into bathtubs of flesh-stripping acid. Patrick is a combination fashion plate and Ted Bundy, who sings and dances his way through homicidal theme songs called “I Am Back” and “Killing Spree.” You’re supposed to shudder, but as played by the devastatingly handsome and enviably buffed Benjamin Walker in little more than his white bikini Calvins, you really just want to know the name of his personal trainer.

Smoke, strobe lights and deafening pop tunes are balanced by his austere apartment devoid of clutter with its carefully selected Mies van der Rohe-inspired furniture and impeccable collection of designer colognes, fruit peels, aftershave exfoliates and mediocre songs by Duncan Sheik, as Patrick’s life unfolds in a series of Gentleman’s Quarterly covers. He’s a 27-year-old Adonis who self-worships shamelessly. He’s addicted to favorite videos such as The Evil Dead and The Texas Chainsaw Massacre, which he imitates in dark alleys and dimly lit streets of Manhattan after midnight. He boxes at the Harvard Club, reads The Wall Street Journal and The New Republic, wears double-breasted, pin-stripe suits with tassel loafers, dines on pretentious food, dances at The Tunnel and knows everything about contagious diseases and viruses. When he dates, it’s usually anorexic blondes who weekend in the Hamptons, sing “I want blackened mahi mahi/It goes so well with Isaac Mizrahi” and rhyme “ironic” with “Manolo Blahnik” in a song called “You Are What You Wear” that pretty much sums up Patrick’s disgust at (and obsession with) the superficiality of fashion magazine-fueled consumerism. The setting is 1989, but the big news in American Psycho is that nothing ever improves.

So what is American Psycho really about? It’s a cynical attempt to turn over a rock and take a look at what crawls out. But at the same time, it wants to make what crawls out look so glamorous and alluring that you turn hunter green with envy, and then, finally, it sanitizes everything by making Patrick his own worst enemy and his own best friend at the same time, leaving you in a head-scratching stupor. He has many sex partners but one special girl who wants a 16-tier cake by Ben & Jerry and a ceremony videotaped by Annie Liebowitz. The audience paying hundreds of dollars a ticket for this musical carnage is the same as the company of artificial human robots the show depicts onstage. It’s got everything covered—including itself.

Meanwhile, the direction by Rupert Goold is never less than riveting. It includes an intermission where you get to watch the stagehands wash down the fake blood from the plastic scrim and polish it clean with the long-handled wipers they use on the windows at Bloomingdale’s. Cultural references are amusing and nonstop. So are the leaden songs about vivisection and decapitation as Patrick dances with assorted hatchets and chainsaws. When the corpses he’s been stashing away in an empty rental apartment he uses as a storage locker all get up and waltz together like a ballet of Specter of the Rose starring the zombies from Night of the Living Dead, concept turns silly, and the audience roars. So American Psycho finally hangs itself in its own noose. Sometimes it’s imaginative. At other times, boring and uncertain. And at nearly three hours, always too long. The pointless finale, in which Patrick asks the audience to like him, suggests that what we’ve just seen has been an illusion. Sterility sets in, diluting the entire enterprise.

Despite my reservations, it’s worth seeing for the flamboyant effects and for Benjamin Walker’s spectacular, unflagging charisma. But if the character he plays is a deranged symbol of the synthetic superficiality of the ’80s, American Psycho now comes full circle—a delusional metaphor for a generation of fresh new wackos. Like it or not, the beat goes on.

Pity the poor theatergoer who never saw the original production of Becky Mode’s Fully Committed down at the Cherry Lane with the terrific Mark Setlock as a rattled, stressed-out and gainfully unemployed actor working at an ulcer-inducing, part-time job taking phone reservations for one of those ridiculously pretentious, trendy, snobby, overrated and over-priced New York restaurants you can’t get into without a blood test. It was a career-defining performance in a hilarious one-man show that broke records playing to packed houses. Well, it’s back, 16 years later, having moved all the way uptown to the Lyceum Theatre on Broadway, but the lights have dimmed. For the lure factor, Mr. Setlock has been replaced by Jesse Tyler Ferguson, a mediocre television sitcom star with more marquee value but much less talent. The result is less fully committed and much more tentative. The once-hip Manhattan audience is now composed of people bussed in from the burbs who know all about television but nothing much about what it takes to make a Broadway production spin and pop with perfect timing. It’s no longer a matter of life or death to get into Fully Committed. The bottle’s open and the fizz is gone.

The title is the restaurant term for “all booked up”—words we have come to know as well as “No problem” and “Have a nice day.” The play depicts the pathetic and deeply sympathetic plight of a guy named Sam who finds himself gagging on the explanation of a menu that offers pretentious muck like sea urchins stuffed with foie gras under a waterfall of figs and Pernod at 200 bucks a person. You’re flushed going in and green coming out, and all you want is a transfusion of Zantac, but New York is your oyster, even if it won’t stay down. Mr. Ferguson, a regular on the sitcom Modern Family, is the only actor on a stage full of telephones—frustrated, sweating bullets and a victim of the rich, famous and downright obnoxious wannabe customers who would kill for a table that has already been taken two months in advance in a restaurant from Hell that has nothing to do with the quality of the food. It’s alarming to see him do so little with such a juicy role. A serf from Gwyneth Paltrow’s office demands a table for 10 and specifies no meat, no dairy, no females waiting tables, only special music, no soy, no fat, no salt and a change of the lighting sconces to softer bulbs. Instead of hysterics, he acts like he’s going to be late for a call back.

Harassed by gangsters offering cash, sheiks from Kuwait, ditzy old ladies from the South, rude socialites you will easily identify from the gossip columns and senior citizens demanding AARP discounts, Sam has his hands full. Between the multitudes of whining, pleading, desperate callers of all accents, rival actors and neurotic and outrageously overpaid chefs who concoct preposterous dishes you wouldn’t feed to your worst enemy’s pit bull, there’s Sam’s dad wanting him home for Christmas and his agent reminding him his career is not the fiasco he thinks it is. (Remember last year’s Neosporin commercial!) Mr. Ferguson plays them all with a whirlwind of clumsy, poorly timed confusion, rattling off the various voices that come and go with accents that often change in the middle of a sentence, making the whole thing absurdly hard to follow. The maitre’d goes from French to Russian to Brooklyn stevedore without inhaling. He has muddy, incomprehensible diction. His voices lack texture, and most of the time he switches from talker to listener without changing his inflections at all. Trapped in a straight jacket by Jason Moore’s shrill direction, all that was once fresh and funny has been ground and grated into a colorless mush.

The first time I saw Fully Committed with Mark Setlock, it was a one-man tour de force with intricate stopwatch timing. I hadn’t laughed that much since Elaine May got trapped by her bridal gown on her insanely dysfunctional wedding night in A New Leaf. When I saw this plodding revival, I could barely manage a chuckle. It’s still a novel idea—short and sassy and without intermission—but you can’t say Jesse Tyler Ferguson is an actor who gives good phone. 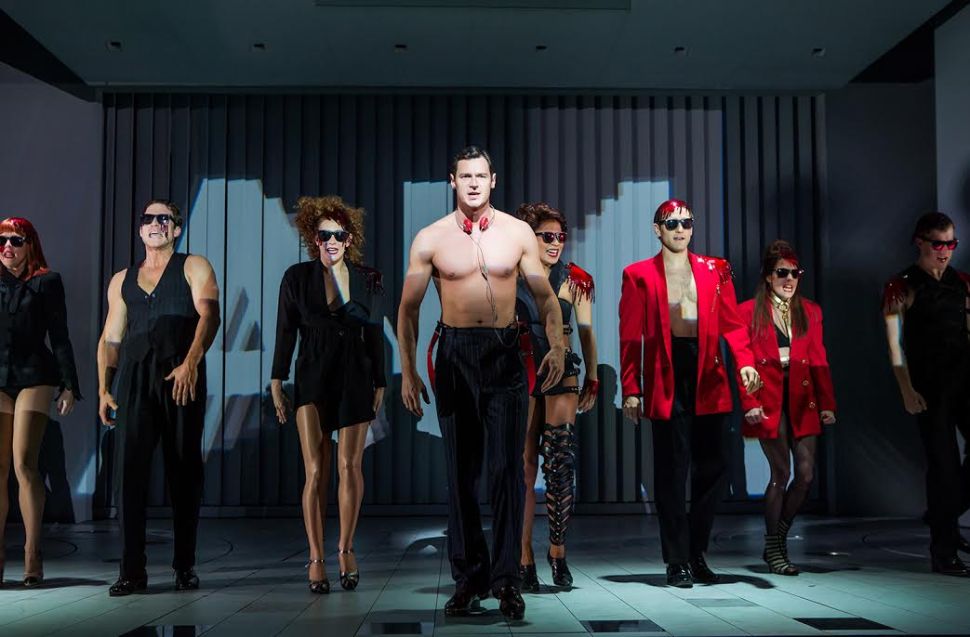