Challengers Alex Law (left) and Bob Patterson (right) with incumbent congressman Donald Norcross at Tuesday’s debate. Norcross and Law are facing off in New Jersey’s primary next month for the Democratic nomination.

VOORHEES — The race for congress in New Jersey’s first congressional district will hinge on a young newcomer’s chances against U.S. Representative Donald Norcross in the Democratic primary next Tuesday. Former IBM consultant Alex Law, who reached the minimum age to serve in congress while his campaign was already underway, didn’t mince words at a Tuesday debate hosted by the Chamber of Commerce.

“This is the only district in the United States of America that has not had a single bill written by the representative of this district that has become a law,” Law said. “In my lifetime.”

Law went on to attack Norcross’ support for the controversial Keystone Pipeline, while Norcross went after his progressive challenger for opposing “no fly, no buy” legislation and supporting the legalization of marijuana. Law’s positions, the congressman argued, implied a willingness to allow more guns and drugs to enter the district’s long-suffering city of Camden. Norcross pointed to the 2012 derailment of a train carrying toxic chemicals through neighboring Paulsboro, saying he believes a pipeline would be the safest option.

“The safest place to put it is in a pipeline,” Norcross said. “From terrorism and from the tracks themselves.”

Law has drafted his own bill to give communities affected by existing drug policies priority when awarding licenses to sell legal marijuana. Law’s opposition to the Denying Firearms and explosives to Dangerous Terrorists Act, which would deny those on federal no-fly lists the ability to purchase a firearm, has also been the focus of attack mailers from the Norcross campaign.

“Sending more illegal drugs to Camden is not the answer. That is a problem,” Norcross said to applause. “The two cornerstones are drugs and guns. And that’s the difference between myself and the other gentlemen standing up here. If you’re on the suspected terrorist list, I say you shouldn’t get a gun.” In response, Law pointed to the economic gains legalization has brought to other states, and argued that crime has gone down in those parts of the country as funding for education has gone up. Law also took a jab at Norcross’ New Jersey Economic Opportunity Act of 2013, which paved the way for generous tax subsidies to companies like Holtech International, which relocated its offices to the city in 2015.

“The areas that have legalized marijuana, places like Colorado and Washington state, have seen the most new millionaires anywhere in the country. And that’s without ridiculous government subsidy programs that have been tried here.”

On gun control, Law pointed to his platform on other gun control issues. Law said that he objects to “no fly, no buy” on constitutional grounds.

“Unequivocally, I don’t stand with the NRA,” he said. “I am strong on gun reform, things like closing gun show loopholes, increasing funding towards mental health care, a national system of background checks.”

Law, who has run on an anti-patronage and anti-South Jersey establishment platform, said that voters should look to the success of his grassroots campaign against one of New Jersey’s most politically connected elected officials when questioning what he could do in congress. Norcross is the younger brother of insurance executive George Norcross III, the former chairman of the Camden County Democratic party and one of the state’s most powerful unelected officials.

“Those are the skill sets that we need in Washington, to take $70,000 and make it go just as far as $1.5 million,” Law said. “Imagine we could do with a billion dollars.”

Norcross and Law were joined by Republican Bob Patterson, who is running unopposed for his party’s nomination in the district and has kept a low profile so far. When the topic of the debate turned to healthcare, Patterson proposed turning South Jersey and Philadelphia into an “enterprise zone where we fast-track discovery of cures and vaccines for such diseases as Alzheimer’s and all forms of cancer.”

“Most Americans are more concerned about their health than they are about the care they receive,” Patternson said. “This process has to be fast-tracked. We need greater incentives so that this can happen.” 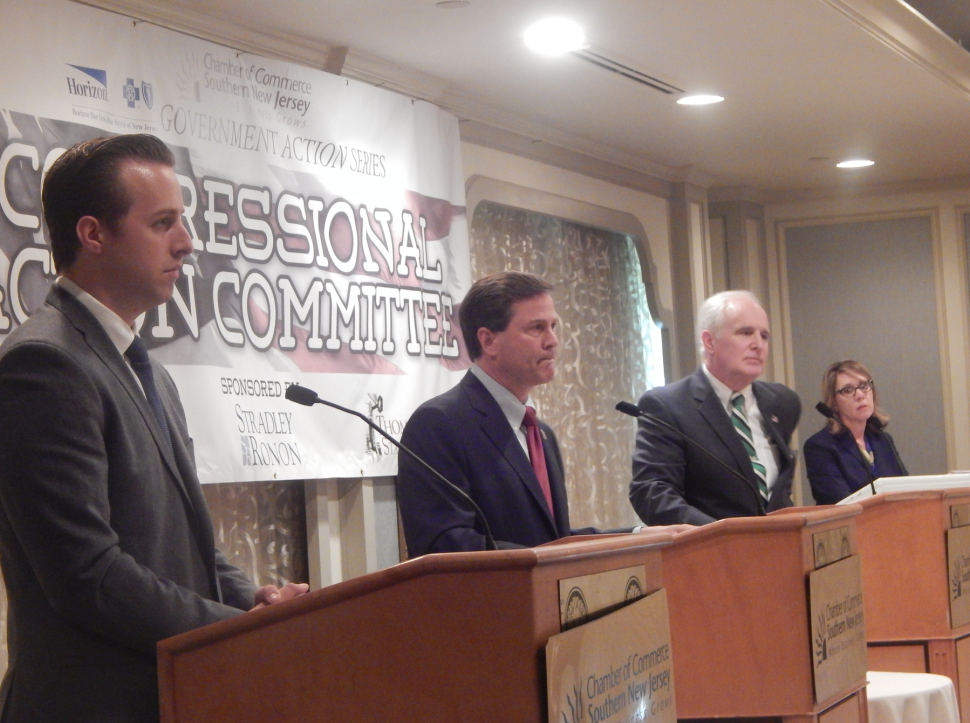