The City Council today released a final version of a contentious package of legislation that reduce several quality-of-life infractions from crimes to mere fee-carrying violations—and which it will vote on Wednesday.

Collectively called the Criminal Justice Reform Act, the eight bills will downgrade most criminal noise violations, spitting, littering, possession of an open container of alcohol, public urination and after-dusk loitering and other prohibited activities in public parks to offenses penalized with a ticket. The legislation will also establish a system of escalating fines for repeat offenders, and leaves open the possibility of criminal enforcement of such non-violent infractions in “limited circumstances”—which a Council source said lawmakers will work out with the police department in the coming months.

“For too long, New York’s criminal justice system has been broken—it’s time we fix it,” said Council Speaker Melissa Mark-Viverito, who long championed the criminal justice reforms. “The Criminal Justice Reform Act is going to continue to keep New Yorkers safe while also creating a more fair and just system that will ensure the penalties fit the crime.”

Supporters of these changes have long maintained that the NYPD disproportionately arrests and charges nonwhites for such infractions, often leaving young black and Latino men with damaging criminal records. The package of bills will obligate the police department to collect demographic and geographic information about recipients of tickets, and require the the city to create community service options for people unable to pay the fees.

“It is obvious to all conscientious people that the criminal justice system has had a disproportionately negative affect on black, brown and poor communities,” said Brooklyn Councilman Jumaane Williams. “The unequal enforcement of law and practices that happen in communities of color has had lasting intergenerational effects on families and neighborhoods, systematically destroying the futures of so many.”

The various components of the Act will phase in over the course of a few months to a year. Mayor Bill de Blasio’s administration, initially resistant to the decriminalization plan, endorsed much of it at a hearing in January.

The proposals have proved controversial, even among Democrats, but the revised legislation quickly picked up plaudits from civil rights groups today.

“This set of reforms helps to move the criminal ‘justice’ system closer to actual justice and away from an overreliance on arrests, prosecution and jail for low-level offenses,” said Tina Luongo, the attorney in charge of the criminal defense practice at the Legal Aid Society. “The past policies that focused on arresting and detaining people for so called ‘quality of life’ offenses created a very broken system that disproportionately penalized communities of color and low income New Yorkers.” 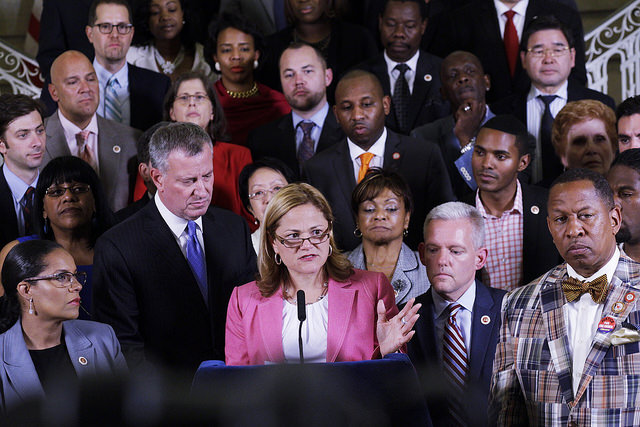