On Saturday afternoon, in the lead-up to the Preakness Stakes, the second leg of horse-racing’s Triple Crown, two horses died as a result of injuries incurred on the track. Pramedya broke his leg. Homeboykris appeared to have a heart attack after winning his race.

The press reaction was immediate, widespread, and by and large outraged—reminiscent of the 2008 Kentucky Derby, when Eight Belles broke both forelegs during her second-place finish and was euthanized on the track before the horrified gaze of millions of viewers. In the eight years since Eight Belles’s death, horse racing has gotten safer. According to the Jockey Club, there were 484 fatal injuries last year, or 1.84 per 1,000 starts, as opposed to 790 in 2009, or 2.00 per 1,000 starts.

Apparently this is enough to mollify some observers, including a writer for The Guardian, who regarded the coverage of the deaths of Pramedya and Homeboykris as little more than clickbait. Instead of focusing on “a handful of races” each year, the author says we should judge horse racing as a whole, rather than sitting back and waiting for a tragedy.

Well. Reporters may well be sitting back and waiting, but not for want of tragedies. Saturday’s pair of deaths were not not only not an aberration, but something that happens, on average, about 80 days a year. No one is “seiz[ing] on the opportunity,” as The Guardian writer puts it. They are, rather, ignoring about 80 “opportunities” every year. And the solution to this is not better coverage. It’s not “asking hard, necessary, and inconveniently complex questions,” which have been asked and answered many times already. The solution is banning horse racing.

The Guardian author writes, “It’s difficult to resist the urge to be cynical. One member of the racing media characterized the coverage as a ‘cheap attempt to get clicks,’ and it’s tough to avoid reaching that conclusion, given the paucity of reporting on horse racing by many of the outlets who blasted the news out on Saturday.” This is the equine equivalent of saying that writing about the murder of transgender women is sensational because there’s so little coverage about the rest of their lives. It’s not about the fucking coverage. It’s about torturing animals. Not for food or clothing. Not for farm work or something that might have some other productive benefit. For entertainment, pure and simple. Good old-fashioned blood sport of the kind we find so shocking in ancient Rome.

Imagine if your cat had a litter of five kittens, and you drowned four of them because they weren’t pretty enough. That’s the thoroughbred industry.

Put aside the gruesome on-track deaths for a moment. This is the tiniest part of the story. The vast majority of horses are pumped full of legal and illegal drugs to eke a few more races out of them: “Lasix (which controls bleeding in the lungs), phenylbutazone (an anti-inflammatory), and cortiscosteroids (for pain and inflammation).” What’s more, according to The Horse Fund, “two out of every three Thoroughbreds who come off the track—even those who are sound and healthy—are euthanized, abandoned or shipped to slaughter.”

And this doesn’t take into account the shocking number of thoroughbreds who are destroyed merely because they’re not fast enough to earn their owners any money. In the U.S., about 25,000 thoroughbreds are born each year. A good 40 percent of them are killed as foals, merely because it looks like they won’t be fast enough to race. Most of the ones who do make it to the track run on second- and third-tier courses, where conditions are even more grueling than at the marquee events like the Triple Crown races. See the stat in the paragraph above for what happens to those poor animals when they’re no longer making their owners any money.

Horse racing isn’t a sport or a hobby. It’s not analagous to, say, the four people who died climbing Mt. Everest in the last couple days. Those people chose to take that risk. It’s not even like boxing, MMA, or football, where poor people voluntarily submit to a lifetime of pain for pretty low wages because it’s the best job available to them. These horses don’t have a choice. They get nothing out of it. From the animals’ point of view, there’s no difference between horse racing and cock fighting or dog fighting. It’s animal torture for the sake of human entertainment.

Imagine if someone came over to your house and started beating your dog with a whip to make it run around in circles until it had a heart attack or broke a leg. That’s what a horse race is to almost 500 horses every year. Imagine if your cat had a litter of five kittens, and you drowned four of them because they weren’t pretty enough. That’s the thoroughbred industry.

To put it another way: take that Jockey Club statistic about 1.87 horse fatalities per 1,000 race starts. The audience capacity of Churchill Downs, where the Kentucky Derby is held, is 120,000. Imagine a big sign at the entrance to the track that read: “Admission is free today, but 224 people will be selected at random and killed.” How many people do you think would walk through the gate?

When I was a kid, my favorite books were Walter Farley’s Black Stallion series. I anthropormophized horses, and thought they formed some kind of empathic bonds with their trainers and jockeys—that they wanted to win these races just as much as their handlers did. I used to love to watch the Kentucky Derby and the Grand National. The hats. The mint juleps and Pimm’s cups. The longshot that pays thousand-to-one odds. But the romance is all for the spectators. The truth is that horse racing is about as charming as a bunch of white people dressing up in antebellum outfits and getting married at a slave plantation. 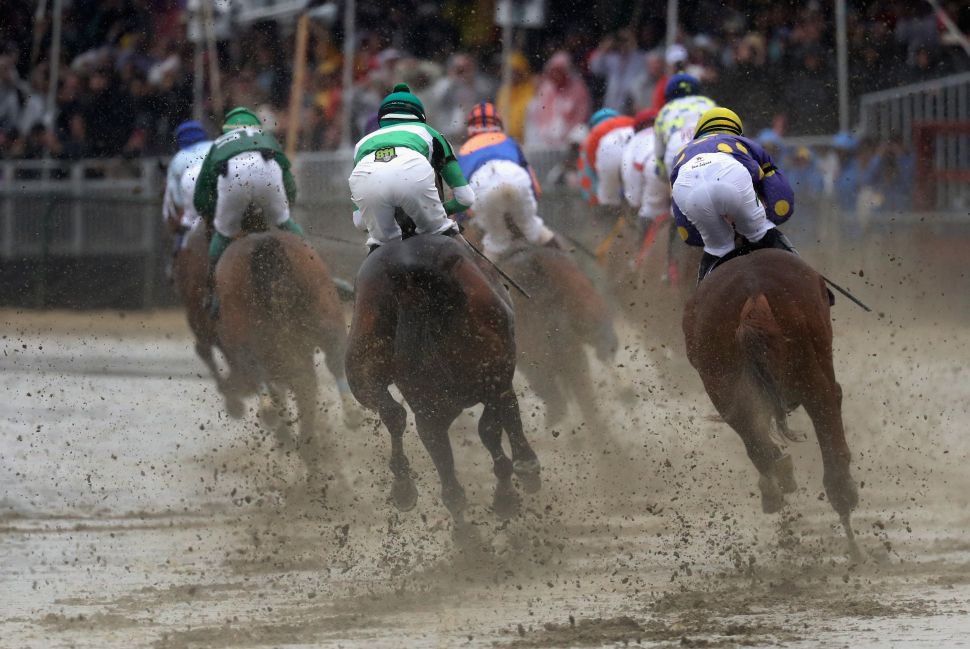