There are always a lot of different storylines flying around Orphan Black, but they all boil down to one basic theme: Anything you think you know is true ain’t necessarily so. You don’t really know anything at all, ever. About your own family, your own body, your own self, your own mind. These will all turn out to be something fundamentally different than you supposed.

And so, three episodes ago, when a new character was introduced in a sheep mask, and she seemed correspondingly shy, scared, meek, we should have known she was anything but. Despite her mask, M.K. is the opposite of a sheep. Pretty sure we’ve got a common English expression that conveys that exact idea?

Far from the afraid-of-her-own-shadow quiet conspiracy nut we were led to believe, M.K. turns out to be yet another of Orphan Black’s avenging angels, swooping in to exact retribution in a burst of flame.

And where her avenging angel counterpart Helena is erratic and venal, she is systematic and precise—which is, in its way, even more terrifying. So this week’s cold open shows M.K. going through the weird methodical elements of her day: timing herself as she brushes her teeth, as she cooks her food, but also as she crimps wires, as she attaches detonators to blocks of C4, as she hacks into Topside’s computer network searching for the identity of one Ferdinand Chevalier.

Ferdinand, of course, is with Mrs. S and Sarah, having just saved the latter from the dental hygienist from hell. And though they’ve got little reason to trust each other, they do have a common cause: Sarah needs to find Susan Duncan, who may be the only person who can remove the maggot-robot from her cheek. And Ferdinand wants to find Susan’s captive Rachel, who, it turns out, he’s in love with. Hey, murder-happy psychopaths need love too!

Ferdinand doesn’t know how to track Rachel’s message, but he believes Sarah knows someone who can. Because who else but an expert hacker could have tipped Sarah off that Neolution had found them in Iceland? So Sarah has to ask M.K. to find out where Rachel and Susan are.

Of course, M.K. herself isn’t particularly easy to find, but Sarah prevails upon Dizzy, the crusty dude she met in Club Neolution, to put them in touch. When Sarah gives M.K. the message, she’s cagey about where she got it from—big mistake, since M.K. with a secret is like a dog with a bone. When she figures out that Ferdinand was the intended recipient, she goes cold on Sarah, saying she can’t trust her since she’s in league with Topside, or at least with Topside’s “wetwork” guy.

Increasingly desperate—wouldn’t you be, if you had a weird worm-thing of unknown origin living in your face?—Sarah goes back to Dizzy, who figures out that M.K. works as a night watch-person at a junkyard. And I dare you to think of a more “this person is clearly a wacko conspiracy theorist” profession than that.

Once they circumvent the pressure-plate bomb under her trailer’s welcome mat—because yup, M.K. is actually super fucking terrifying—they uncover the truth: M.K.’s real name is Veera Suominen (usually so good with names, the show went for the too-obvious on this one—Suominen basically means “Finnish person”), and she is the sole survivor of Topside’s devastation in Helsinki.

A refresher: When Topside sent Ferdinand to wipe out Sarah and her sisters, they used the codename Helsinki for the mission—a reference to a previous “incident” in which six Leda clones in the Finnish capital became aware of their clone status and so Topside had Ferdinand kill them all. Along with 32 of their relatives and friends as collateral damage.

Now M.K. is out for revenge for her clone sister Nikki, who was gassed to death. She lures Ferdinand to Beth’s house, where she’s laid a trap for him: another pressure-plate bomb, this one on a chair for him to unsuspectingly sit on. So that he’s a captive audience while she gives him a bit of her backstory via slideshow. Because M.K. may be a ruthless, vengeful psychopath, but she’s also such a nerd that her nefarious plan has to involve a PowerPoint presentation.

Then she douses Ferdinand with gasoline and is about to set him on fire when Beth swoops in. She convinces M.K. to stand down, but not before she forces Ferdinand to transfer all of his millions of dollars to her. And then M.K. disappears, leaving behind a broke and terrified Ferdinand, a Sarah no closer to finding Susan Duncan, and the vague implication that maybe all of this was actually a heist rather than a murder. It’s possible, in fact, that M.K. tipped off Sarah to the imminent attack in Iceland in the first place in order to eventually lead them all to this endgame. Seems a stretch, but Orphan Black has pulled off stretchier.

Over in Alison-land, our heroine is hanging at a coffee shop when Trina, the pregnant Neolutionist girl with the magnets in her fingers from the season premiere, spots her. And immediately thinks she’s Beth, because of course. (Seriously, how did it take these women this long to discover that they were clones? Weren’t people constantly walking up to Alison on the street and saying “Howdy, Detective Childs!” for years? Did she just ignore them all as lunatics?)

Trina’s upset because she told Beth to drop the whole thing, but there she was asking around Club Neolution (actually, that was Sarah, there looking for Trina after seeing her on Beth’s surveillance tapes) and snooping at the Lifespring fertility clinic (that one was probably Beth, since none of the rest of them had ever heard of the place). She storms off, telling “Beth” that “I told you I was a carrier in confidence.”

No idea what that means, but it sounds potentially worm-related, so Sarah assigns Ali—over her hilarious protest: “I’m really more of an idea person”—to get to the bottom of it. She in turn sends Donnie and Felix to infiltrate Lifespring posing as a gay couple trying to conceive.

Felix gives Donnie a brief lesson in why his mincing gay impression is offensive on several levels, we get waaaay too deep a glimpse into Donnie and Alison’s sex life (it involves a very bad Italian accent and some awful airplane puns), and eventually they discover that Lifespring offers a special program called Brightborn.

What’s Brightborn? The promotional video, starring none other than former Leekie colleague Evie Cho, lays it out: You too can have a genetically superior baby! The details aren’t spelled out, probably because face maggots don’t play particularly well in promotional materials.

Meanwhile, the other clones continue to be sorely underused this season. Can someone please give them something to do already?

Helena continues to putter around the Hendrixes’ house, presumably eating everything in their fridge while she waits for her twins and/or a real storyline to come along. Donnie helpfully suggests that maybe crafting collages of cute babies isn’t the best use of her time, considering she’s the houseguest of a woman who’s infertile and none too happy about it. Helena characteristically overreacts, taking this (along with the fact that the police are sniffing around about the Portuguese drug dealer murders) as a good excuse to hit the road.

Rachel continues to putter around her cell plotting the overthrow of Neolution or whatever. Susan gives her an impossible choice to ponder: They can try an experimental treatment that could (but probably won’t) save Charlotte’s life, or they can let her illness run its course, which will kill her, but give them valuable data that could save other clones’ lives. Despite the bond she’s been forming with her cell-child, Rachel chooses the latter. Because she’s nothing if not a cold-hearted bitch. Susan rewards her by revealing that she knows about the secret messages, so there goes any link she has to the outside world.

And Cosima continues to putter around the lab, getting in a good dig or two at the late Doctor Leekie (“Who’s the science now, bitch?”) as she and Scott get a good dig or three into his literal decomposing skull. Alison was right: there is an actual living (and/or still operational) maggot-bot in Leekie’s dead head. They’re still stumped as to what it actually does, though, until Scott notices that it has left glowing tissue behind. And by a leap of science logic, this means that the purpose of these nasty little buggers is to rewrite their host’s DNA.

And when you combine that with Trina’s comment that she was a “carrier,” plus the fact that Evie Cho wants to create a race of superbabies, and oh let’s not forget spooky little Kira’s spooky little vision that the clones had to set her mom on fire “because she was changing,” it all adds up to something very, very creepy. A creepy thing happening inside Sarah. 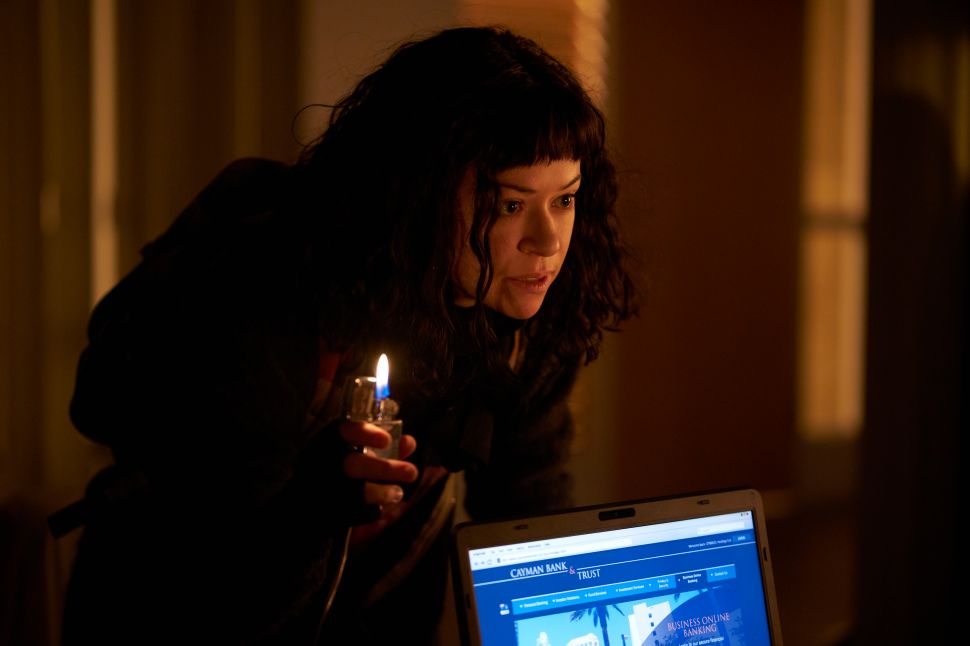