Since the beginning, that’s been the basic viewpoint of Orphan Black: Sarah and her sisters are our heroes, and yet the process that created them is the overarching evil of the show.

And that’s what lends the show’s universe its compelling moral complexity and ambiguity. We’ve been presented with a rogue’s gallery of villains and sinister organizations: Leekie, Rachel, Coady, Susan; Neolution, Dyad, Topside, Brightborn. But far from being a unified conspiracy of malevolent scientists, soldiers and businesspeople, it’s a chaos of individuals and groups, each with their separate beliefs, goals and needs.

So our heroes, forced onto this stage of shifting alliances, are often fight these groups, but at other times they find themselves aligned with some against others. Any given villain turns out to be somewhat less than absolutely evil. Because, above all, they’ve all shared a common investment in the cloning project, in seeing the experiment continue. Until now.

In Evie Cho, Orphan Black has finally, after three and a half seasons, given us a unambiguous villain, a big bad who wants to exterminate the clones and do away with cloning altogether. And man, did they ever make her easy to hate.

Every bad guy on this show wants to play god, but where Susan Duncan’s vision of divinity is maternal and wise, Evie’s is tyrannical and cold. She believes her new technologies, which rewrite DNA directly, have made the clones entirely obsolete. To Evie, cloning was a crude, generalized attempt to solve genetic problems, while her bot-based DNA “line editing” is precise and direct. And so it is time for the clones and their creator to fade into obscurity or worse, while she and her Brightborn babies create the future.

Of course, it’s totally weird to call another technology “crude,” when yours involves a) putting poisoned maggot-like robots inside people’s faces b) maintaining a baby farm where poor women used as human incubators, and c) a trial-and-error process in which the majority of babies are born horribly deformed. Whereas the primary outward result of the Duncans’ project? Dozens of beautiful and talented women. Sure, lots of awful things have come out of cloning too, but it’s hard to really regard Evie’s approach as somehow “purer” when her main products so far have been cheek worms and hole-faced babies.

But she believes that she owns the future, so Evie aims to take over Neolution. And to do so she’s got to cut off its current head: Susan. In flashbacks, we learn that it was she who put that gun in Beth’s hands and that Brightborn ID in her pocket. It seems that Trina Magnetfingers led Beth to Brightborn, where Evie convinced her that Susan was the root of all of the clones’ troubles (arguably true), and that the solution is to kill her off (nope).

So Beth puts on that stupid blond wig and goes to do the deed. But when she has Susan on her knees in a bathroom, gun to the back of her head, the good doctor says, without apparent subterfuge, “I love you.” That she loves Beth and all of her sisters, and would do anything to protect them. Beth can’t have heard those three little words in quite a long time, if ever. So she runs off without pulling the trigger.

But then how did she end up with those bloodstained hands we saw on video, you might ask? Back in the present, Art and Sarah are wondering the same thing. Because they don’t know who the real villain of the story is yet.

Sarah is still caught in the web of those ambiguous alliances, trying to make a deal with Susan and Evie to save Cosima’s life and get the maggot out of her face. In exchange, Neolution wants Kendall Malone’s unique genetic material—the only DNA in the world that will allow them to making cloning work.

One problem, though. Well, two: Mrs. S isn’t going to be on board with selling her mother’s genes to their enemies. And even if they get her to agree, there’s still the little matter of the Castor clones and their poison sperm. Castor boys cause sterility in the women they have sex with—Sarah calls them a living biological weapon. And giving Neolution the recipe to cure Cosima also gives them the recipe to cure Castor, arming the weapon, so to speak.

Luckily Kendall has an answer for both problems. Once she’s agreed to help, there’s little Mrs. S can say—and despite her uber-crotchety exterior, Kendall has turned out to be quite the softie, especially when it comes to her genetic sisters. And as for the Castor problem, ] now Kendall finally has a reason to tell everyone she’s dying of cancer. Because only one set of the two sets of genes she has in her body has the cancer—the female set. And enterprising lab rat Scott can thus separate the samples and give Neolution only Leda genes, no Castor ones.

Needless to say, this is not welcome news to Susan’s pet clone Ira, but she ignores his protests and goes ahead with the deal anyway: In exchange for Kendall’s genes—plus all of Cosima’s research on the clone cure—Team Sarah gets the completed cure and the maggot removed from Sarah’s cheek.

Everything starts as planned. Sarah gets her bot out, Cosima hands over all of her research on a Brightborn-supplied hard drive, and Scott takes Kendall’s blood and begins separating the samples. That’s when everything goes pear-shaped. On her way back to the safe house, Kendall’s driver is killed and she’s abducted, Meanwhile a virus uploaded by the hard drive erases everything on Cosima’s lab’s computers. Sarah gets to the lab in time to stop the deal, pouring bleach on Scott’s samples. Not that it matters, since they now have Kendall herself.

Not that that matters, though, because Evie Cho doesn’t give a crap about Kendall’s DNA. She doesn’t care about cloning at all, beyond the fact that she wants to wipe the whole clone project off the map, so that her worm/baby tech can become ascendant.

After a brief detour in which they think maybe it was poor jilted Ira who did the Kendall-snatching (in fact, all he did was try to kill himself), Sarah figures it all out: It was all Evie, since the beginning.

Evie gave Beth the gun and set her on the path to kill, not only to get rid of Susan but also to put an end to the clone project. Because once a self-aware clone killed their head scientist, Topside would have no choice but to terminate the others.

But Beth was a detective—even in her drug-addled state, she finally puzzled out what was really going on. So she knew that when Evie told her that she was the one putting her sisters in danger, she was telling the truth. She pistol-whipped the shit out of Evie instead—that’s where the blood on her hands came from, as well as the prominent scar on Evie’s cheekbone—and then went to kill herself. In the end, then, her suicide was all to save Alison and Cosima. A tragic end to Beth’s sad, sad story, which we can finally see the full dimensions of.

And in the present, it is Evie behind the double-cross, sending dirty Detective Duko to kidnap Kendall while she grabs Cosima (but not before Cos slips the maggot-bot into her pocket). And after a Bond villain-style monologue, she has Duko shoot Kendall, right in front of a horrified Cosima, then sets her on fire to erase all of her DNA. Because, she tells Cos, your way, the clone way, is old-fashioned, obsolete. “You’re Betamax,” she tells her, which would be hilarious if she wasn’t saying it to justify destroying everything Cosima loves.

All in all, a very grim episode. It answers a lot of the questions that have been left dangling until now, but also gives us little of the comic relief that generally makes Orphan Black’s bleak proceedings bearable. Alison and Donnie were entirely absent, Helena’s still off god knows where killing god knows whom/eating god knows what, and the only glimmer of humor was Krystal appearing at the police station shouting that cosmetics companies are trying to kill her. Art assigns Felix to handle her, and he adorably shows up kitted-out in Sherlock Holmes couture claiming to be a Scotland Yard detective. All of which is entirely lost on Krystal, who promptly maces him in the eyes. After that episode, I’m sure we all pretty much know how he feels. 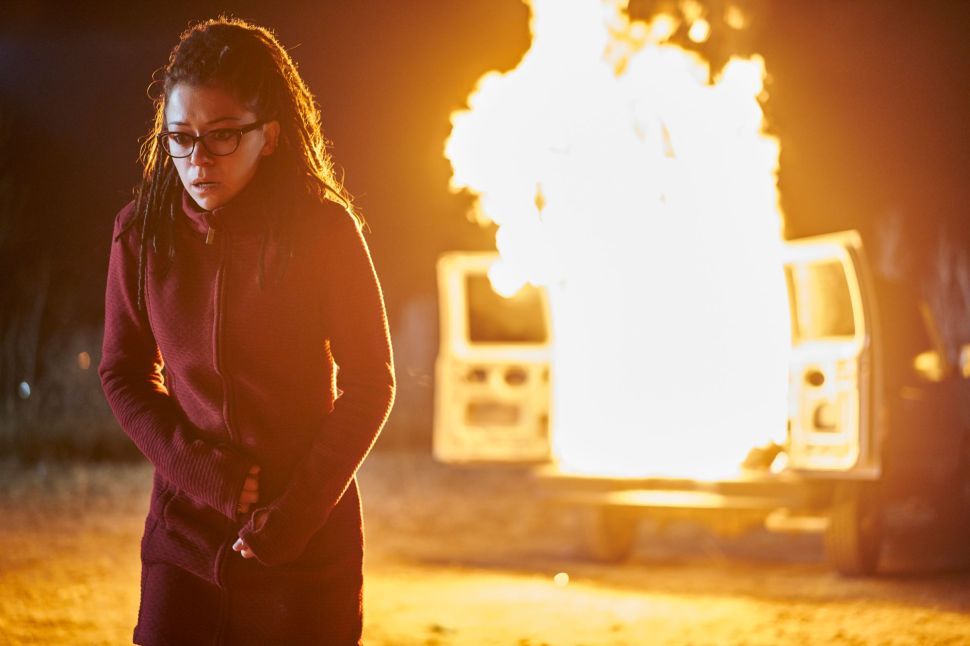