And once again it’s time for us to play our favorite game: Which Clone Has It the Crappiest? This week: a special Kendall Malone Is Dead edition.

Sad times are upon us: None of our girls are dealing particularly well with their grandmother/sister/genetic original’s untimely demise at the hands of Evie Cho and her pet cop Martin Duko. Most of them seem pretty determined to use their anguish to fuck up their lives even more than they already are. And it’s up to their surrogate families to pull them back from the brink at the last minute.

So, starting our roster from the clone with the least-crappy (but still totally awful) life, we’ve got Alison, who is dealing with her grief in characteristic Ali fashion by sublimating it under seven layers of etiquette, housework, crafts, and entertaining. In between trying to compose a thoughtful note to Mrs. S, she’s putting the finishing touches on her daughter Gemma’s overly elaborate and planned-to-the-millisecond birthday slumber party. But sweet Donnie, knowing his wife has a tendency toward denial, invites their pastor over for the party, just in case she needs to talk, which throws her plans off.

Not that any of that matters anyway, because what really throws the party off is that the cops storm the house and carry Donnie away in handcuffs just as he gets to the climax of his slumber-party ghost story. See, Detective Art, seeing as how Duko just set a friend of his on fire, finally had enough of his cat-and-mouse with Detective Duko, and he kicks the crap out of Duko at the precinct. Instead of fighting back, though, Duko decides to get his revenge by moving against the Hendrixes for their pill-dealing past. And now erstwhile drug kingpin Donnie (I like to think of him as the anti-Heisenberg) is off to prison.

Having only a slightly shittier time is Rachel, who’s finally been let out of her cell only to find she’s still trapped on a remote island. Susan just let her out. There’s no point in keeping her locked up anymore anyway—now that the genetic original is gone, the clone program is all but over. This is formalized in a conference call with Evie Cho, in which she officially takes over Neolution, kills the clone program and announces that the self-aware clones (i.e. all of our heroes) will now be terminated. Rachel offers to help with that side of things, and basically gets told sorry, clone bitch. You know you’ve never actually had any authority here, right? You’re the object of our conspiracy, not one of the conspirators. And in case you weren’t listening, the time of the clones is now past—you along with them. Buh-bye.

So instead Rachel limps around the beautiful lonely mansion on the beautiful lonely island, knowing that one day she’s going to die a horrible death and there is nothing she can do about it. And takes her grief out on poor little Charlotte by summarily telling her that she’ll be dying that same awful death even sooner.

To round out her horrible day, Rachel starts seeing something that obviously isn’t there—a swan hanging out in the living room. She’s not hallucinating so much as seeing some kind of against-her-will augmented reality. Seems that bionic eye of hers is more than meets the…well, yeah.

Blowing them both out of the in terms of shitty lives, though, is Sarah, who blames herself for Kendall’s death. Mrs. S blames her too, and it’s not hard to see why: Desperate to get that robot worm out of her face, Sarah made a deal with the enemy, and they all got screwed over, Kendall obviously worst of all.

This being Sarah, she deals with her guilt by compounding it, taking Mrs. S’s blame as a full-scale rejection and running off, leaving Kira behind yet again.

She walks headfirst into a full-scale bender, pounding shots at a dive bar that coincidentally happens to be hacker Dizzy’s local watering hole. It also happens to have Peaches onstage as its headlining act, meaning either it’s a total TV fantasy version of a dive bar, or I need to start spending a lot more time in Toronto.

Sporadically hallucinating a spectral Beth looking over her shoulder, Sarah goes deeper and deeper into the dark night. Getting off with strangers and snorting their drugs, trying to screw Dizzy (who’d rather talk about how she got that maggot out of her face), and finally ending up on a bridge over some train tracks, not-coincidentally a lot like the place where Beth killed herself. After a drunken argument with her hallucinated sister, she seems pretty determined to go the same route as her.

Luckily, Sarah has a) a brother who loves her and b) a daughter who is quasi-psychic. Felix goes off in search of her, storming at Mrs. S that they need Sarah—she’s “the glue that keeps us all together.” While he’s out trying to track her down in the grossest bars he can find, spooky spooky Kira tells Mrs S that she doesn’t think Sarah is coming back this time, since this time “she’s following Beth.” Armed with that new info, Felix finds her on the bridge and talks her down. As vision-Beth echoes his earlier words, telling Sarah that she’s the only one who can save all of her sisters.

And finally, our winner and still champion of the shitty-life lottery: Cosima, the only sister to actually witness Kendall’s murder. Traumatized by the experience—not to mention sick and getting sicker and having just watched the only chance to find a cure go up in smoke, Cos grasps at any small hope she can find. She decides that maybe the maggot-bot she stole after they took it out of Sarah’s cheek could hold the solution.

This has to be some kind of grief-induced stupidity—Cosima’s supposed to be the smart one, and this makes no kind of logical sense. But not thinking clearly, Cosima locks Scott and Hell-Wizard out of the lab and then proceeds to cut her own face open with a scalpel to put the maggot in. Which, who knows if that’s how it even works? Cosima is way way off the rails here.

So he’s about to stick a poisoned evil robot inside her cut-open face when Felix calls with pertinent information: Delphine may still be alive! And Cosima, worn out and crazed and hanging onto the only hope she has left, puts down the scalpel.

For those of you keeping score at home, that’s Felix: 2 — Terrible, life-altering decisions by grief-addled clones: 0.

Sarah stumbles her way back to the safe house, where Mrs. S sorta kinda forgives her, or at least cooks her breakfast. But all is not well in Mudville, that’s for sure. And, oh yeah: M.K. is back, popping up spookily on spooky Kira’s computer. To fill her head with all sorts of murderous and/or paranoid schemes for the last three episodes of the season. 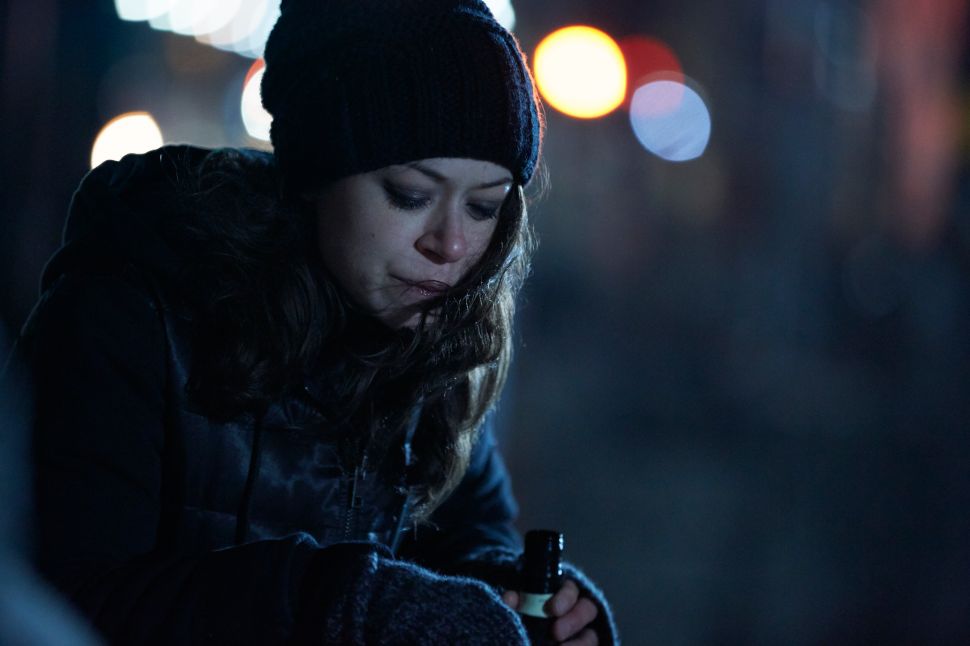